The Gluten Reintroduction Experiment has been accelerated over the holidays. Our nascent Bible Study spent over two months meditating on Luke 10:1-12, in which Jesus says twice to the 72 disciples he sends out, “eat what is put before you.” Since (in 10 days now, eep!) we are going to be guests in a very different environment from that we are used to, I am highly motivated to be able to eat as much of what is put before me as possible.

Don’t get me wrong; I know that you can be a gracious guest even with very severe dietary limitations. In fact, I know that having those limits has a way of making hospitality even more powerful, since you are dependent on your guest not just for food, but for grace.

But as you know, if you’ve been reading along, my gluten-free journey has been a little unusual. I had good reason to try it, and I’ve had some big turnarounds, but there are confounding variables to rule out, and I don’t have major gastro-intestinal consequences if I go astray.

Put briefly, gluten-freedom has been good for me, but I don’t have celiac. I know I’m sensitive to something, but it doesn’t seem to be gluten itself. And since my major motivation had to do with having safe hormones for pregnancy, and I’m well past the point where slightly fluctuating hormones would endanger little girl #2, this trip has motivated me to mainstream my diet as much as possible within the limits of health and safety.

Ugh, that was entirely too long a preamble for a post that is just going to be pictures of bread.

Anyway, my next mission, having established that sprouted bread, soaked breads, and traditional sourdough breads (that rise overnight) are really and thoroughly OK, at least with my fresh-ground organic wheat, my next goal was to try what I think of as a truly “ordinary” bread recipe. Like one involving yeast, rising for a couple of hours, baking, you’re done.

This is significant because you’re getting pretty intact gluten and wheat bran that way. Soaking and sprouting “pre-digests” the wheat, so to speak, and a shorter resting/rising time takes that away (though the gluten does change and develop if the bread is rising at all; it’s not the same as eating straight flour.)

For the next loaf, I wanted to use my own fresh-ground whole-wheat organic flour – the same stuff I’ve been using. No need to add extra variables, right? Well, finding a recipe for an ordinary 100% whole wheat loaf was harder than I thought. Bakers, it turns out, are opinionated. It was hard to find a recipe that didn’t include some what flour, or vital wheat gluten, or something I wasn’t ready to introduce yet. I found myself drowning in artisan bread forums, starting gargantuan facebook threads, facing dire warnings that if I didn’t tread carefully, my bread would not rise! Gasp and horrors! I would be a failure as a baker of bread!

As you can see from the pictures above, it rose just fine. And as you can tell from my sarcastic italics, I wasn’t that worried about it.

I landed on this recipe from Bob’s Red Mill, after it was recommended by a couple different people. For this first batch, I sifted out some of the bran (having been direly warned that bran will ruthlessly slice the developing gluten strands, so too much unsoaked bran means my bread will not rise), and I incorporated this handy windowpane test that a friend linked me to (having been direly warned that if I’m not sure I kneaded enough, my bread will not rise).

The recipe ended up being everything I ever wanted. The proportions of flour were perfect for my freshly ground and sifted stuff, and working it was a dream. If kneading could always be like that, I would fuss about it a lot less. The above picture shows “the crumb.” Good enough for sandwiches, and sandwich away we did.

Over the holidays, staying at my mom’s house meant I was in the presence of a long-time 100%-whole-wheat-bread-baker, and I wasn’t about to miss the chance to use her expertise (and her breadmaker). We whipped up a big batch of four loaves. (Same variables, but different recipe, and I left the bran in. The bread did rise, gee.)

I ate this bread for over two weeks with no ill effects. Ordinary bread with whole wheat, organic, freshly ground flour? Check! Time to party with a fluffy robe and pretend cupcakes!

Step the next? Ordinary flour. 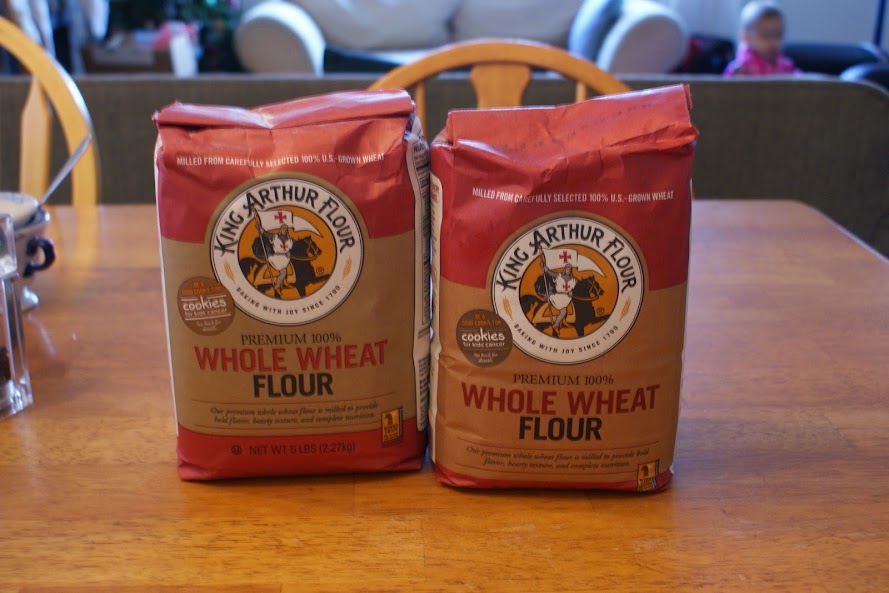 (Possible additional variable: I had bought this flour for forgotten reasons right before I went GF, so it’s been sitting in my cabinet for over a year. Probably not the best.)

King Arthur is probably the best option of mainstream flours, but it’s definitely not organic. (And obviously it was by no means fresh-ground, though the bags were unopened.) I used the same Bob’s Red Mill recipe, and my favorite bread-rising spot.

This bread didn’t rise as well, what with being red wheat, and I didn’t sift anything out. But it was still quite sandwichable. I ate it for five days with no ill effects, except that when I immediately scarfed down three pieces when it came out of the oven (doesn’t everyone do that with fresh bread?) I felt kinda sleepy. But I have plenty of reasons to be sleepy these days.

The Final Stage? Go to the store, buy a loaf of perfectly ordinary, whole-wheat-but-not-really, off-the-shelf bread. I had a sandwich out of some today and haven’t keeled over yet. Will report back when it’s been long enough to draw some conclusions.

One thought on “The Bread Report: The Last Homemade Experiments”