It was a normal evening in my bi-weekly knitting class, when a participant sitting next to me mentioned casually that she had some Noro leftovers. Some leftovers from the several Noro blankets she’s knit over the years. She so didn’t know what to do with them that she gave some of them away to a flower conservatory.

“You gave them Noro to tie up flowers with?!” I said. “Well if you have any left, give it to me!” 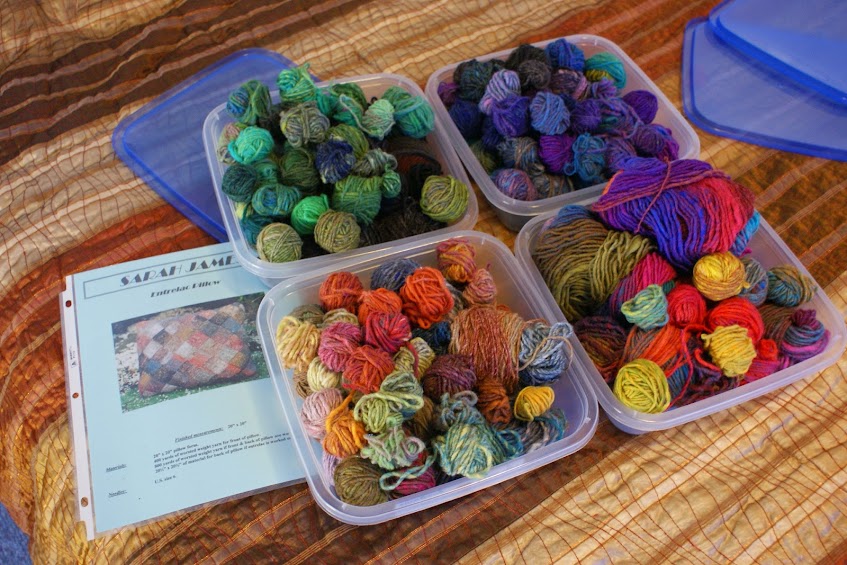 These words existed my mouth almost involuntarily, my mouth ignoring the fact that I’ve barely bought yarn in a couple years, and have been trying to severely curb my stash problem.

Oh well. It didn’t matter, because as soon as the immense bag of tiny gradient balls entered my hands, I was possessed by a single idea: Entrelac pillows.

I’d never actually done Entrelac before, though I’d helped enough customers figure it out that I got the idea. And I loved Entrelac done in Noro. And since nearly every year for Christmas, I end up knitting something cute and homey for the ladies in our family, I thought I’d be proactive with myself and plan the pillows. It was October; surely I’d find time! Serendipity was in the air when I discovered that I had a perfect pattern in my stash of physically purchased patterns. Do you know how often that has happened? Exactly never.

So I got started sorting. I started by arranging the little scraps into four color groups, as you see above, making sure there would be enough by weight per the pattern (Entrelac Pillow by Sarah James). Then I had the delectable duty of arranging all the little balls into a custom gradient: 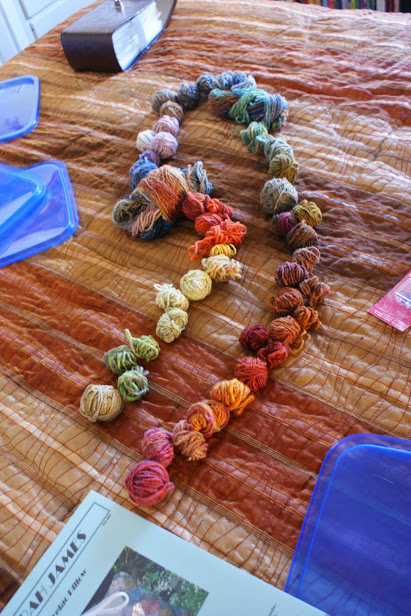 And the slightly less-fun task of winding all those tiny ball-snakes into balls. (I just put knots at each join, planning to spit-splice the ends later. I explained this to the yarn donor later, she said “do you have any spit left?!”) 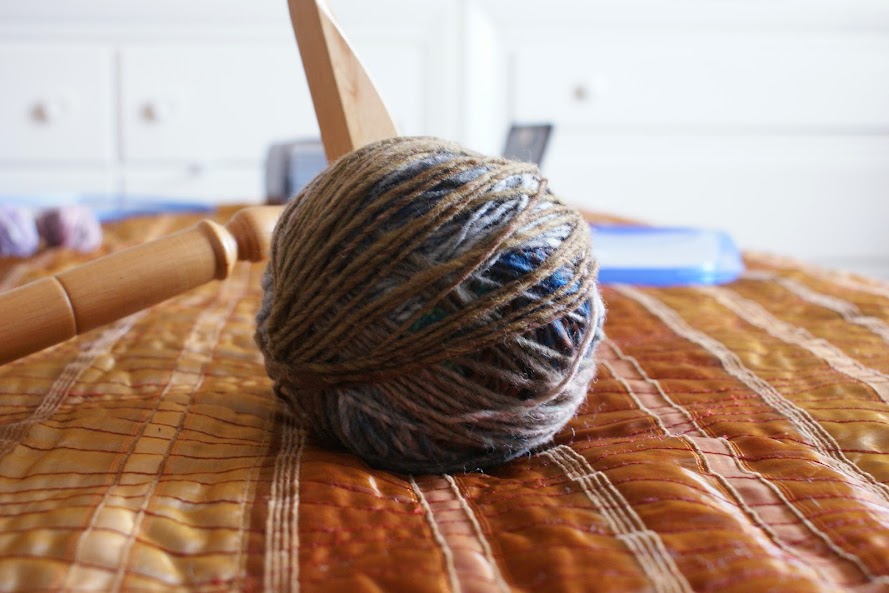 It turned out that the only way to effectively swatch in Entrelac is to knit an entire miniature Entrelac square. It ate up a couple extra days of scant knitting time, but I’m glad I did it. My initial cast on was way too tight, and to fit the pillowforms I’d bought, I had to adjust both the number of squares in a row and the number of stitches in each square. 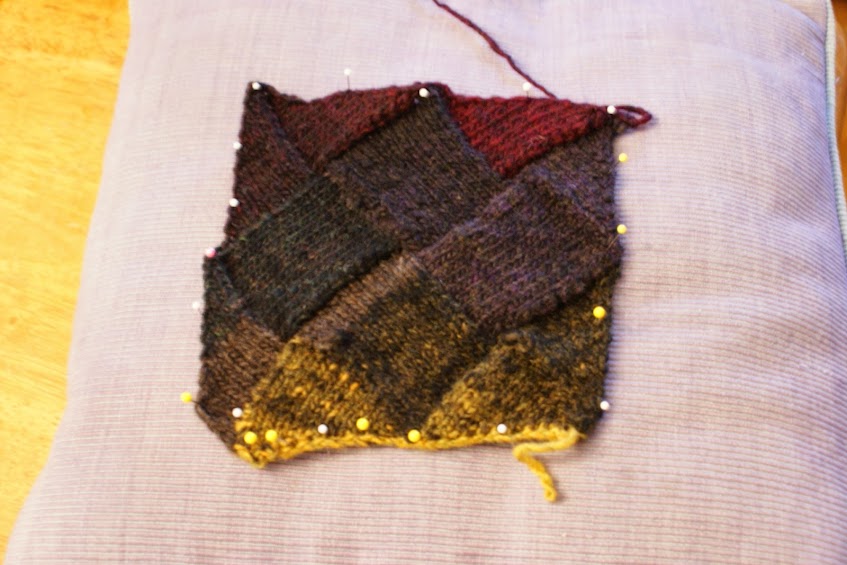 But soon I was off like a shot. The first pillow cover seemed to take forever, but as the days ’till Christmas got into the single digits, things got serious. 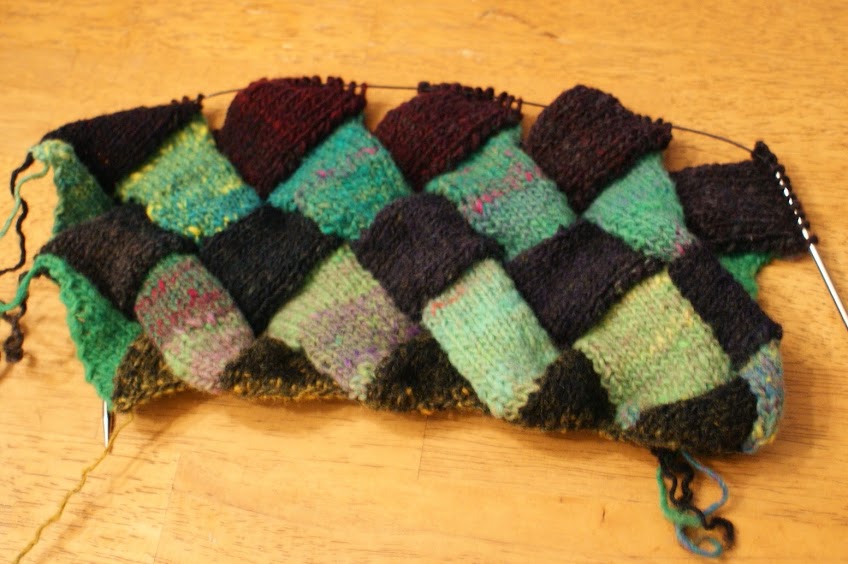 It shows my lack of forethought, or overabundance of craftual optimism, that I didn’t really see it as a hurdle that there would be a lot of sewing involved in making pillow tops. No offense to all you lovely seamstresses, but I hate sewing. It stresses me out, and I spend the entire experience thinking “I hate this” over and over, and strategizing ways of arranging my life so I never have to sew anything ever again.

I realize some people must feel this way about knitting, and I am ashamed.

Thanks to a couple of late nights soon before we headed home, I had the sewn covers done, except for the slip-stitched fourth edge. I would end up attaching the knitted pillow tops with a sort of slip-stitch business too. 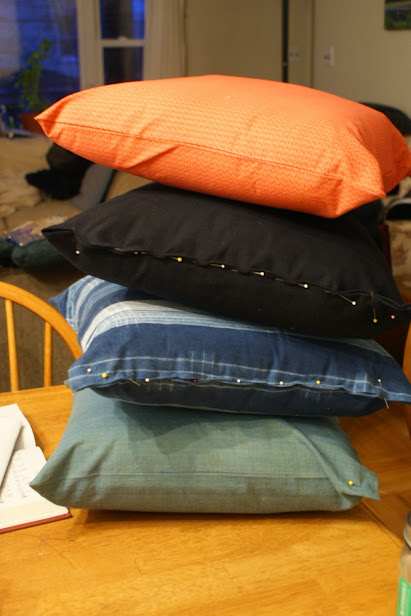 I found the Entrelac itself extremely fun. It probably helped that I more or less knew what I was doing, that the pattern’s instructions were pretty clear, and that I can knit backwards. I think if I had to turn for every row, I would get a little nutty. I can see how people get obsessed with Entrelac.

So here they are, completed: 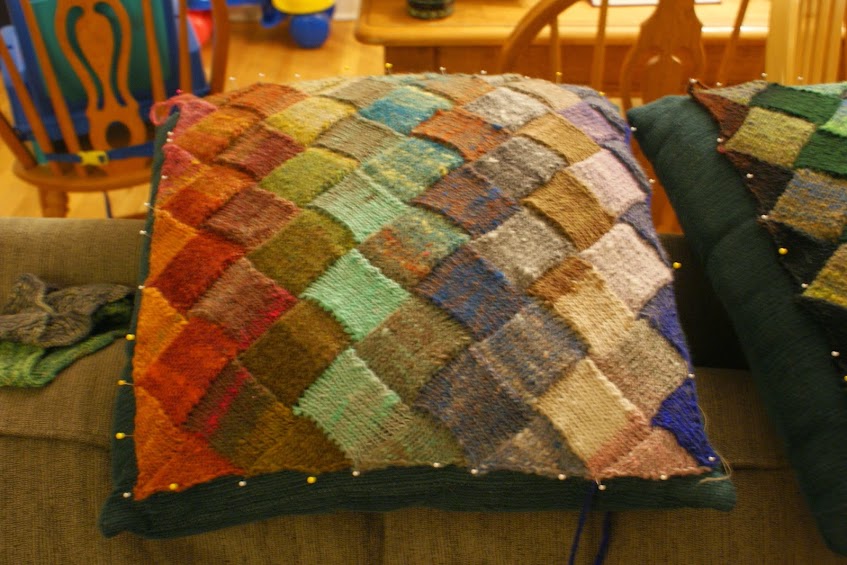 The earth-toned pillow, for my Grammy. In all the colors of her living room. (I confess, this was the hardest one to give away. And I was so busy staring at it when it was finished that I forgot to take a picture of the completed pillow before it left the building.) 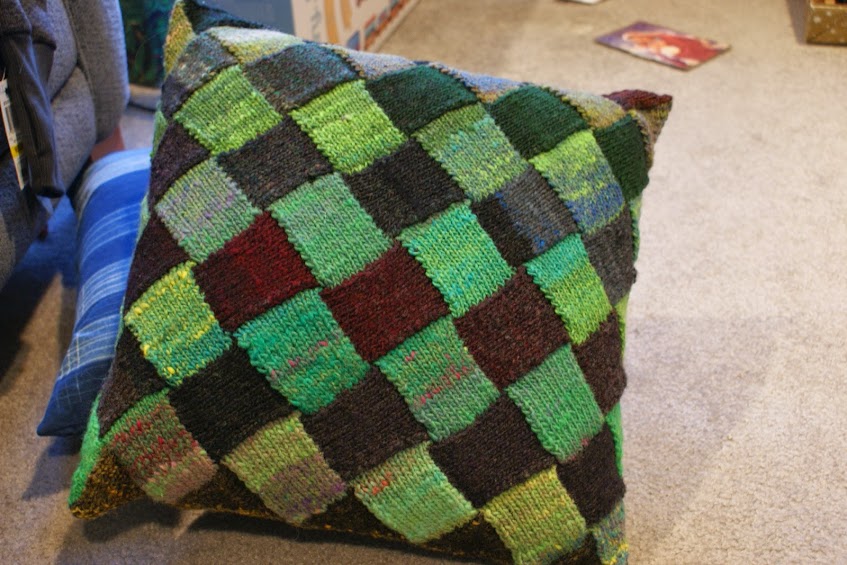 Green and black interwoven, for Jared’s grandparents. I thought the colors would work well on their forest-green leather couch.

Aqua grading into purple, for my mother-in-law – I was aiming for the colors in her living room, but realized this is also most of the colors she wears. 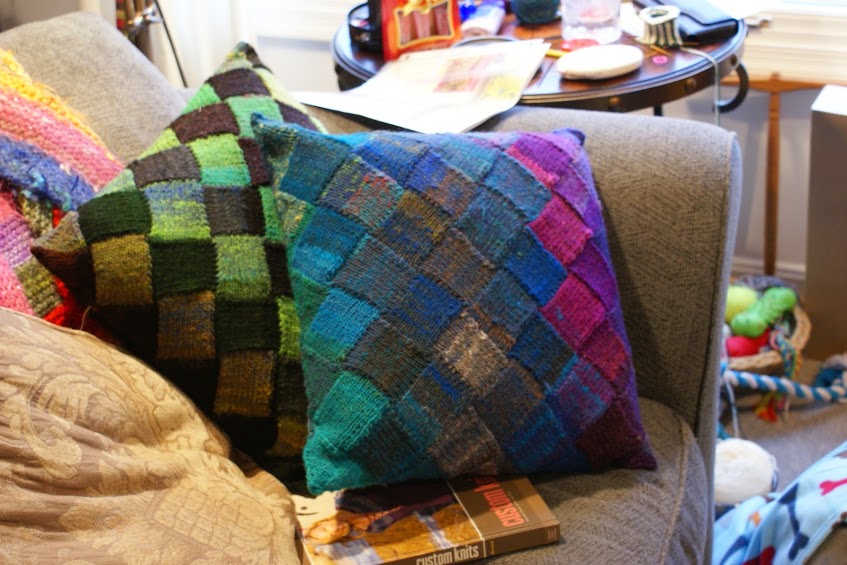 The fourth was meant to be for my mother, and was of course composed of all the most riotous brights, dominated by reds. But it was the one I didn’t even try to finish on time. Mostly because I felt least awkward about giving her something incomplete (she knits frantically for Christmas too, she gets it). Also, I may have given it a 50/50 chance that she’d want to knit it herself. Surprise, she did! (I’m sure it helped that I already had done all the sewing.)

Oh, how I wish I’d had time to make one for my grandmother in California, for my aunts here and across the country, for my pastor, or for myself! I was so bit by the Entrelac bug that I didn’t want to stop, even though the timing left me sewing pillow tops all through break. Every Christmas I tell myself I’ll do better next year, that by leaving more time I’ll somehow end up with enough time, when there is always the wish to do more. But hey, I got to knit three Entrelac pillows. And they are really cool.

6 thoughts on “Pillows for Mommies”