Oh dear me, my friends. As I’m sure has never happened to you, I, on this fourth Sunday of Advent, am a bit buried. I got as ahead as I could, tried to keep my expectations reasonable, thought things were going pretty well, then BAM reality check! It will take a bit of a miracle to get done everything that needs getting done by the time we leave town Tuesday. Which, because we serve a sovereign God, means that either (a) there will be a miracle, or (b) it will not all get done, because it secretly does not all need to get done in the grand scheme, and it will be OK. But in the meantime, here are a few random things that have happened lately:

All the blanket strips are done! Not only done, but blocked in time for the finishing class last Saturday. The pictures are crap, but I can’t tell you how beautiful the strips looked all lined up to dry on the futon. I was so inspired, I went and bought backing fabric for the thing during the annual trip to JoAnn’s for Christmas-related supplies.

The below is post-drying (or mostly-drying; I was a little impatient), me trying to decide on a final arrangement for the strips. In the end I think I switched the 3rd and 4th from the left, but otherwise I think I’m sticking with this.

The finishing class with my ladies was so fun. They all had vastly different color schemes, and it was delightful seeing their strips, sometimes helping them come up with a happy arrangement. 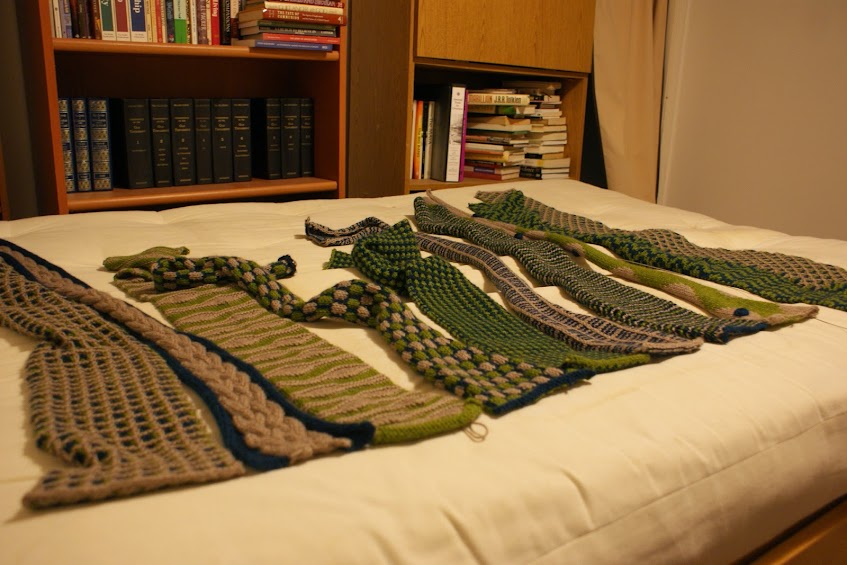 I did sew up the two leftmost strips for the sake of practicing techniques for teaching. But that one seam took me an hour and a half, so I very neatly rolled up the remaining strips and put them in a bag for Later. Because Christmas.

I’m not sure if this is funny so much as gross, but I rendered lard last week. 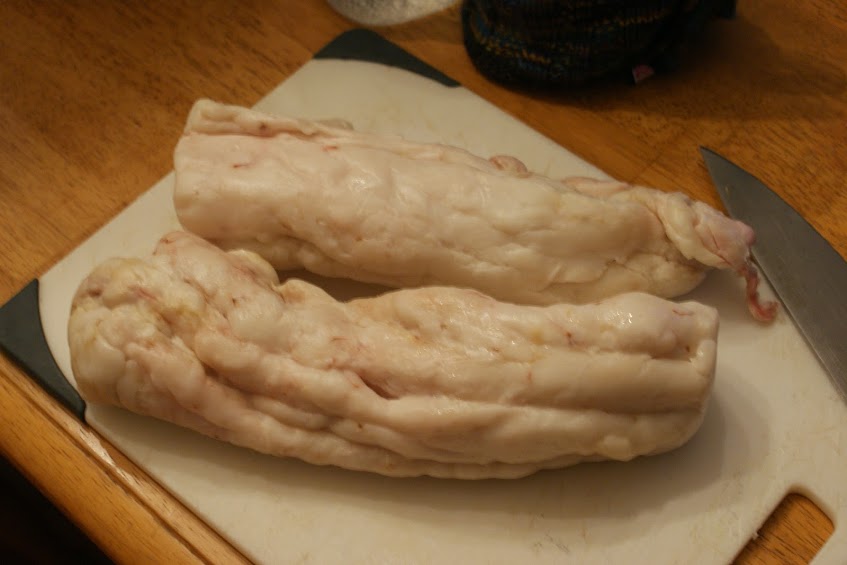 Back fat from a free-range pig. Cool, but undeniably grotesque.

Why on earth did I start this completely unnecessary project when Christmas was looming? (1) Because I hadn’t had my reality check yet. (2) Because in a fit of orderliness I organized the freezer, and it seemed perfectly logical to pull out the fat from our half-hog for rendering rather than stuffing it back in to be forgotten again. Because (3) I want pie crusts. And (4) because the directions I had found made it sound like a really easy project, that would only take a few hours of not paying to attention to a crock pot.

These were the directions I used. They were OK, I guess, but I didn’t realize until I was well and truly going that (i) the author never actually said how long the last step takes, (ii) she doesn’t include any directions on how to store the lard, (iii) she omitted that it makes your house smell like a deep fryer (though perhaps I was supposed to think of this myself) and it grossed my pregnant self out a little bit. And (iv) I’m pretty sure my crockpot cooks too hot to really render the lard cleanly. See how it’s boiling here? I don’t think it’s supposed to do that. 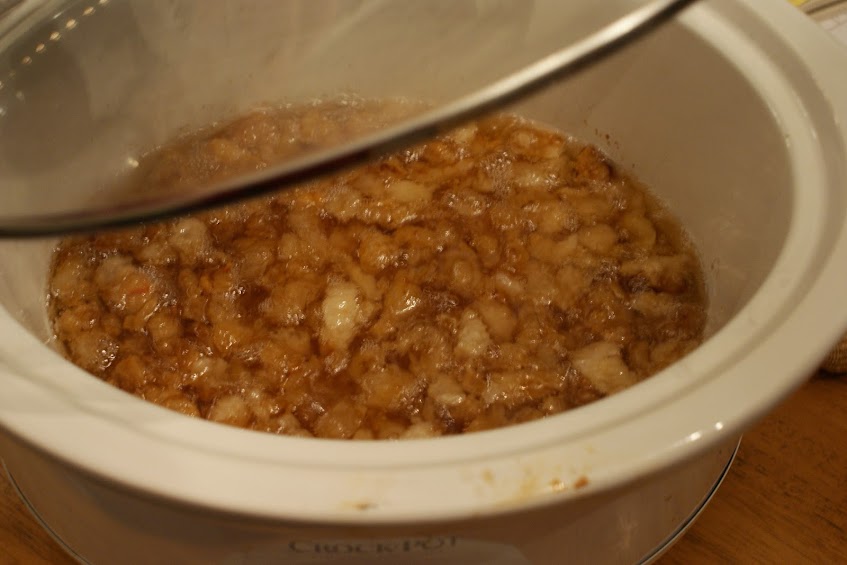 The cracklings are supposed to be delicious. Maybe they would have been if I’d let more fat come off, but it was 10:30 p.m. and I wasn’t ruddy well going to lose sleep for this project. I tried frying them up and everything, but they just blackened and were kinda gross. Didn’t stop me from snacking on them ’till I was oozing more lard from my pores. 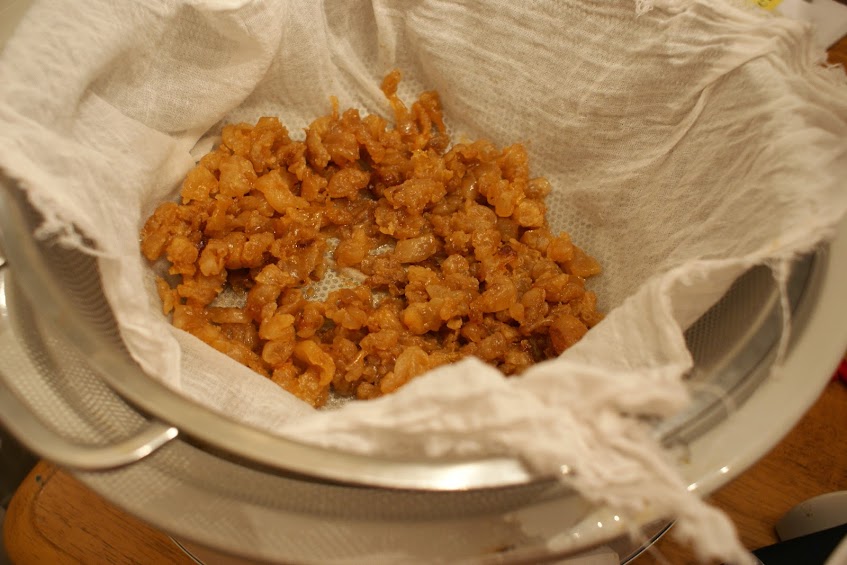 My one moment of triumph was guessing precisely that 5 half-pint jars would hold the liquid in the crock. I am the best at spacial volume estimation! Just kidding. No one is the best at that. I got lucky. 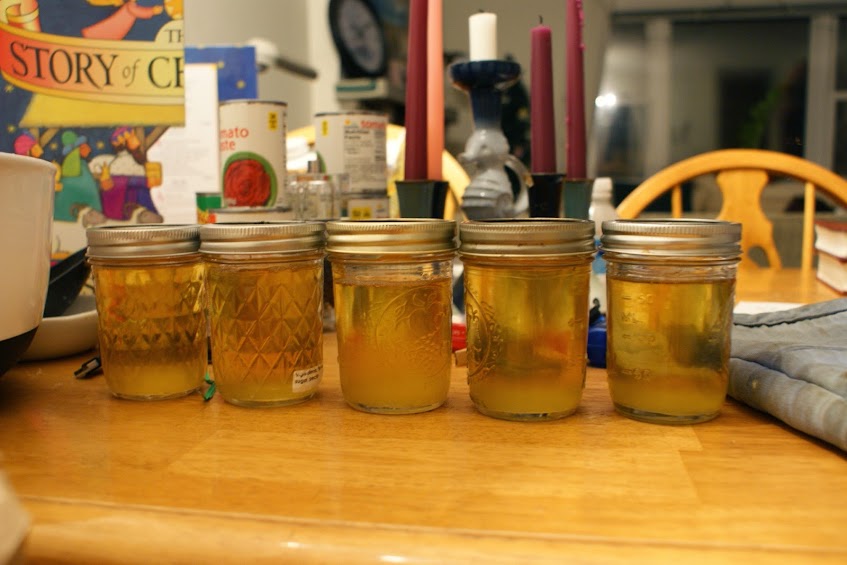 Once cooled, the lard does look quite beautiful. It was already really good in chocolate plum pudding, and I can’t wait to use it to make some pie crusts. However, like I said, I think my crockpot cooked it too hot, because it isn’t really a clean white, and it does smell a little “meaty.” Won’t stop me from eating it, since I know it was sourced really well from a happy free range pig, but I’ll store it in the fridge at least.

They’re so cute I want to put ribbons on them and give them away for Christmas. Because no one in my family thinks I’m weird yet.

In the midst of our crazy Sabbath preparation day yesterday, we managed to leave time to decorate the tree.

Our tree is fake and plastic and lived in a barn and is uneven and impossibly cluttered and I love it to pieces. 2 parts real memories, 3 parts nostalgia, 5 parts kitch. For example, how is it I have come to love the Christmas ball shaped like a giant hideous Yoda head? Because I remember getting it from in-laws the year Jared and I were just dating, so I couldn’t be officially included in the family ornament tradition yet. But they didn’t want me to feel left out. So someone got me giant Yoda head ball.

I did at least try to give Naomi a mini-speech about how the evergreen tree and the lights teach us about Christ being the light in the midst of our deepest darkness. It was a little weak. I’ll work on it more for next year.

I thought we were so on top of things by getting the laundry done, the packing started, the house clean, and all cooking out of the way before the weekend even hit. And hey, that was still a good move, and a team effort. But of course, today, the day I’m supposed to be resting, it comes crashing down on my consciousness that in the next two days I have not only the miles of entrelac, but the ironing and sewing, the wrapping, and the great Jenga puzzle that is the sending out of support letters.

I really really know how much it does NOT matter that I get all things done perfectly or on time. In the ways that actually matter, God will have to provide miraculously for us no matter how this shakes down. Walking precisely where God wants us right now, we still need to accept massive quantities of grace. Duh, God probably has us just where he wants us in order to continue to drive that home. But that doesn’t stop me from wishing I had an awesome Christmas spreadsheet that kept my life all organized. Or from just wishing that with everything else going on, that my psyche/hormones didn’t pick right now to get me in touch with my emotions (or maybe the Holy Spirit did that. She would so do that).

But good grief, I just can’t wait for these two days to be over, not at all because it’ll mark the end of the a crunch (it won’t really and I don’t care), but because I can’t wait to be home. Home with our families. To be there for them while two of N’s great-grandparents go through and recover from fairly intense surgeries. To give and receive and laugh and be exasperated and go see the terrible third Hobbit movie. To rediscover again what a stupid huge gift every one these people are.

Now I’m sniffling. At some point I’m allowed to just blame it on the hormones and eat some chocolate.

Oh, and you should go read Like Mother Like Daughter, whence this {pfhr} thing originated. They’re lovely and sensible and take pretty pictures.

One thought on “{pretty, funny, happy, real} edition with lots of lists”