With all these food updates, you might wonder if I’ve forgotten how to knit. I wonder that myself some days, but the truth is that I have been knitting as much as ever. The trouble is, I can’t stick with one of these projects long enough to finish. I’ll be really into a project for a week, then I get bored and try another. It’s as if I’m anticipating my hoped-for monogamy by being as unfaithful as I can while I can. Still, as bachelorette parties go, this one is pretty subdued. More like getting a beer with old boyfriends than a wild night on the town.

The cumulative effect is that I feel like I’ve been getting nowhere. That really isn’t true, but I have to post about these works-in-progress – and compare with the last tally – to prove to myself that I haven’t fallen into some sort of inescapable knitting black hole. 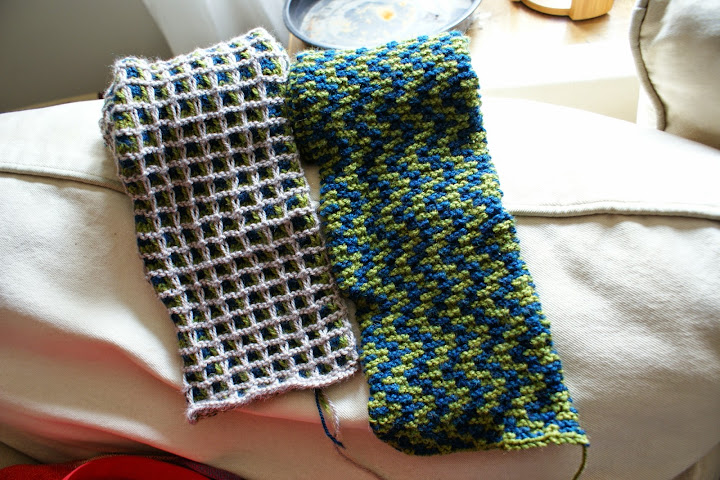 I started by really pouring the sauce on the colorful blanket project. I had to be ready for my next class, so I finished the highly entertaining strips #6 and #7, and started on #8. This strip is really fun and gratifying, but after a few days I just… stopped knitting it. I didn’t start actively disliking it as much as I drifted away into negligence. How many of my relationships end like that? Good heavens, that is a depressing thought. Stings ‘cuz it’s true!

Class is on Saturday, so I’ll have another month at that point to get through #8 and start #9.

When the blanket lost my attention, I put some focused effort into the Canal du Medi socks. I really enjoyed the first one: the colorway was entertaining, the traveling stitches not too demanding, the repeats quick. But the relationship started to sour about halfway down the foot. It kept taking longer and longer than I thought to achieve the desired length. Then I botched the toe completely (distracted by Doctor Who, I can’t blame the sock, as easy as it would be since it isn’t going to defend itself) and so had to do it twice.

Forcing myself to start the second sock required overcoming a tremendous amount of inner inertia. I felt like I was trying to get a teenager out of bed for school on Monday morning, except the teenager was me. I forced myself to stick with it during a week that we had lots of driving around, but a creeping sense of resentment was growing stronger every time I pulled the project bag out of my purse. When I got through the ribbing, I decided we needed some space. 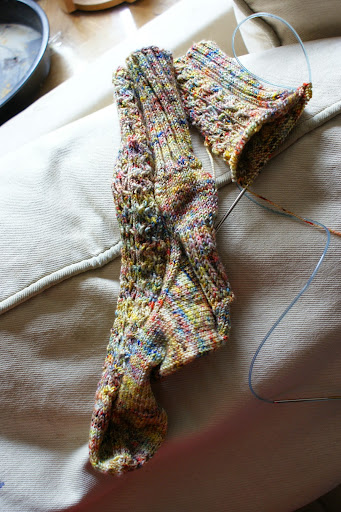 I have been getting some reading in, about everything from small groups to women’s ordination to dystopian sci-fi to potty training, so I’ve made enough progress to surprise myself on the colorful gradient weaver’s wool shawl. I actually started the last color.

That is, I started the last color, only to immediately find that the outer layer of the ball had been chewed to bits by moths.

The only thing worse than finding a dozen breaks in your yarn, is finding half-breaks in your yarn. These breaks I always find after the fact, since the yarn doesn’t break with the initial stitch, but with the stress of being knit into on the subsequent row. When said stitch comes at the beginning of a row that takes a half hour to knit across – meaning to fix it I have to undo nearly an hour’s worth of knitting – this makes one rather grouchy.

The yarn is salvageable; I went through the whole ball and threw out all bits that were too short to do more than a foot. The rest I’ll spit-splice together to avoid an impossible number of ends, even though spit-splicing superwash is difficult and somewhat unadvisable.

What a surprise that I haven’t been doing as much reading since we suffered that little moth episode.

Also somewhere in there, we’ve listened to about an episode and a half of A Prairie Home Companion. As a result, I’ve done a grand total of three rows on the reward sweater. Not even kidding. This pattern is taking forever, and I’m getting a little discouraged. 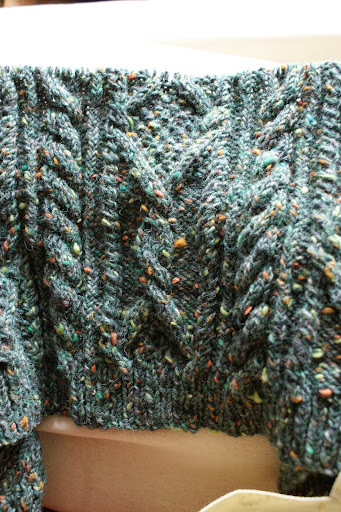 In fact, the only project on the needles that  I’m not downright peeved with at the moment is Evenstar. The second chart starts out with very boring, large leaf shapes, then gets more and more interesting at the top when the leaves are multiplied and then interspersed with little stars. I’ve been knitting on nothing else for nearly a week now. 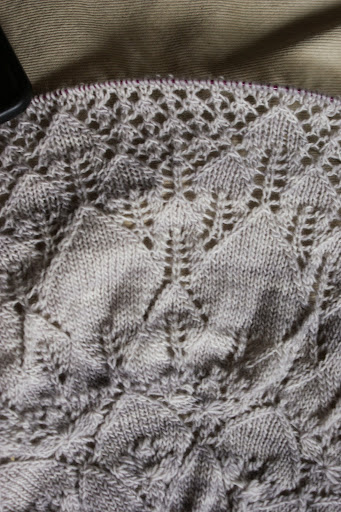 Now with two out of three charts done, I really feel like I’ve made progress. However, that’s the deceptive thing about circular shawls; I’ve only done about a quarter of the knitting. So I’m sure this beautiful shawl has its fair share of breaks ahead of it.

Of course, I haven’t touched the spindle spinning, which will probably take the least time to finish. Figure that one out.

I am still glad to be working my way down through this ungainly collection of large projects, and I know it is a mathematical certainty that I am making progress. But I feel a collective UGH about these WIPs right now. Can you feel it too? Say it with me:

I’m sure my diligence will pay off. But I know what I really want to be knitting right now is new wee baby things…