Saturday morning meant stop 5 on our yarn crawl adventure, and it was the stop closest to home: our very own Yarns Unlimited. 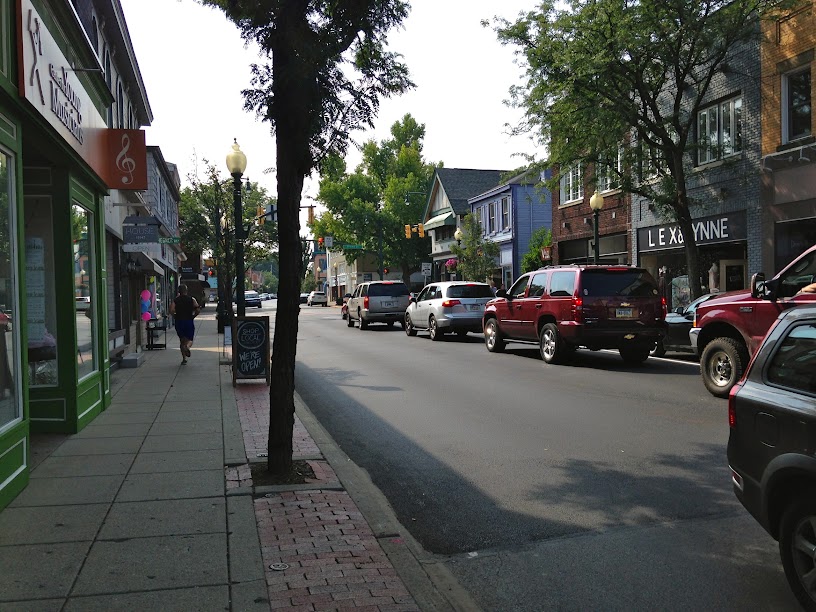 Sewickley is a very fun place to visit; at only ten minutes from home, it is a frequent escape when we need a little froofy prettiness. There are boutique clothing stores, good food (pricey or cheap), and a wealth of tiny small businesses. Unlike all our other stops on this tour, I know so many of them – the B Gourmet where we pick up our CSA, the Brueggers where I’ve gotten a bagel and lox on so many lunch breaks, the tiny toy store exploding with goodies, the new juice bar run by a fellow seminary grad, the random expensive linen store where the only item I could afford as a shower gift was a small linen bag with a picture of a shoe on it. It is a place worth stopping and getting to know, and I count myself lucky to live close enough to do so.

As for Yarns Unlimited… call me biased, but I have sung this place’s praises many times before and I will do it again. Having been under the same ownership for nearly 30 years, they have accumulated an absolutely stunning stock of yarn. For each ball you see on the show room floor, there is almost certainly a sweater’s worth in the basement. In the last couple of years, they have moved on a lot of their older stock and begun stocking more of newer lines, like Simpli Worsted, Juniper Moon, and Baah, to name just a few. They are also Rowan stockists, if you are into that incomparable British line of yarns, and have ample supplies of more mainstream brands like Debbie Bliss, Plymouth, and Berroco.

They had a Shibui trunk show going on at the time, which was the site of Naomi’s sad goodbye of Didi and Baba. From this store my mother and sister had to part ways with us, hitting the last two stores on their way home to Maryland. A month later Naomi still misses her favorite playmates; rarely a waking hour goes by that they don’t come up in conversation.

But though apart in body, we were together in shopping. 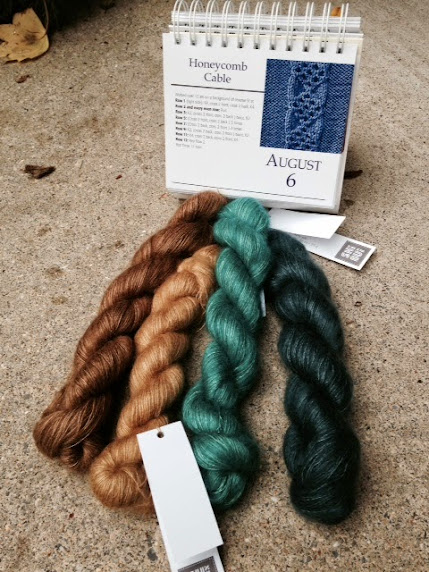 Mom fell hard for the Shibui silk cloud in these beautiful shades. I can hardly blame her, especially since those are all the colors I like to wear. She also got that neat never-ending calendar of stitch patterns.

As for me, the store had a display that I just couldn’t resist. The previous store had a supply of the Tulip Cardigan Kit, which I have secretly coveted for many a year. But at that price tag, and since the size only went up to 18 months, I couldn’t quite bring myself to invest. However, YU had a different plan. On display they had a tiny sweater made of brightly-colored solid stripes, and a big basket with a bunch of tiny skeins of iridescent yarn they called “Gumballs.” They offered an adaptation to a plain sweater pattern that would produce a little sweater out of 8 mini-skeins – choose your own adventure! Oh, what fun I had playing with the combinations! I settled on these 8, and plan to get cracking on them soon. (If I can keep Naomi from stealing the little skeins and hiding them. She thinks they are hers already.)

YU gave us our first real lace addition to the cowl, with a broad openwork pattern made with double yarn overs. I was worried the change in tension would be too drastic after the tightly-drawn-in slip stitch pattern, but it seems to be working out so far. 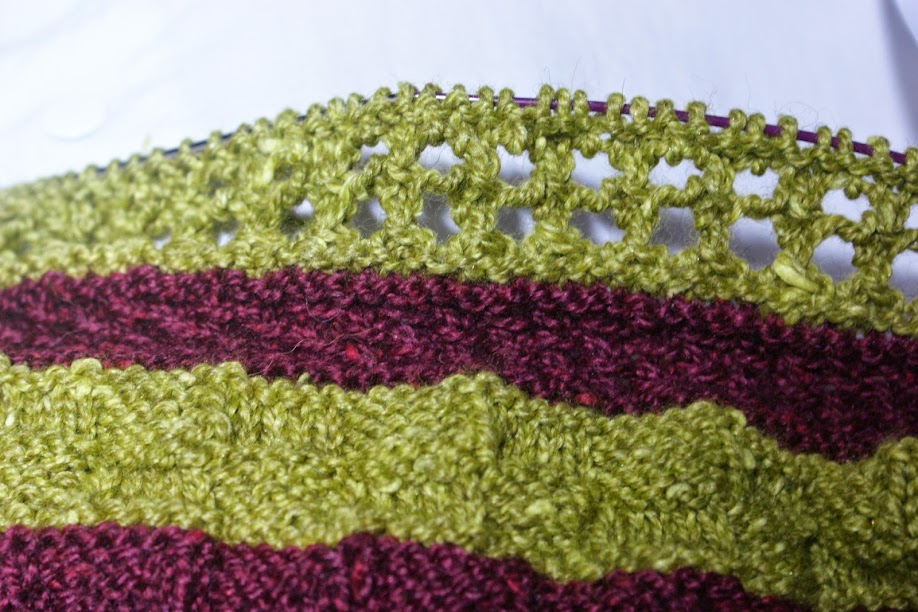 Tune in next time as we split the party to head into the city!