In August of 2011, Jared & I took a trip up to Toronto with our friends Allison and Seretha. Not unpredictably, we made just about every wool-related stop on this trip that we could find an excuse for. We may or may not have picked a campsite based on the fact that it was right across the rural highway from Philosopher’s Wool.

Seretha and Jared are both knitters (even if they aren’t as, well, intense about it as myself), so they participated happily in these shenanigans. Allison, however, doesn’t really knit. Allison, however, is also a really really good sport. So she bought some skeins along with the rest of us, having acquired my agreement to be commissioned to knit some things for her.

Well, that was over two years ago.

I’ve spent the last three years doing a lot of “work” related knitting, and somehow these items never made it to the top of the to-do list. I have several to-do lists floating around the bits and bytes of my computer – I’ve used paper, Google tasks, and most recently an app called “Wunderlist” – and all of them have had “Allison’s commissions” as an item on them. Still, they didn’t get knit.

As I was getting ready for the Next Big Thing, I was really out of excuses. I was trying to get every possible obligation out of the way so that I could engage in a huge project of wantonly pointless and fun knitting. So I HAD to get these things knit!

I finally handed three handknit pieces over to Allison yesterday. She has paid for them in extraordinary patience with me, on many levels. So these next three blog posts are for her, hoping I continue to learn follow-through, on just as many levels. 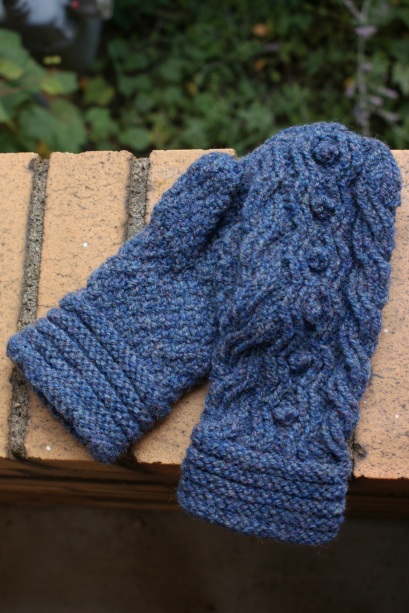 Pattern Review: Allison’s first request was mittens, and in the end she provided the excuse I’d long been looking for to knit Woodruff by Jared Flood. I’ve admired his patterns for years, have knit things with his wool, and even been knitted something that he designed. But I’d never actually executed a Jared Flood pattern myself. This was a beautiful one. The instructions are straightforward (no written directions; charts only) and elegantly simple. The pattern does seem to end rather abruptly at the top of the mitten, which is an interesting choice. It seems a little odd to me, but I don’t know how I would have done it differently.

The combination of traveling twisted stitches (a personal favorite) and a center line of bobbles (acceptable in small doses) reminded me a lot of a sweater I had designed and made for Allison long ago. Like really long ago – when I only knit with Red Heart out of some misguided principle of supposed frugality, and I designed all my own knitwear because I was intimidated by the idea of following a pattern. (The sweater ended up being too small, and thus also became my first attempt at steeking. I’m not sure she ended up wearing it much.) 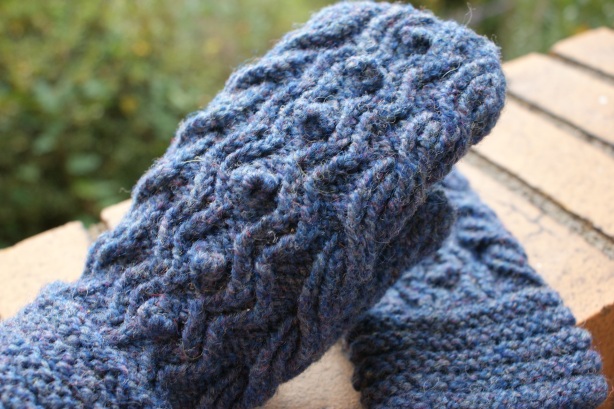 Yarn Review: Philosopher’s wool (this is the worsted weight) is a very wooly wool, if you know what I mean. Not very soft; still has bits of hay here and there; part of the feeling of warmth may actually be slightly inflamed skin. A knitter is either a fan of wooly wools, or they hate them. I love them dearly, and here is why: (1) They are usually spun at smaller mills, and often are from smaller farms, which means that more business and profit is being returned to small businesses and farms. (2) They are usually very light and airy for how warm they are. (3) They are exceedingly warm. (4) They stay put – not a lot of drape to account for, nor do they tend to sag over time as much as more smoothly-spun yarns. (5) They tend not to pill much, if at all, and as a consequence (6) they will last forever. And finally, (7) They just feel more real. Older. They enhance that feeling of connection between a knitter and her forebears in the craft from time immemorial. Since I don’t have particularly sensitive skin, a little extra scratch is more than worth that connection. 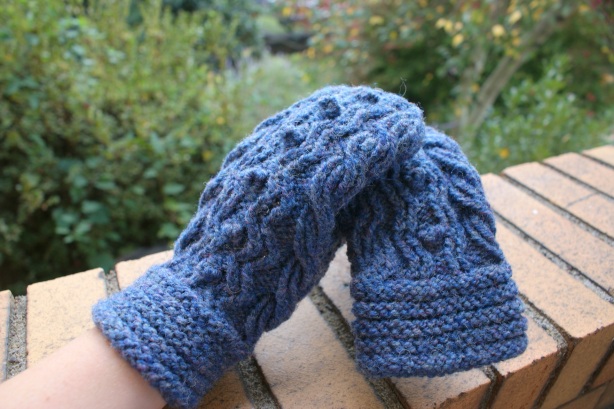 I hope these keep Allison’s hands cozy for many years. Now, to knit a pair for myself…