Southern Ontario is a beautiful mess of farms. Driving along the grid of two-lane highways, one passes sheep farms, dairy farms, and fields of corn, wheat, soy, etc. The gently undulating hills are enough to add scenic interest without taking away one iota of sky. Right across the street from Inverhuron Provincial Park, where we spent our nights, was Philosopher’s Wool: a farm and sort of wool co-op that’s been exporting quality, fairly-traded Canadian wool for decades now. 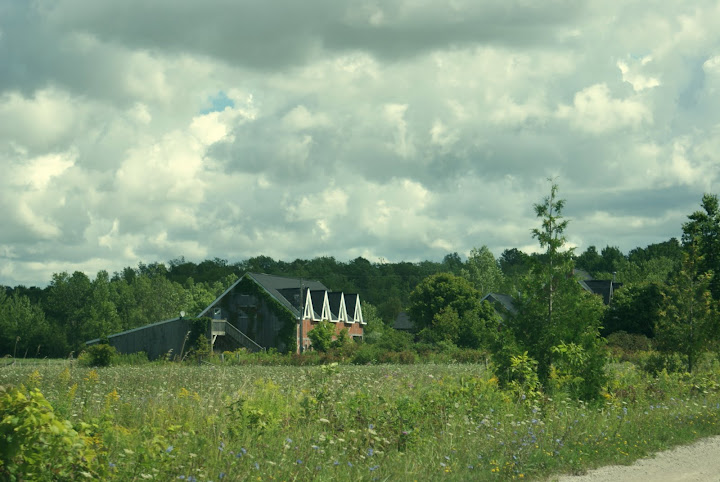 Before we found the Starmore pattern that became our epic fair isle sweater of doom, Mom and I had read Fair Isle Sweaters Simplified, and fell in love with a few. But that book also told the story of Philosopher’s Wool – how they built their farm and business from pretty much scratch, using trial and error and friends. 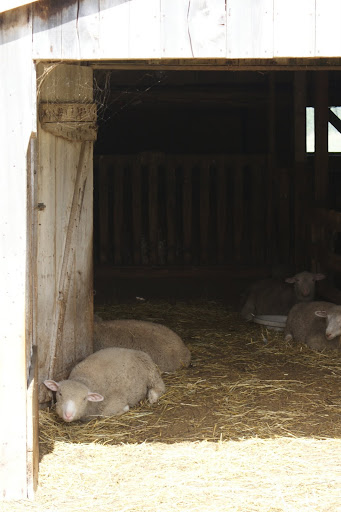 This is a neat story, and I wanted to supported them and learn more, but to be honest, I was not expecting the wool to be anything that unique. But I was floored. On the one hand, it’s “just wool” – two plies = worsted weight, three = bulky. But it’s flippin’ gorgeous. Every color is naturally heathered; it’s earthy and natural without being god-awful scratchy, and it’s solid enough that it doesn’t seem like it will pill much, though it’s definitely got lots of loft. And the colors. 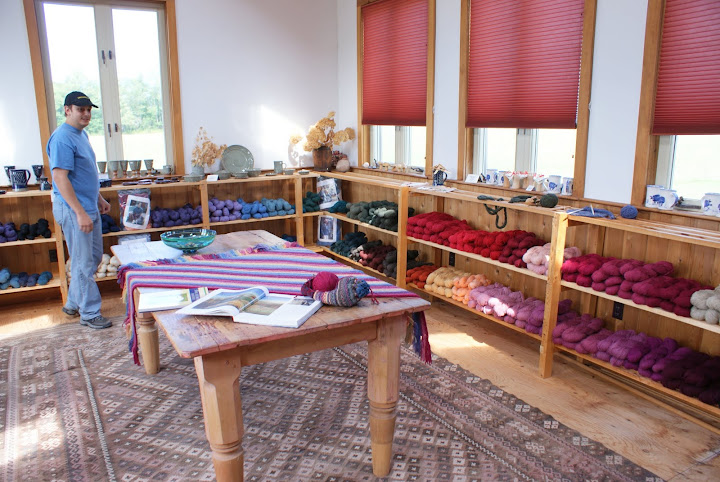 It’s like the Aristotelian form of sweater wool. I have got to come up with a way to incorporate this stuff into my next series, because it’s just classic.

True to advertising, the experience came with a philosopher. Eugene was quite open with his views, and mercifully we brought along a philosopher of our own. He and Housemate A had quite a go of it; they covered physics, consciousness, religion, and that was just what I managed to sort of follow. Despite some vehement and honest disagreement, I think they might have to be friends after the amazing happy-nerd moment they had over Leibniz. 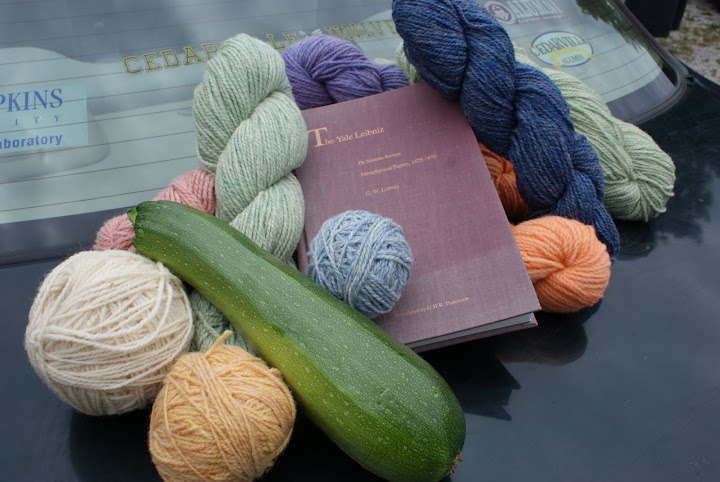 Me, Housemate A, and Collegebuddy all came away with goodies. I got all the pastels on the left; I think they’re going to become something garter-stitched and triangular when I get sick of fair isle. The squash, leftover from Mrs. Philosopher’s garden, was cooked alongside bratwurst over a campfire, and Leibniz was read of a quiet evening. (It’s a diglot with Latin. This is endlessly cheering.)

The fire underneath my farm fantasy was well and truly stoked. Now that we’re back in our town, which Housemate A calls “post-industrial blight” when she is in a bad mood, I have a new way to keep the dream alive; Stacie has sent me a copy of Made from Scratch by Jenna of Cold Antler Farm. If it sends me into raptures, I’ll have to write about it. What are you doing to keep your deepest passions on the front burner this month?