In two days, I will be, in medical terminology, “term.” That means 37 weeks, which in turn means that if Baby C comes after that point, she will not be considered premature. Those last three weeks are important for final lung and brain development, so it’s best if she goes to 39 weeks at least. Add to that that myself and my siblings were all late, and that the average first-time mom goes 10 days late when permitted to go into labor naturally, and all signs point toward me being pregnant for another 4-5 weeks. But at this point, we have our bags packed. The carseat is in the car. 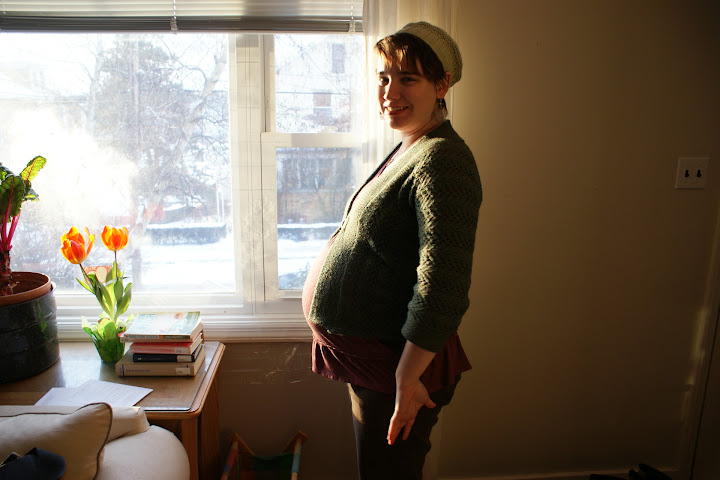 You get double for your money today, as I’ve delayed long enough in showing you the completed Hampton Sweater. If you were betting on me finishing it before we got back from Christmas break, you can cash in: here are all the pieces blocking at Mum’s house. I had it sewn up the next day and wore it to the shower she threw on January 4th; I can provide several witnesses. 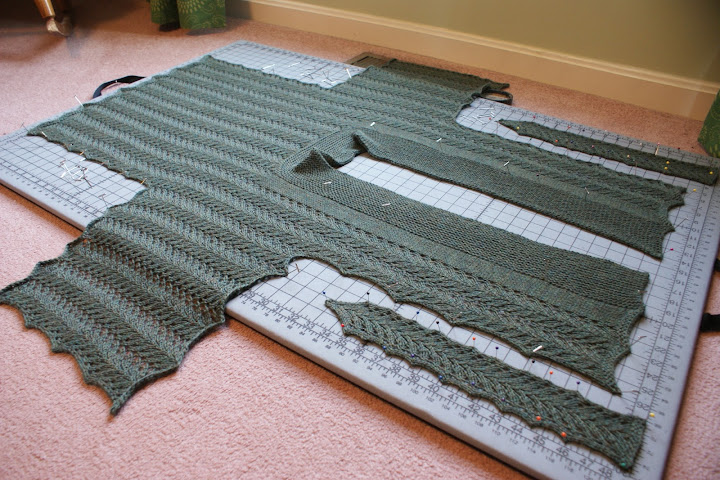 So, I may have had a small problem with gauge. Or a problem with small gauge. I don’t remember *not* checking it… but I must have not done a gauge swatch at all. The fronts and back were not nearly as wide as advertised, even with a very severe blocking, and the sleeves definitely came out 3/4 length. I made myself a couple of gussets to fix the width problem, and I’m not at all displeased with the sleeve length. But I do feel a little silly for not even checking. On the upside, the entire sweater took me less than 900 yards. 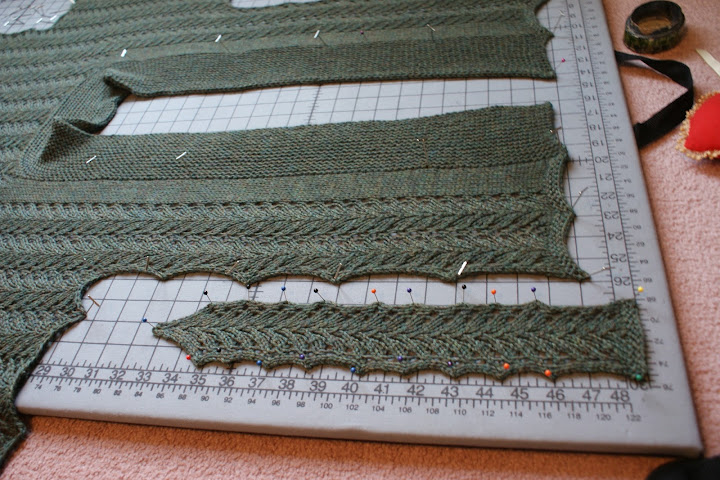 Pattern Review: this one is just lovely. It’s simple; it’s clear; it’s a fun construction. I got over the repetitiveness of gull lace fairly quickly, and we watched enough movies that I stayed sufficiently amused for Niel Postman. What more can I say? I’ve been pining for this one for ages, and I am satisfied. It’s in New England Knits: Timeless Knits with a Modern Twist by Cecily Glowik MacDonald and Melissa Barre, which is full of yummy sweaters. I always balk when pattern books put “modern” on the cover, even if it’s just in a subtitle (what they mean lexically is “contemporary,” and what they usually mean practically is “with inferior taste stunted by a predilection for novelty”), but Interweave Publishing’s taste is consistently compatible with mine. At this point I just trust them. 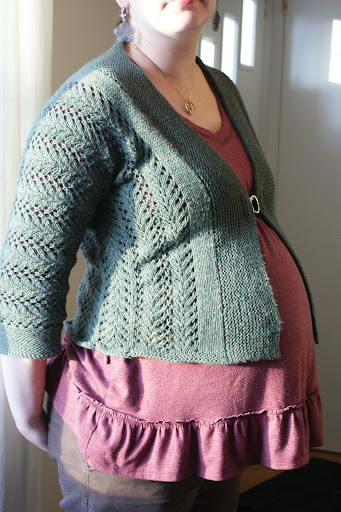 My Adjustments: The only on-purpose change I made was sneaky: I wanted to make it a little more maternity-friendly, so I made the fronts just a little bit longer than the back (maybe 1.5″). I then eased that in on the bottom half of the side seam. This provides the extra fabric for the geometry of a pregnant belly, without the obvious rouching on the side that you see in many maternity garments. And hopefully, it’s little enough of a difference that it won’t be noticeable post-pregnancy.

Additionally, I obviously made the sleeves 3/4 length, completely by accident. The whole sweater is little shorter than I usually like in a cardigan, and I should have lengthened it, but I didn’t believe Mum when she looked at the picture and said “that looks kinda cropped!” These two factors combined to make it more of a shrug, functionally speaking, but that’s fine. I found the perfect little clasp at JoAnns. 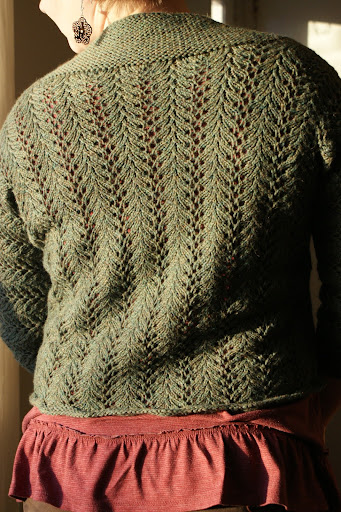 Yarn Review: You know, in all my years of knitting, this was my first time using Cascade 220. That’s like saying I’m a gourmet chef, but I’ve never gotten around to making a white sauce. I’m not sure how I managed it. But there’s a reason this has been in the top five most used yarns on Ravelry since the site’s inception: it’s perfectly serviceable in all respects. A classic yarn for sweater patterns in which you want the point to be the knitting, not an “Ooo, shaZAM!” yarn. Which is generally what I prefer in sweater yarn. I’ll let you know if it pills, but as a solid plied yarn I doubt it will. This is despite the fact that it’s certainly soft enough for all but the more sensitive necks. The color I picked ended up being a little dull for my current wardrobe, but that’s not the yarn’s fault; there are a ridiculous number of colors to choose from.

(BTW, perhaps this goes without saying, but I don’t get anything for free from yarn manufacturers, yarn distributors, yarn stores, designers, or publishers, and I’m not compensated in any way for discussing them. If that ever changes – and I wouldn’t mind if it did – I’ll let you know.) 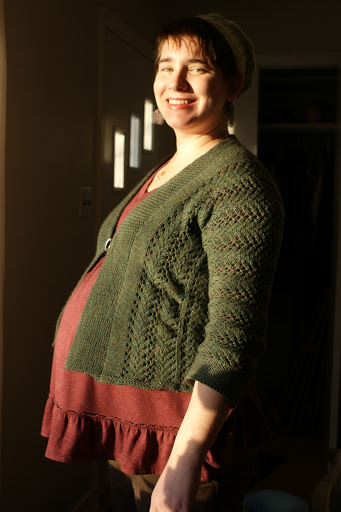 I had this long, horrible, existential post about pregnancy all drafted for you. That was before I was informed that the third trimester eventually brings back not only the tiredness from early pregnancy, but the moodiness and general emotional insanity. So I’ll spare you that. I do have this to say in conclusion though: despite the unusual number of administrative hoops I’ve had to jump through, and despite the chronic annoyances like symphisitis, being pregnant has not been so bad. But I think at the end, your body has to start making it awful, or else the switch to parenting a newborn would be so unpleasant that every mum would get depressed and give it up. I don’t have much to complain about, but I’m finally starting to feel huge, ungainly, and uncomfortable. I’m enjoying what sleep I can still get, but in a month I will be so beyond ready for this to be over.