It’s like Shark Week! But with hats… so not quite as exciting. Or at least not as much blood, or mercury-laden piscenes.

My hat plan for Sweetwater Holiday mART was very well thought out. My logic: I’m cutting my hair really short right before winter. Meaning that even if I wanted to do my hair every day, when I walk to school my head will be very cold unless I wear a hat, and if I wear a hat, my hair will be ruined. So I need hats – cute hats that I can wear all day, that can act as hairstyle replacements. Like meal replacements, but for your scalp. My plan: Knit a whole bunch of such hats and sell them at Sweetwater, and whichever ones don’t sell will keep my head warm this winter.

I had a little planning frenzy where I dug out all the single skeins of yarn I had in the stash with no foreordained purpose (plus a few more I bought for this project), and assembled them each in their own bags with their printed pattern. They were lined up at the foot of my bed. I’ll leave you with the mental image of how cute that must have been, since when I went to take a picture, our whole room was so disastrous that I thought better of it.

The next day I realized that the due date for Sweetwater was just over a week away. Meaning I had to knit an average of a hat a day if I was going to pull this off. It got a little dicey, and I didn’t get through all of them in time. But 8 is pretty good, with a couple more tacked on for good measure.

Here’s the resulting lineup, with brief reviews of the patterns. (Sorry the color balance is so weird; the CFL competing with outside light makes me look very jaundiced. And I took most of these pictures myself in rather a hurry before rushing out to drop the hats off.)

#1: The pattern that I most quickly became attached to – and the only single pattern I bought for this project – was “Modern Cloche” by Amy Loberg. I used Silky Wool from Elizabeth Lavold, using up every last teensy bit of my leftovers from the handwarmers I made. The only change I made was that instead of the bow being a tube folded into a loop, it’s just a tube kitchenered at the ends – I didn’t have enough black left to make it around the loop! The pattern was very clear, and I was enchanted by the use of knitting into stitches from rows below to make nice little ridges. I could have blocked this one a bit better, but I still think it’s adorbs. 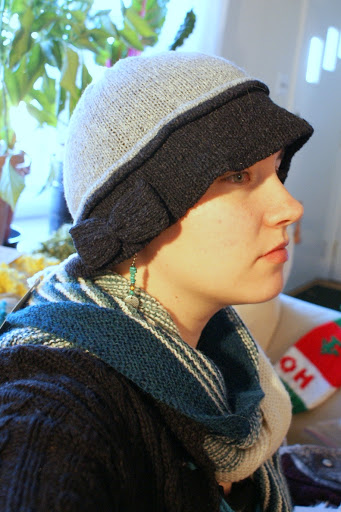 #2 & #3 are both the “Cloche Chapeau” by Jennifer Stafford, better known as the Domiknitrix. I dare you to google that. The top one is a size small, barely working on my big head, and knit out of Cascade’s Eco Duo. The bottom one is a large, which is still pretty small, made with Malabrigo Worsted in the ever-pleasant “Velvet Grapes” colorway. It’s a cute idea, well executed and quick to knit, but honestly I found the whole short-row-garter-stitch thing a little tedious. Don’t let that stop you though. It’s seriously fast. 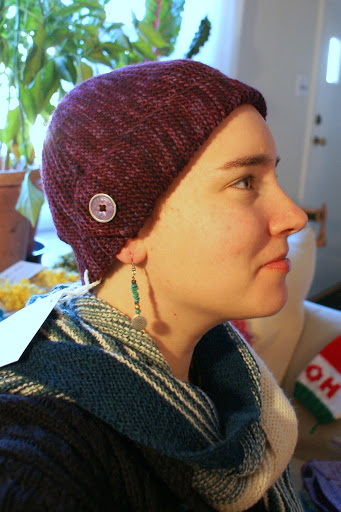 #4 is a top-down hat called “Rosasura” by Alegria DaSilva. (The little white thing is attached to a hidden tag; I forgot to take pictures before I put tags on. I’m sure you won’t sue me.) This is just fetching. And I knit it out of Jo Sharp’s Silk Tweed DK, which has more than a hint of silk and cashmere in what you think is just a plain’ old tweed sweater yarn. 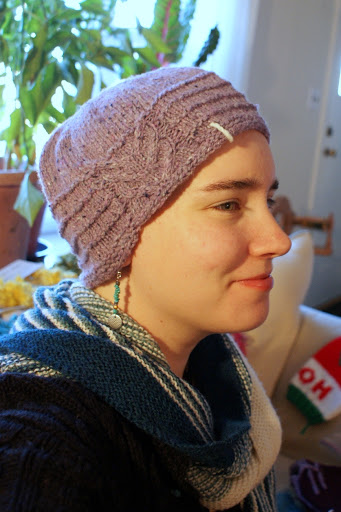 #5, “Lee” by Ysolda Teague, is the only one that really didn’t work for me. And I’m not really sure why. My gauge was large, if anything – I used Jo Sharp Silk Road Aran – so I’m stumped as to why it’s so small. it doesn’t help that I don’t have a headform to block these things on. At this point I’m hoping someone buys it as a winter sunhat for their kid. It’s a bummer, because the construction was really unique and fun.

The back, at least, is cute. 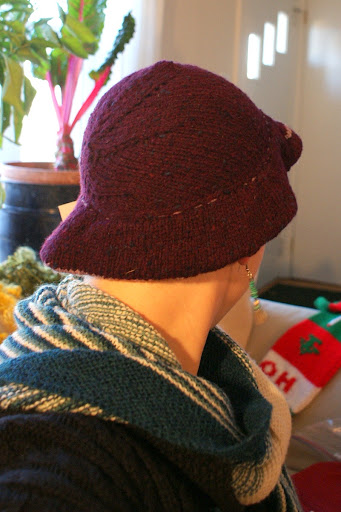 #6 is called “Quest” and is a 2-for-1 pattern by Laura Nelkin on Knitty (this is Quest #1). I knit it from a Classic Elite classic called Renaissance. I’ll be honest – I really don’t like making top-down hats. You have to get through all the tedious increases first, Which I haven’t learned to appreciate. But this one fits me really cutely. It’s the most expensive, since I both bought the yarn and bought a 6$ button (I couldn’t help myself; it was the best one!). 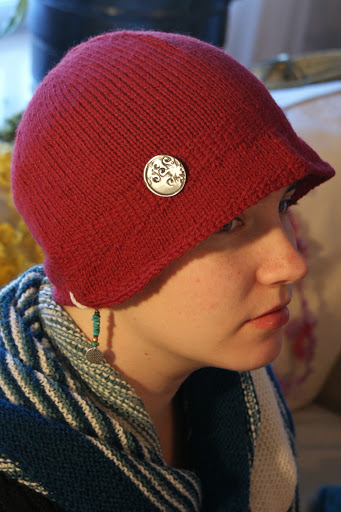 #7, “Just a Flapper” by Tina Sanders caught my attention just because of the flower;  I was underwhelmed with the hat. I like the subtle shaping that goes into the wide scalloped brim, though. Then it turns out that the crocheted flower isn’t even in the pattern; it’s a Drops pattern you can find here. I used Jo Sharp Silkroad Aran for the hat, and leftover Silkroad from Rosasura and Lee to make the flowers – it’s the smaller flower sewed down on top of the larger one.

#8 is “Jamesina” by Christine Jones. I knit it from a mysterious mohair that my in-laws brought back from New Zealand, and the gauge was definitely too big, but not too big to function as a hat. This pattern is pretty; I’m still not sure how I feel about the rosebud brim, but the crown decreases are perfectly designed. Mega props to Ms. Jones for that. 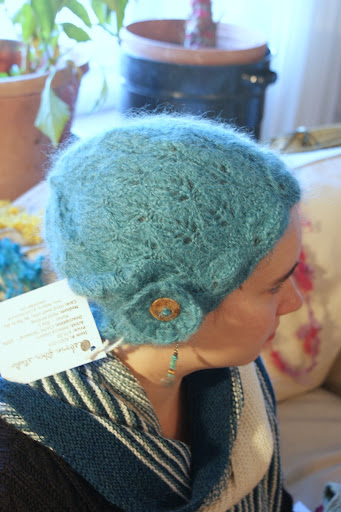 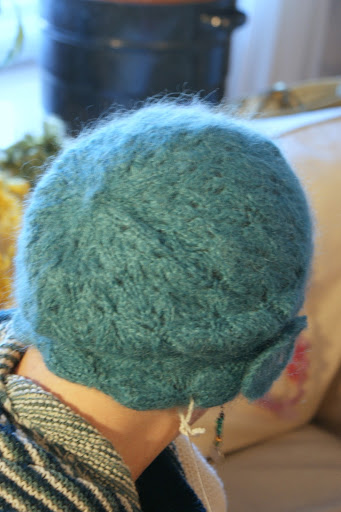 Not too shabby for 9 days’ work.

I didn’t quite finish #9 and #10 in time for the official deadline, but I dropped them off late. They’re both “Lucy” from the latest issue of Knitscene, knit out of our own Kirby Meritime. This one (Sprout Sage and Mystic Mauve) is a small, and is nearly too small to work on my big head. The other (Mystic Mauve and Naked Apple) is a large that I made a little too long. Neither issue is enough to keep me from wearing these in public if they survive the sale, though. 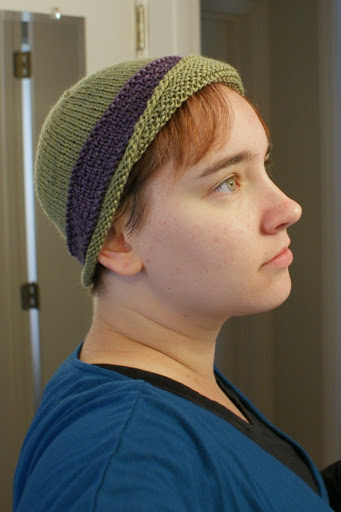 We’ll see in a week or two what is left after this cloche attack. After all these short projects I’m starting to crave a sweater. Hmmm…

One thought on “Hat Week!”