So while we’re on the subject of ridiculous yarns, let’s get even weirder. 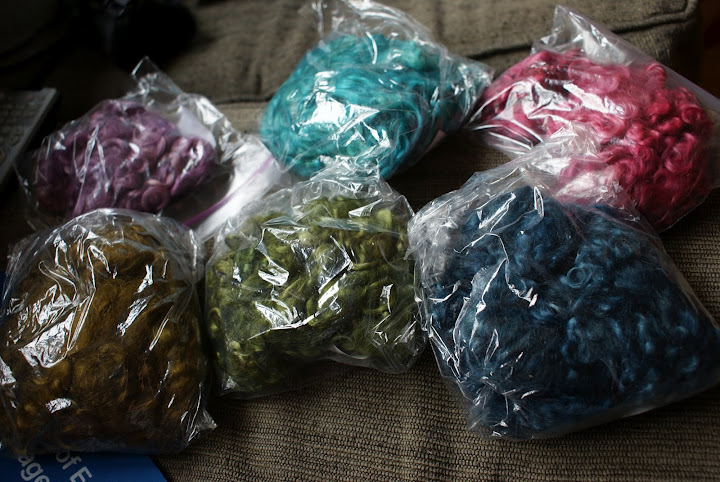 I received these bags of hand-dyed locks as a destash gift from the incomparably lovely B.W., and every now and then I would run into them and wonder what to do with them. One could always just card and spin them up normally, but these locks are special, and resist such plebian treatment.

Why are these locks special? I know nothing but what I’ve seen browsing the fairs, but some breeds (I know at least Lincoln and Cotswald) grow their wool in a unique lock structure that holds together into thick strands. I’ve seen demonstrations how to just knit with locks, though to be honest, it looks a little ridiculous. But lately I’ve had a lot of exposure to Jazz Turtle, who seems to be the master of a technique called “tailspinning.” The idea of this technique is that the base of a lock is, well, locked, onto a core yarn, with the rest of it left hanging.

I could have read a book on the subject, or I could at least have taken ten minutes and found a couple you tube videos on how to do it. But you know how it is when you get in a rush of projects… a couple of pictures in Spin Control and I felt enough of an expert to give it a whack. 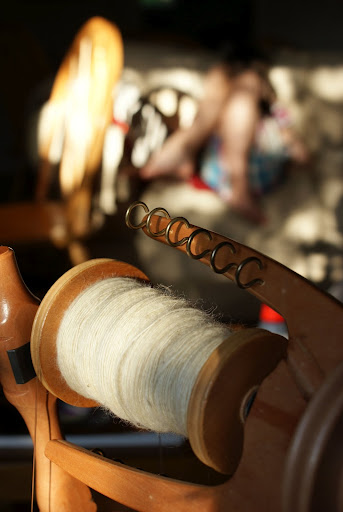 The first step was to spin  up some singles – way too much, of course, but white singles always come in handy. This is more dorset from Aunt K, who gave me a few pounds of it when Doris first came into my life.

Next, I prepped some locks, to make the flow of spinning them a little easier. You can see how most of them have a very clearly defined tip and a fluffy, indistinct base. 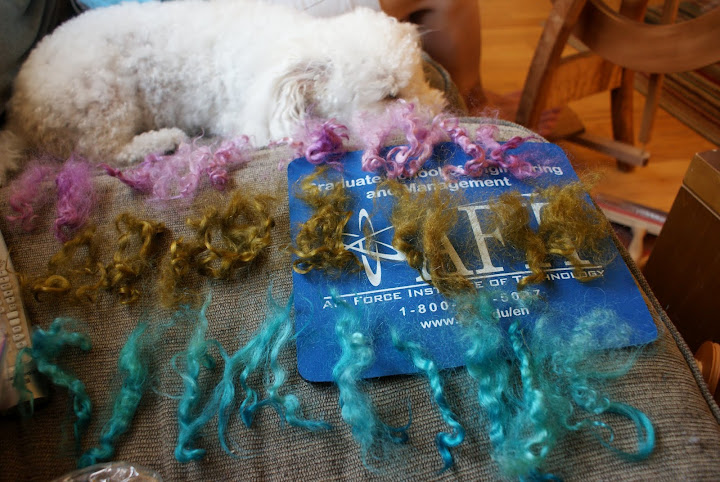 To get the locks attached to the yarn, the basic idea is to trap them between two plies. I placed them every 8″ or so. 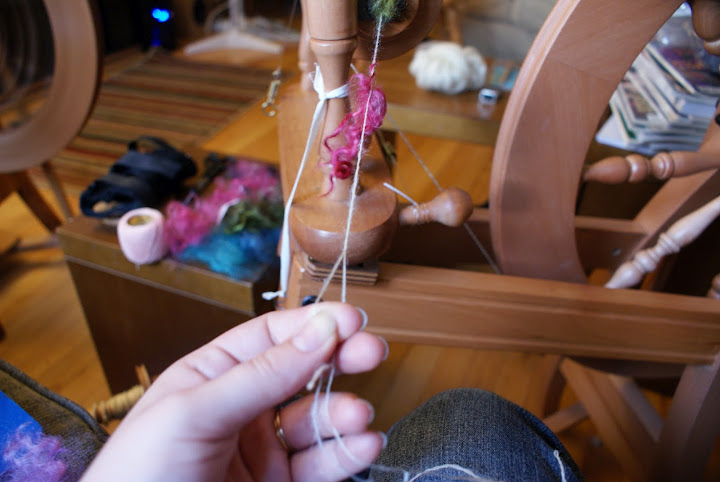 After dividing the plies. I placed a lock between them, and let a few more twists go into the plies. 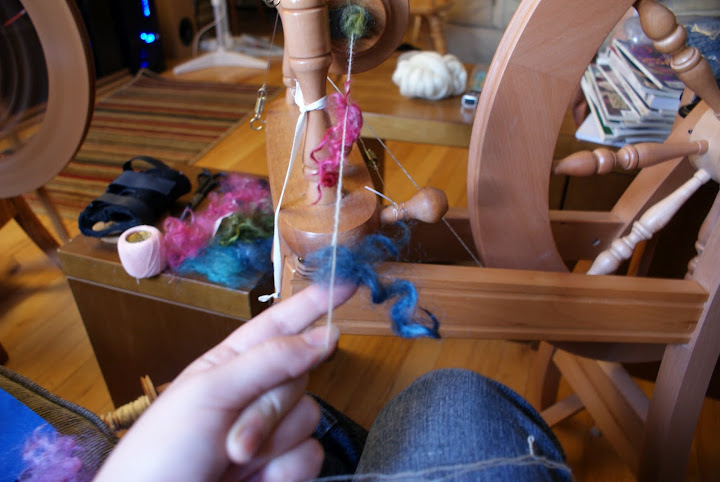 But I couldn’t just let it stay like this, because the locks will just pull out. So next, I split the plies again, forcing the twist to scrunch up close to where the lock was positioned, and dragged the lock through again. That, ehem, locked it on place. 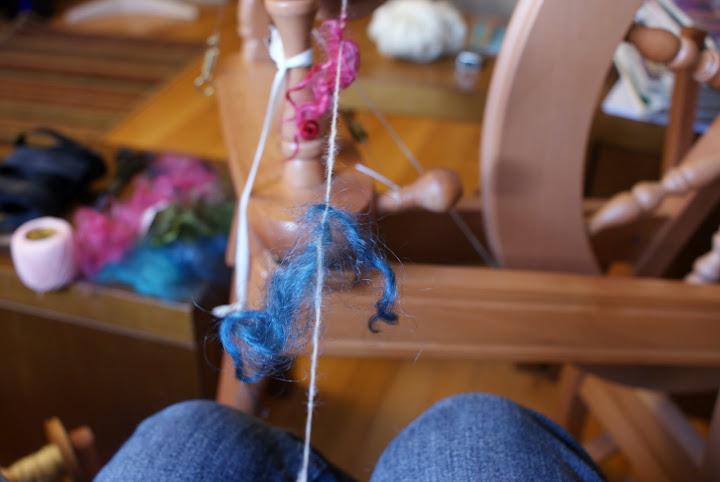 There’s no denying, both on the bobbin and off, this is easily the most ridiculous looking yarn I’ve ever made. 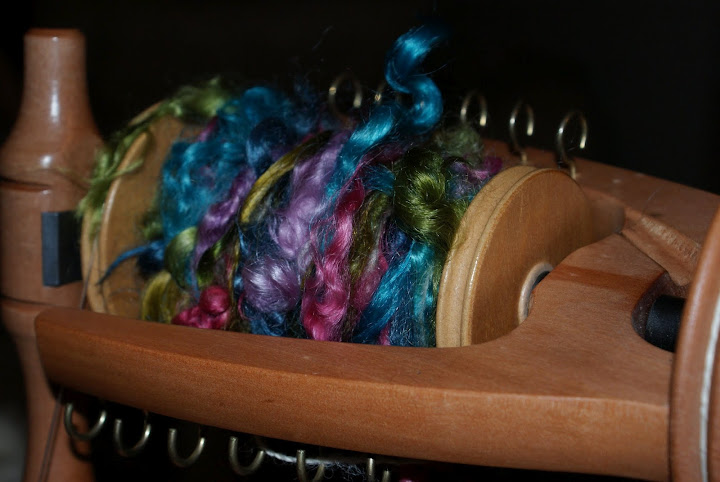 I should probably have admitted to myself before I started that all the colors I was given don’t quite go together.

Mom learned from my trial attempt, and drew a few colors from her own extensive collection of lincoln locks to complement some fuscia singles she spun up. She picked smaller bits of lock, positioned them closer to each other, and instead of just attaching the base, she centered the lock across the plies. The shorter, fuzzier yarn she made looks a little less like traditional tailspin, but looks a lot less like the barf of a deranged, wool-obsessed clown. 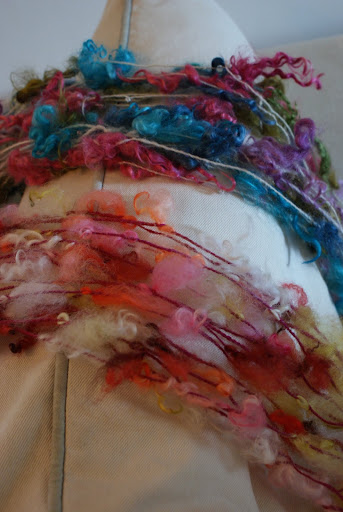 Again, my equipment got in the way; this is going on the list of things I won’t try again without a bulky flyer. But I also have a huge amount of respect for what Esther at Jazz Turtle does, and I have a lot of reading and experimenting to do if I ever want to do this again. But quirkiness is still the point of this technique, and I have no doubt that my tailspun will make some exceedingly quirky boot toppers.