From the sublime to the ridiculous, my silk hankie thread was next followed by my first-ever intentional novelty yarn. Core spun yarn, that is; specifically core spun singles.

The singles in question were 1.6 oz. of “fine wool,” a takeaway from 2011’s spin in. And, I thought, very nearly Kirby colored. 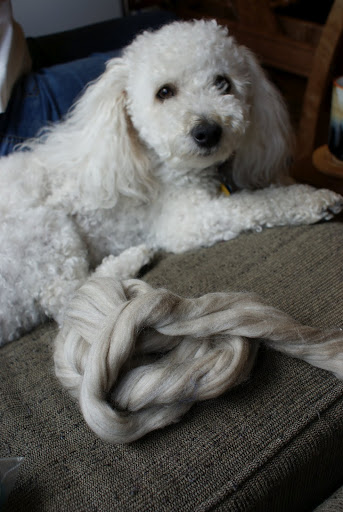 I wish to picture this fiber also with our bible for the weekend: Spin Control by Amy King. This book is perfect for the spinner just budding out of the beginner category, answering most basic-to-intermediate questions with clarity, conciseness, and excellent pictures. It ends with a short chapter on novelty yarn. Entire books have been written on spinning novelty yarn, but this is just that for me – a novelty – and I don’t know that it will stick. Definitely a one-chapter level of commitment. But I would commend this book to anyone; I was particularly converted by her chapter on sampling.

Also, we moved outside. The weather was perfect for a little porch spinning!

But I digress. This Kirby-Colored “fine wool” was true to its name; it was whipped up into some gorgeously imprecise Kirby-colored singles in about half an hour. Why don’t I spin for sweaters out of fiber like this? Oh yeah, because it’s prohibitively expensive and would pill like the dickens, probably even in a 2-ply. But it’s so nummy. 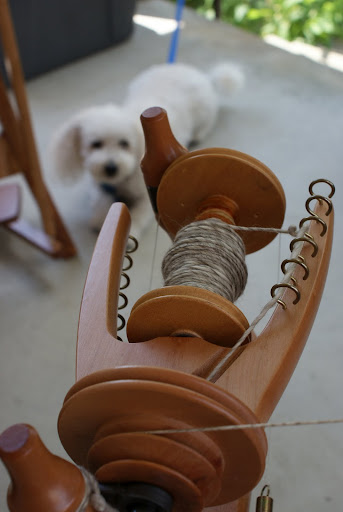 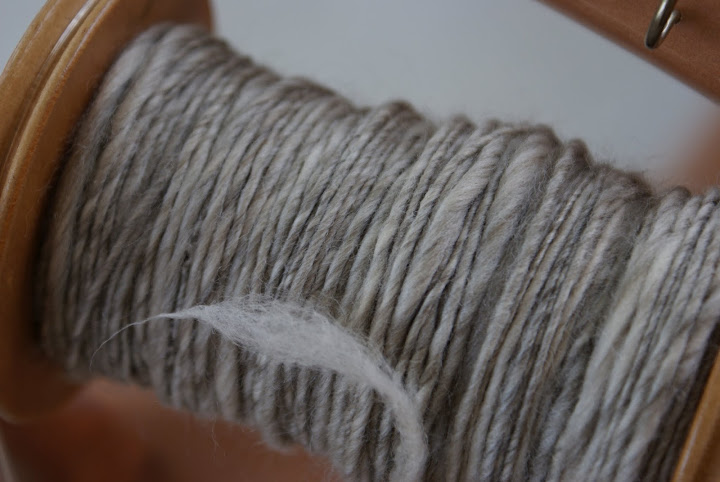 Step the next: dig through the stash to find a core. This little ball of crochet cotton has quite the story. My dear in-laws, on one of their international adventures, actually called us from Scotland to see if there was anything we would like for a souvenir. My first wool-related association with that country was, at the time, Shetland lace. Could they possibly maybe find some Shetland lace? Not that I knew where it is produced or where they could find it, nor that I had yet discovered that Shetland lace is more a historical phenomenon than a current one. They did manage to find some kind of yarn-etc.-selling store, although the sales girl had no idea what they were talking about. She thought maybe I meant this. 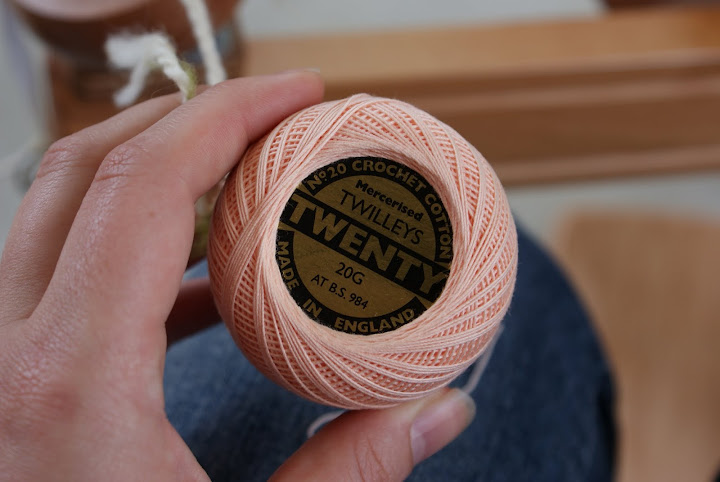 I have long treasured this little ball for their efforts, imagining the day that I would be overwhelmed with the desire to crochet tiny pineapples. Mercifully, the day came a little sooner that I was told by Ms. King that crochet cotton makes an excellent core for core-spun yarns. 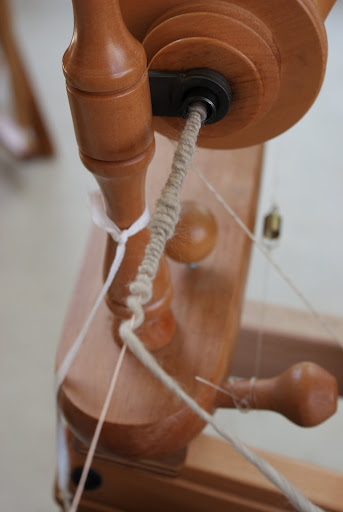 What is core spinning, you ask? The basic idea is that you have some very durable core, and you hold it so it’s coming directly out of the wheel’s oriface. (That is absolutely a technical term, and I can almost say it in mixed company with a straight face.) The wrap, which might be existing yarn, or just fiber, or locks, or whatever, is held perpendicular to the core and wrapped around it by the twist going into the core.

In the case of a singles core spun yarn, the singles just wrap themselves around the core with nary a care. I had to push them up to bunch them into beautiful coils, and I found it helpful if I occasionally pulled on the wrapping yarn. In its eagerness to be wrapped around the core, it sometimes jumped on too loosely, making slubs out of looseness instead of out of irregularities in the yarn. I wanted the slubs, but I also wanted the yarn to be at least kinda stable.

Easy peasy, right? Well, yes, if you have the right tools. 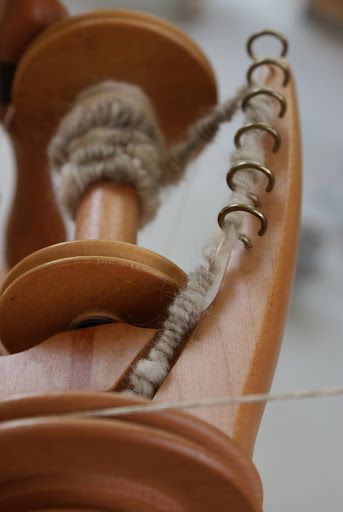 See the coil stretched out just before it reaches the first hook? My flier isn’t really meant for bulky yarn, let alone novelty yarn. So with this, and with all the novelty yarns I spun this weekend, my delight was marred by the fiber getting continually stuck in the oriface. (yes, yes.) Not to mention it getting stuck on the hooks, which happily turned every which way and made a mess of things. I had to wind the yarn onto the bobbin by manually turning the bobbin in relation to the flier, and the final yarn isn’t as even in its wrappiness as I had hoped.

But you gotta admit, it looks pretty flippin’ cool. The variation in the fiber between light and dark enhances the shading effect of the coils, making them pop even more. 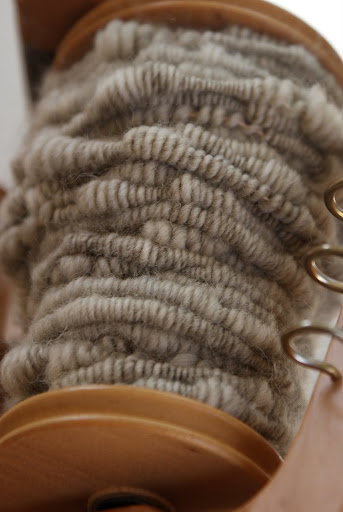 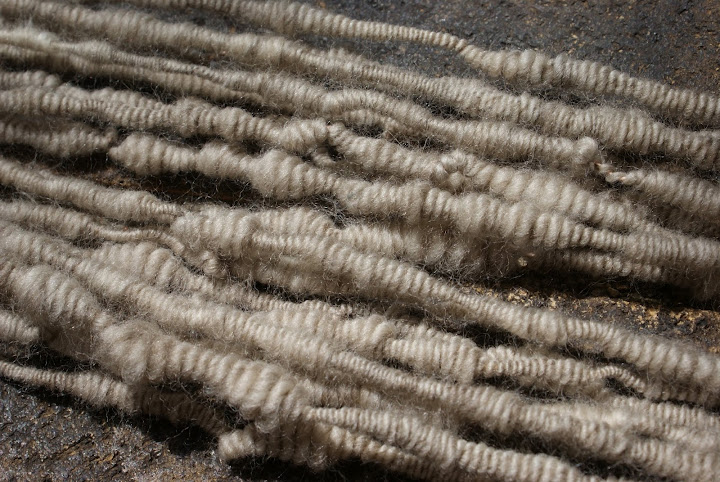 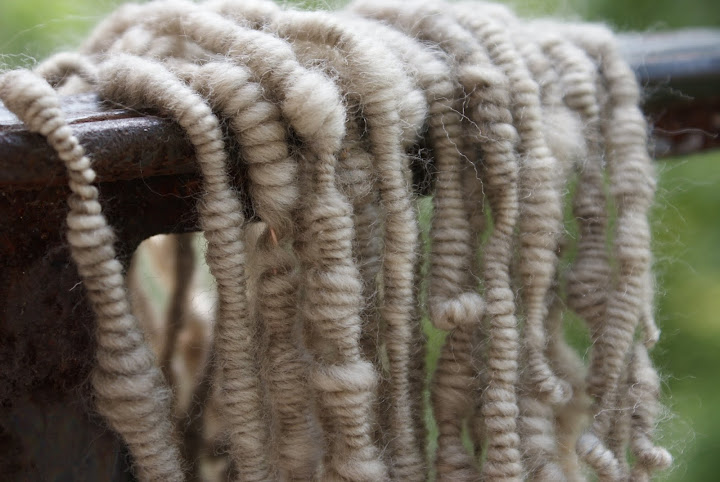 It looks even better now that I’ve blocked it; it’s quite energized in these pictures. I can’t imagine knitting with it; I’ll probably just wear it as a cold-weather necklace next time I have a snazzy evening engagement. I promise I’ll wear it with a more appropriate outfit than below. And I’ll probably comb my hair. 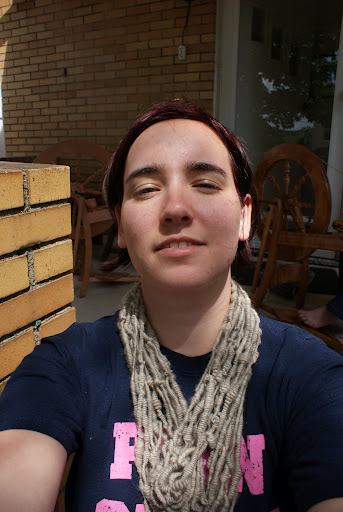