What happened to this month? It seems like a week ago that I was dressed up for Halloween and shocking everyone with my new haircut, and here it is about to be December. Like Tomorrow!

I did in fact knit November socks: “Merike’s Socks” from Nancy Bush’s Folk Socks. Only laziness prevented me from showing them to you before today, but they would have bee difficult to catch in progress. They were knit like the flipping wind. 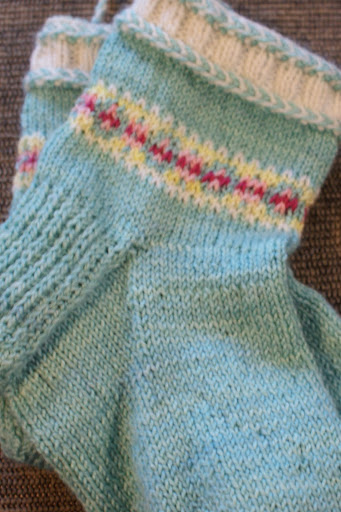 Pattern review: The main change I made was casting on only 64 stitches, because I’ve learned my lesson about this book and gauge. I love the braids framing the ribbing, and I love the little peerie pattern at the ankle; it was totally worth finding four colors to go with the pastel teal I picked. (I think it’s my grandmother’s favorite color; if not, she’s not the sort of woman who will lie to make you feel better. I will have to work on accepting this before Christmas day.) I added a K1, Sl 1 pattern to the heel, because I didn’t feel like reinforcing it afterwards. I misplaced the book when I needed to do the toe, so I just did a typical wedge toe.

Seriously, it’s hard to say anything bad about socks that knit up this fast, even on US1s. I think I did the second one in about 6 hours. Turns out that when you knit ankle socks for a person who wears a size six shoe, this saves a lot of time.

Yarn review: This was my first time actually using Koigu, despite owning six skeins of it. KPM is the semi-solid version, and it’s quite nice. Fairly conventional, though. I’m not sure why it has to be so expensive ($13 or so for 175 yards), though of course it’s quite pretty. There was a bit of nailbiting toward the end, but I got both socks out of one skein with only a few yards to spare. 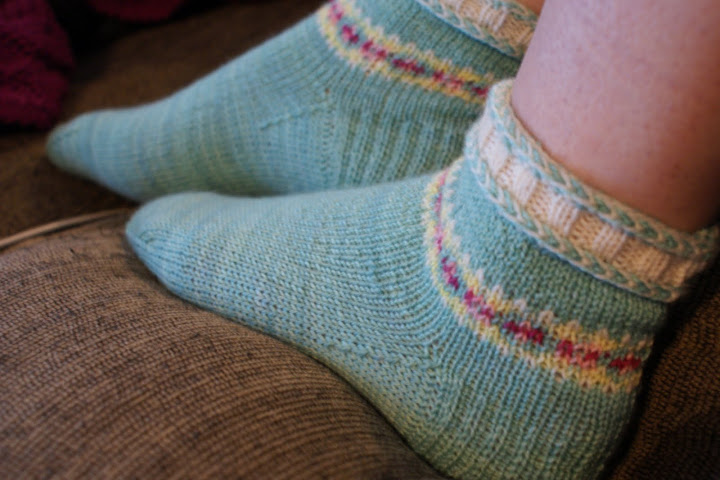 December’s socks will be the last pair! I am in a bit of denial. Also, I am denial that I’ve committed to knit socks for fun during a month that I’m up to my eyeballs in Christmas knitting. But then again, I never claimed to be sane.