August’s Socks, “St. Peter’s Port Stripes,” were completed with a day to spare, despite mounting indifference starting halfway down the second leg. Seeing them next to their blue inspiration, though, I know it was all worth it. 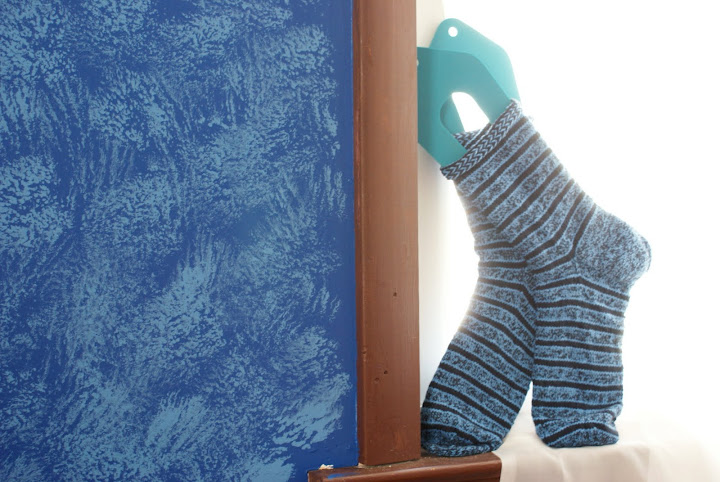 Pattern Review: This was my first time doing Latvian braids, which was a treat. Other than that, this is a very typical plain sock pattern. The only major difference, aside from an excess of stripes, was the heel: a weird one that involves four lines of decreases and a graft. I’ve decided I don’t like it, as it makes it difficult to pick up enough stitches. After the first sock barely fit on Jared’s first, I told myself I would try making the second foot a little bigger. But three decrease rounds into the foot, I’d already decreased to the same number as the other foot! So oh well. I guess I changed the pattern by doing the whole thing on a 64 st. circumference instead of like 80 or whatever the pattern called for, but that made little difference. 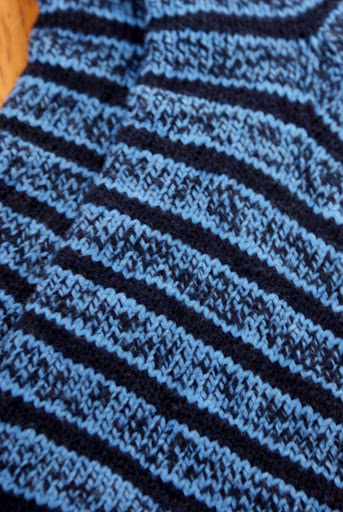 Yarn review: “Mississippi 3” by Katia is not a yarn I’ve ever seen outside of the weird little shop “So Original” in Olney, MD. The shop is run by a brusque Russian lady, and the store feels very economical, almost industrial – perhaps hearkening back to the days when knitting was normal and practical rather than a chic hobby. But this is one of the funky yarns she had that is nowhere near any of the current trends, but suited my needs. The 60 cotton/40 acrylic blend was soft, if not very yeilding; it hurt my wrists a little but didn’t make me hate it (which is saying something for cotton). And the experience of unplying half of each color and replying them together to make the custom marled yarn was just. too. cool. The final fabric, to which the photo above does no justice, makes me very proud. 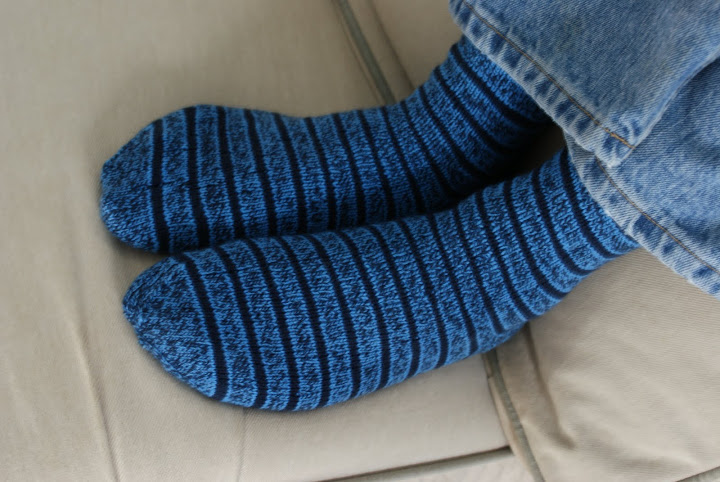 Next time I make socks for my husband, I will make the foot wider, the heel longer, and the leg skinnier (though probably ribbed, to get them over those feet). One of the cool things about knitted socks is that, being fairly modular, they are easy to completely customize to a person’s unique foot shape. I learned, from this project, that I do not know my husband’s feet as well as I thought. I considered re-knitting them completely so they would be a better fit, but I had to move on with my life, so I called them finished. I felt a little bad, but ripping and re-knitting them would probably make me imbue the socks with so much imprecation that wearing them would give my husband toenail cancer. Besides, I had a made-up, voluntary deadline to meet. 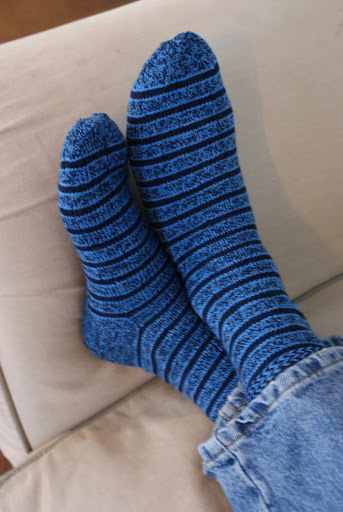 You can imagine my pleasure, then, when after after the socks got a (non-stretched) blocking, Jared was able to pull them onto his feet with very little fuss. I don’t have to waste any guilt on small socks. If the feet are a little tight, they’ll just help his circulation.

One thought on “Strides in Stripes”