I have had farming thick on the brain this week. I’ve been thinking generally about farms for ages, but the topic has taken up residence on the front burner. It started with my reading of the Cold Antler Farm and Oliver and Abraham’s blogs, which has become quasi-religious. It continued with the first actual significant harvest from our back yard garden: 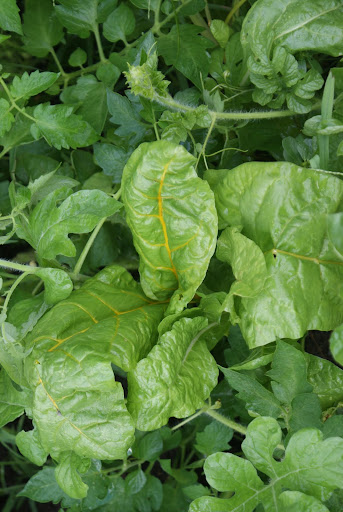 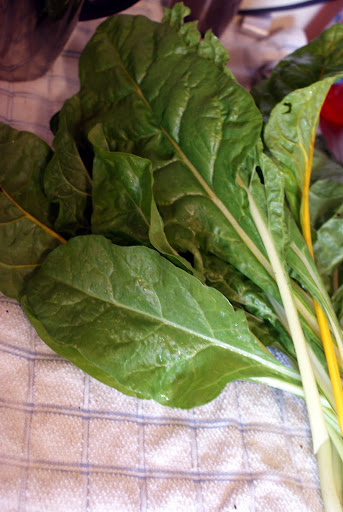 The rainbow chard had to be excavated from under the leaning tower of tomatoes, but there was plenty for a wee side dish. I always cook chard with this recipe from Mollie Katzen’s adorable book, The Vegetables I Can’t Live Without. I bought the book, but this is still almost the only recipe I make from it.

Then, this past weekend, we went to MD and stayed at my parents’ house. You’d never notice this about your childhood home unless you spent a long time away from it, but I’ve been out of the house for as long as I lived there, so it’s apparently been long enough. This time, being at my parents house was like staying in an art gallery.

Inside is art, outside is land that has been worked toward beauty for years. I was nine when my parents started building their house, and I’ve watched them slave over bits of it, piece by piece becoming what they want it to be, something always in process.

With farming on the brain, it was with a jolt that I realized that growing up at my parents’ house was the closest I have come to date to living on a farm. I mean, a farm it is not, but just having land that you have to tend and deal with is a big deal. Between leaving for college and our latest residence, I never had to take care of anything green by virtue of where I lived. This is the first time I have had any real responsibility for a space that is outside the drywalled box I call “home” for the moment. Heck, I’ve never had real reason before to even look at my home from the outside. 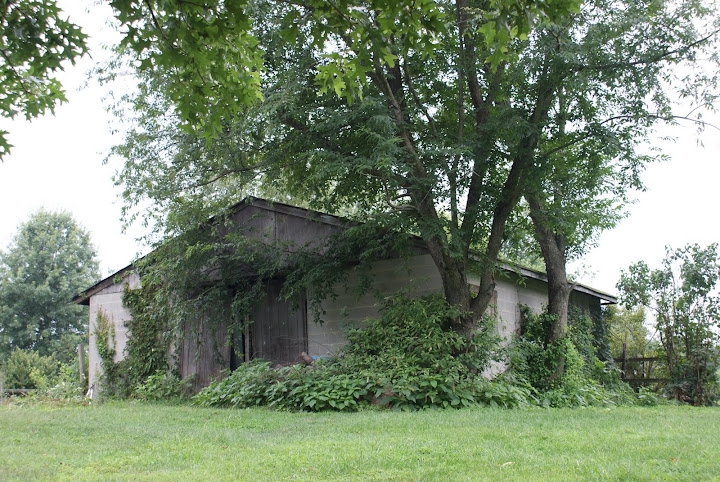 My perspective on the home of my youth has been significantly shifted by this change. For example, I had a serious conversation with my grandma about the control of weeds, the usefulness of pokeberry plants, which trees to remove and which to trim, and the balance of Virginia Creeper required to hide an ugly barn without taking it over on the inside. Granted, most of this stuff is cosmetic, and might seem to the writers of the aforementioned blogs like laughable concerns compared to their own. But goodness me, it’s a step. 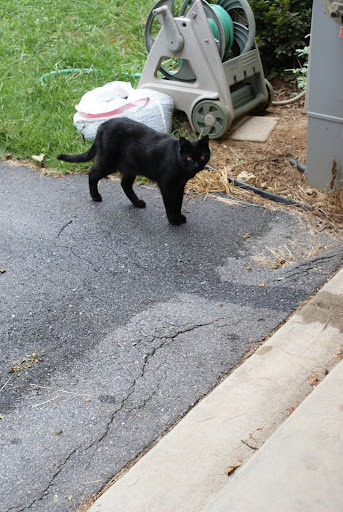 The most poignant moment of my weekend happened one morning, when I was wandering around with my camera. The sky was overcast and it was damp and warm from rain and dew, the Patomac basin fully in the embrace of its fickle rainy season. Oscar, the semi-crazy outdoor cat, ran up with something in its mouth and stowed it on the island. I came over for a closer look. It was about the size of a full-grown mouse, but it was clearly a baby something, having hardly any fur and closed eyes in its cramped fetal position. It might have been a baby mole or opossum, something we definitely do not need more of in the yard. But… it kept squeaking while Oscar tormented it. So loud and insistent and pitiful, even as it could do nothing, surely injured beyond rescue, even if its mother would take it back.

In the moment, I just couldn’t deal with it. I told myself, this is life! This is what happens. Oscar’s a cat; cats kill mice; predators are good. Just that morning, I had read Jenna’s account from Cold Antler Farm of burying her lamb after death from an acute illness. If I have any hope of working with animals, I need to be able to deal with things like this, things a heck of a lot more significant than this. I told Dad, and he came out with the shovel to put the thing out of its misery, but Oscar had ran off with it already.

There are lots of reasons for me to get fixated on the farming idea, most of them reasonable and great, but not all of them super-sane. I don’t know that we’ll be called to farm with any large portion of our vocation. But one reason I hope we are, is that I’ve been exposed rather drastically in the past year or so with the fragility of life. Working with animals seems like it would normalize that fragility, make me come face to face with it enough to accept it. As much as that would be very difficult, it might also be healing. Maybe nothing will make death and suffering seem less jarring and wrong, but you can’t blame a girl for trying.

We’ll see. For now, I’m pleased as punch to get back to PA and see the first of our squash finally making an appearance.

One thought on “Leisure Arts”