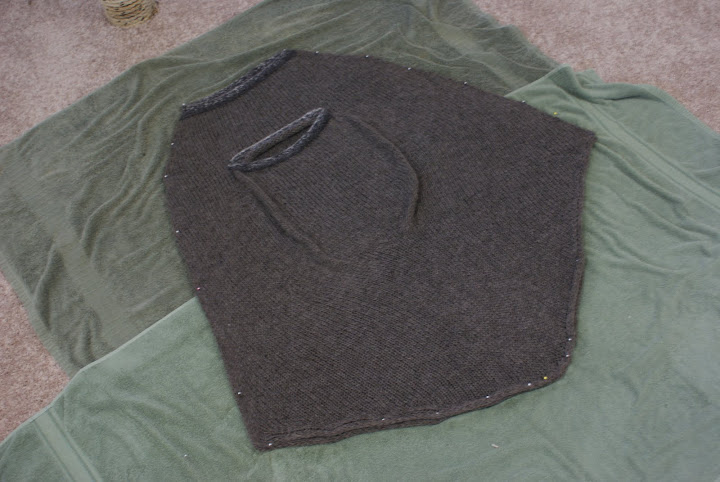 Yarn Review: Cascade’s “Eco Wool” is an economical bulky weight wool that comes in many natural shades and lots of bright colors. It’s pretty straight forward wool, but it’s spun very fluffily, so I’m surprised at how soft it was. Still, I’m glad I used Cascade’s “Eco Duo” for the collar, because this stuff is super soft even on baby necks. It’s a bit hairy, but that’s alpaca for you. And I didn’t know this when I bought it, but it stripes! I did my best to use this to my advantage, putting a darker stripe near the body.

Pattern review: the “Babywearer” Pattern from Little Turtle Knits is not winning any awards for me. As an indie designer myself, I expect patterns to be a little better proofread, and nowhere near this expensive. The bit about the shoulder length was very badly written (or I’m just a moron), resulting in me having to knit most of the thing twice. However, this is the only pattern of its kind that I could find, and it includes a multitude of sizes and weights. I would only recommend you buy this if you are very comfortable using your own intuition about knitting top-down things. As a piece, it was fun to knit (even twice), since it went very fast (I would not knit one in smaller than a bulky weight unless I had to pick one project to take with me to Gilligan’s Island).

Details on the changes, if you want to make it:

That said, I love the product. And it was a great learning experience. When it applies, I will have to make myself one. But this one will be winging its way to Michelle as soon as I get it into the post. Thanks for letting me do this, Michelle, and being such an awesome earthy-momma role model! 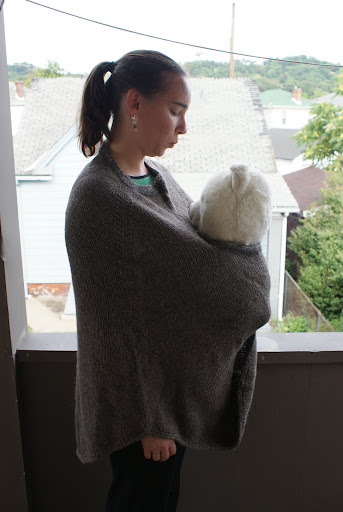 Thanks to Bells the Bear for helping me model. I know Bells is a slightly awkward name. What can I say; I was young, and at the time, he had a “brother” named Jingle.