I am so close I can smell it.

I have been doggedly chipping away at the final clue of the “In Dreams” shawl, but as you might imagine, when I got to the beading rows, everything slowed to a crawl. To describe: the shawl is shaped like a semi-circle, starting in the center of the straight edge and working out. So now, near the end, my rows trace the entire outside curved edge. And at the last gasp, each of the 20 little pattern repeats starts to fill with beads, until on the last right side row I had to insert 201 beads. One at a time, crochet hook method. We could talk about the over 600 stitches I now have to bind off, but I’d rather not, if it’s all the same to you.

As the last ten rows or so progressed, I could tell my yarn situation was getting dicey. The little ball of handspun lace shrank and shrank, until finally, just into the last row: 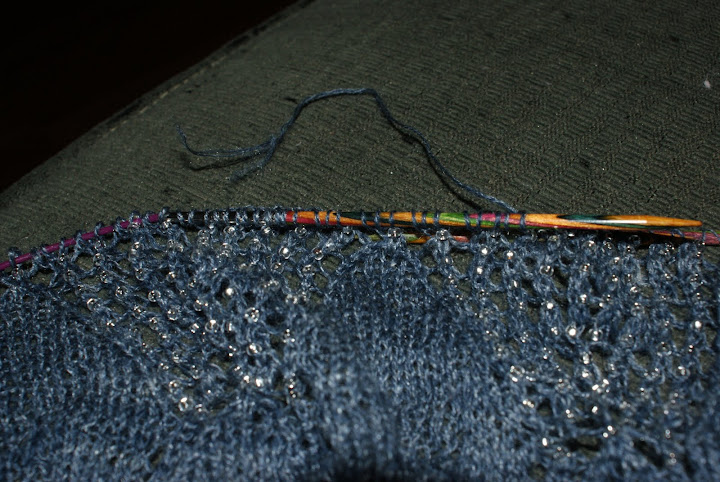 This should be the cue for a well-justified round of tragic, devastated complaining. But this is one little advantage of handspun – if you have more roving, you can make more. I had it even easier than that – Somehow I’d kept track of the ball of leftover singles, which I plied from both ends on my drop spindle, right on top of what was already there. 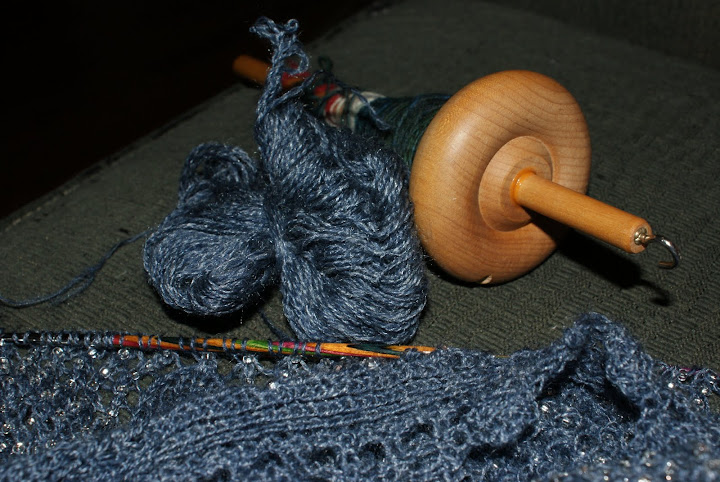 The resulting bit of rescue yarn is horribly unbalanced – the yarn was underspun to begin with, and I imagine the singles have lost some of their energy in the year since they were spun. Add to that the fact that my insomniac self way over-plied them, and it’s a bit of a mess. But I’m not going to block the yarn before I knit with it. Because for goodness sake, for one row and a bind off it should not throw off the bias much. Maybe it will even add some fetching curl to the edge.

Am I going to stay up and finish this tonight? Most likely. For no other reason than, in the words of Charlie Brown, “I CAN’T STAND IT.”