Appearances can be deceiving. 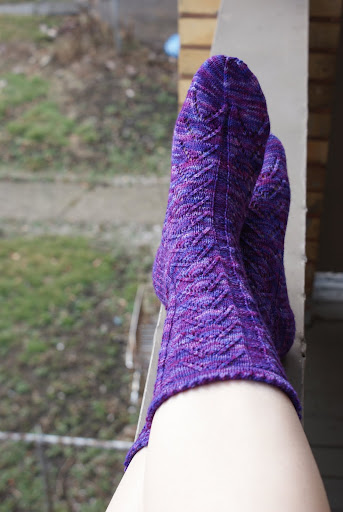 Jared told me once that humans are extraordinarily bad at estimating relative volume. You know this if you’ve ever had to dirty three tupperwares because you wrongly estimated the size you would need for your half-pan of pasta sauce. It turns out this is also true of body parts.

When I polished these socks off on Tuesday, then finished the ends yesterday morning, I still thought they were going to be small-ish. But as you see, my moderate-sized feet got into February’s socks without much trouble. They’re a little snug lengthwise, but that’s as it should be to keep them on. And the legs are about average length, despite appearing long. Oh well… I’m going to have to actually measure if I want to make socks for a smaller-footed person. What a thought. 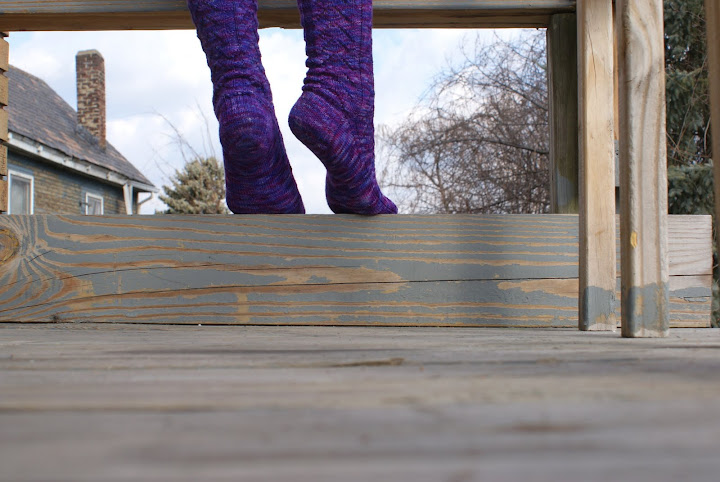 Yarn review: “Merisock Hand Painted” by Punta yarns is a rare find. I picked mine up at Seaport Yarn in Manhattan (at least I think it was that one… it was a year ago and we visited a LOT of shops). It’s generous in yardage and very unusual in construction – tiny merino plies coiled around what seems to be a small elastic core. Somehow, this makes it almost like knitting with microfiber, which I can’t figure out! So soft, though. And it’s on the finer side – US 1.5’s were just small enough.

Remember what I said before about short color repeats? These are tiny, making for a great blended effect. This particular skein woo-ed me with it shades of purple from fuscia to indigo to everything in between. 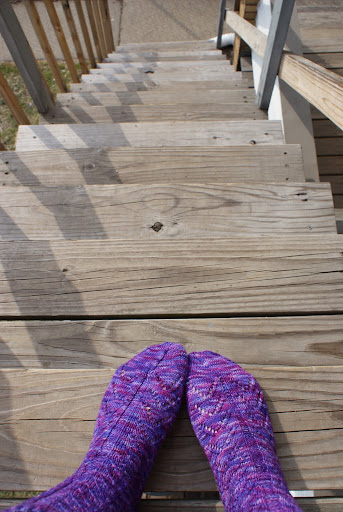 Pattern review: “Latvian Stockings” from Nancy Bush’s Folk Socks is simple, elegant, and well-executed. The only change I made was to switch the direction of the round toe on the second sock so the two would be symmetrical. One oughtn’t always be seeking for new thrills and novelty in sock knitting – after all, it is a traditional craft, and socks are essentially mundane. There is nothing wrong with that, and if every pair was new and edgy and fantastical we’d rather miss the point. So I respect these socks for their simple, elegant, feminine beauty. 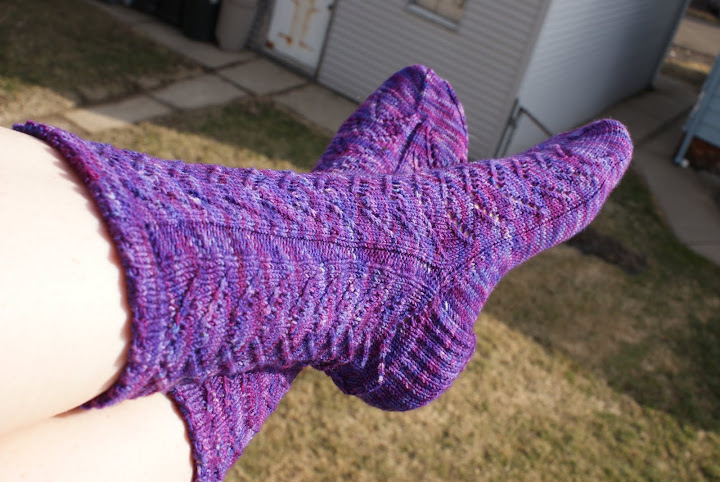 With this pair, I’ve made it halfway through Folk Socks: 9 out of 18 patterns completed. I’ve already pushed through the “wall” of being sick of socks – that happened during the first leg of the kilt hose (if I can finish those 50-inch monsters I can slog through anything). I’m on track to finish the book by the end of this year, by which time I should have a respectable pile of footwear to share with my friends and family.

It seems fitting to stop and reflect after a relatively plain pair. These sock patterns, adapted from historic socks from around the world and across time, are all very similar. Some are more fancy and complex and demanding, while others put me to sleep, but they are all socks – meant to be hidden in boots or shoes or sandals, knit by some industrious soul who knew all too well how quickly they would wear out. They all start at the cuff, are knit to the ankle, are fiddled around the heel, decreased into a foot, and zipped into a toe, and that’s how most socks have been made since they were invented. This is what sock knitters are participating in – the thoroughly normal yet secretly spectacular sock. This paradox seems to be what keeps us fascinated.

One thought on “Ordinary Loveliness”