In my second video, I explored spinning a striped top with different drafting techniques and 2-ply plying arrangements in order to achieve different color affects. I was only able to flash the yarn up at the time, and talk about it a little, but I promised a more in-depth analysis of the yarn to come. I knit the samples up into a swatch-scarf (swarf?) over vacation, and I’m finally ready to share my analysis! Get ready to get down into the weeds with me, folks. I hope you like gettin’ nerdy with me.

I won’t go over the details of the singles again here; if you’d like your memory refreshed, please check out the video. But for the sake of reference, here are the four types of singles I made, with brief notes:

A. All Colors: whole top was predrafted together; spun short forward draft. I wasn’t exactly spinning all the colours together at all times, but pretty close.
B. Across the Top: attempted to spin across the top with short forward draft; found that I was generally taking from one side of the top (green-blue-red) or the other (purple-orange-red) and so had alternating sections of these colors combo-drafted.
C. Stripped: divided the top into equal sections lengthwise, then stripped each section into four, spinning each set of four in the same order. This made for very consistent color repeats of only 2-3 colors drafting together.
D. Over the Fold: Tore off short sections of the whole top and spun them over the fold, drafting off the end of my finger. This made woolen singles, much airier and longer yardage for the same weight, and interestingly, most isolated the colors from one another.

I plied three different ways: traditional 2-ply, center-pull ball, and plied A against each of the other colors.

Sample #1: All Colors against Itself

This first sample served as a sort of “control” for the experiment. Pre-drafting the top meant that I was drafting as many colors as possible at any one time. With the many hues in this top, blending them together as much as possible would make as much mud as possible. This is not as blended as it would be if I had, say, carded it together, but the optical blending is pretty thorough. This way we can also see the overall tone of the blend, which is a greyish purple-red. 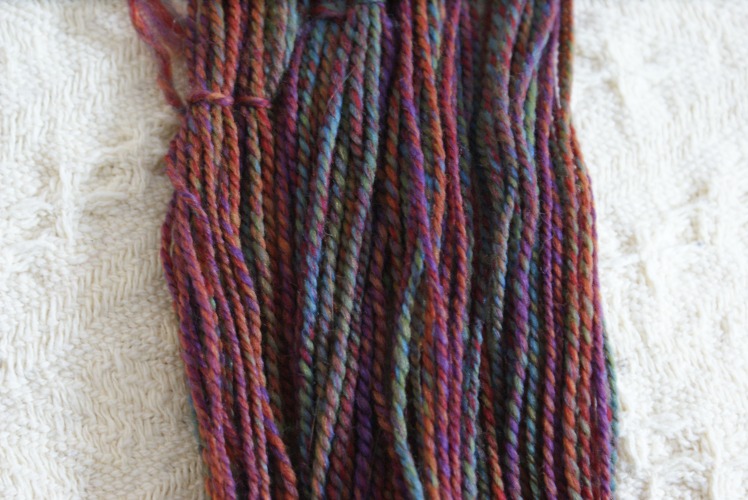 This was the sample I was most excited about. Since the drafting method made for very consistent stripes in the singles, and I plied them together starting at the same point in the color repeat, the colors matched up beautifully. There’s still a ton of complexity in the yarn, due to the fact that I was still drafting at least two colors at any one time, and the colors did not line up absolutely exactly. Who knows how this would work on a larger project, as the consistency in color repeats would drift eventually. But if there were a way to keep it exact, that would rock, because this is a really neat self-striping yarn!

This is the exact same single, but plied out of a center-pull ball. What a dramatic difference. There are still stripes, but they are much shorter and more subtle, because the same colours that were lined up in the last sample are folded in half against each other in this sample. It’s interesting to me that the blues and greens really popped out more in this one than in the other samples, while the red receded a little bit.

Sample #4: Stripped against All Colors 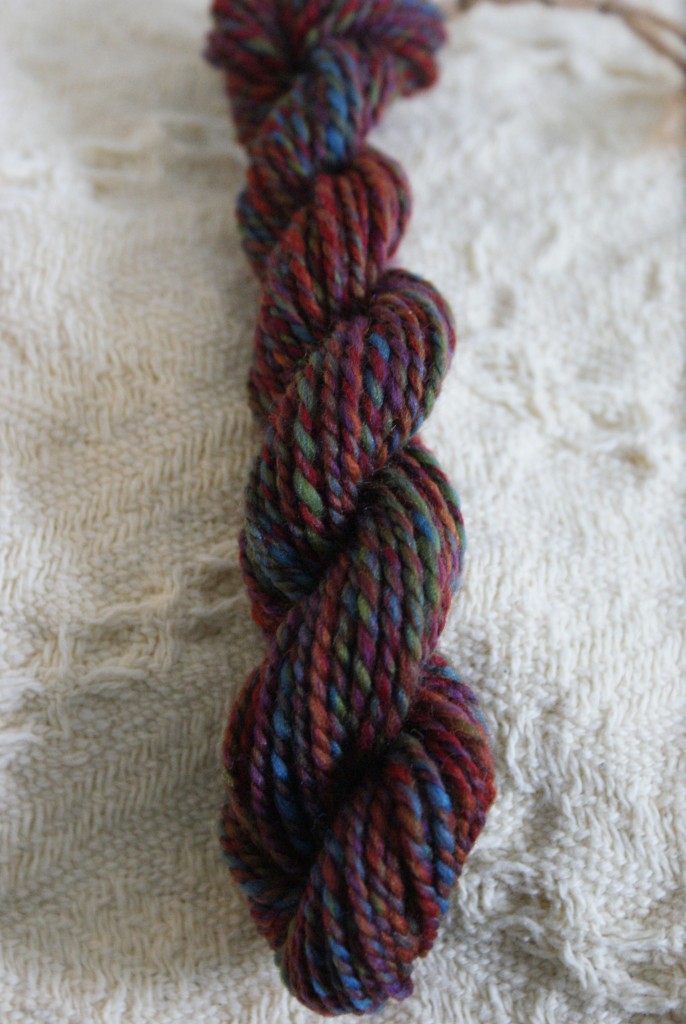 The stripes in this sample are the same length as in the traditional-2ply, but much more subdued, since the second ply was the purple-grey All Colors. I appreciate the subtlety of this effect, and the overall purple tone comes through. Note also that because the variation is only in one ply, this would be very easy to replicate in a larger project, because I wouldn’t have to worry about lining them up!

Sample #5: Over the Fold in Traditional 2-ply

As mentioned above, spinning over the fold did the best job of isolating the colors – meaning I often was spinning only one color at a time. Thus, you see that the colors pop most of all in these samples. However, not much of a pattern comes through, because the colors were quite short and inconsistent. I could not be very consistent in the lengths I was pulling off to spin over my finger, and I did not really try. What I got out of the plying, then, was a bunch of bright barber poling. I love it in the skein, and find I’m ambivalent about it knit up.

Sample #6: Over the Fold in Center-Pull Ball

Since the colour repeats were inconsistent in the singles, the center-pull ball yarn is nearly indistinguishable from the traditional 2-ply. I did always spin from the same edge of the top, so the colours are in the same order, if not the same length. That means the colours in the center-pull ball sample are a little more scrambled than in the traditional 2-ply. But the difference is so slight I wouldn’t even look for it outside this experiment.
(Interestingly, you can see the dramatic yardage difference as well. I measured the exact same length of top for each type of drafting, but the samples made from this woollen-style spinning are much longer. It’s the same exact quantity of wool, and the same thickness, just with more air.)

Sample #7: Over the Fold against All Colors

This sample preserves the short pops of colour, but with much less barber poling, and a subler tone. I find it more pleasant than the previous two, and again very purple. For maximum subtlety, compare to #10 below – you can see stronger variagations in this than in #10.

Sample #8: Across the Top in Traditional 2-ply 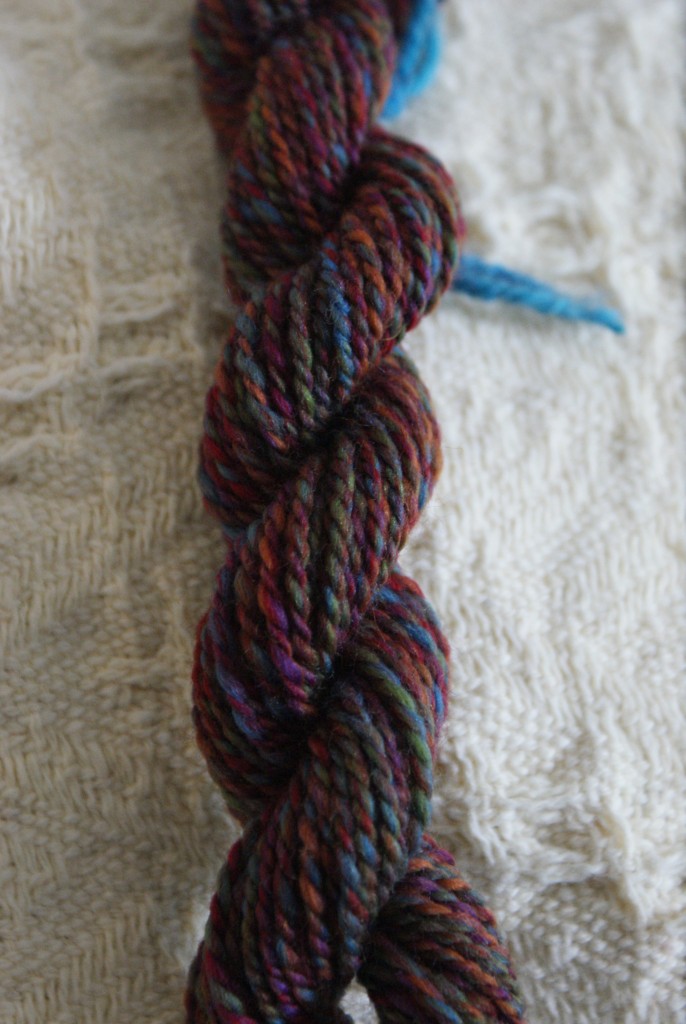 Spinning this across the top was an exercise in frustration, because I’m inexperienced in the technique, and because the top was too narrow to see much distinction. The colours I drafted together were inconsistent and unpredictable. This means that most of what I see in these samples is mud, albeit less blended mud than sample #1.

Sample #9: Across the Top in Center-Pull Ball

Again, since the colour changes were of inconsistent length, there was no obvious difference between these. Even more so since going back and forth across the top makes for palindromic colour changes, so direction is irrelevant. The colours lined up more in this sample, giving a few pops of blue, but I’m pretty sure that’s a mathematical coincidence.

Sample #10: Across the Top against All Colors 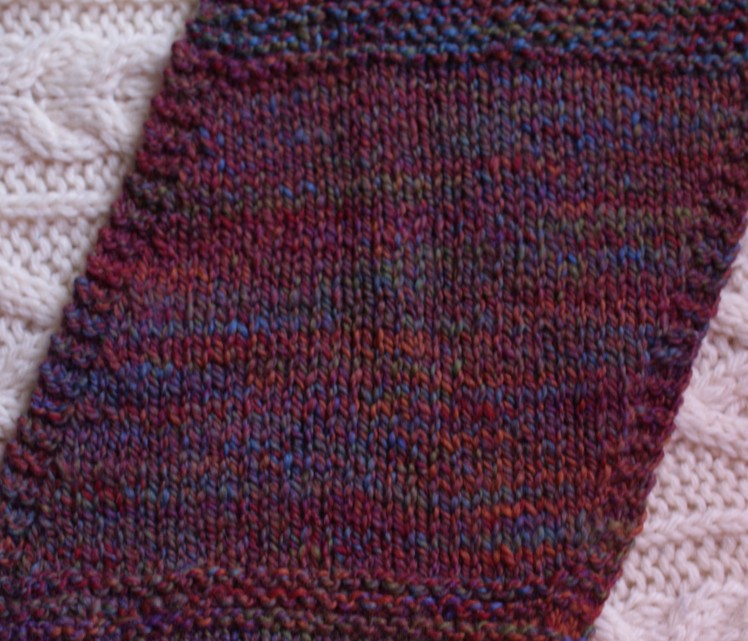 This final sample hardly differs from the other two, as both singles were really quite muddy. Some gentle emphases come through, because when a colour was occasionally strong in the Across the Top single, it was reinforced by its presence in the other single. This reinforcement of pop colours means that the yarn almost never looks barber piled. There’s not enough contrast. It’s got a little more visual ebb and flow than sample #1, and is definitely less uniformly purple.

When I started this project, I thought this kind of top very unusual. But I’m seeing it turn up in different places, mostly in wider tops custom blended for sellers like hipstrings, woolgatherings, and regenbollenwolle, to name a few. (Please name others in the comments; I still haven’t found the name of this wools source.) The colours are usually more blended in those tops and less boldly distinct. But I hope for those who enjoy such tops, that this shows some of the variety available for the colour conneseur.

I would love to repeat this experiment on a wider top with brighter colours. The dark value made some of the differences harder to see.

When it comes down to finished objects – and I am shamelessly product-oriented, you know – what spinning really offers is the chance to design a completely unique fabric. I found it very rewarding to discover how much subtle control I could have over the look just by playing with a few variables!