I tried to be penitential, but my efforts to induce reflective suffering were repeatedly thwarted. The things we gave up – too much phone, TV for the kids – were a relief to be rid of. Putting them down didn’t feel much like a burden, and that space was filled with joy. I even tried to be more penitential with our food, switching breakfast and lunch to something more boring, and sticking to simple, vegetarian, bean-based meals for dinner. But that intentionality accidentally reactivated my cooking mojo, so we were just eating tasty, fun, filling simple dinners.

All that changed a couple of weeks ago, in the buildup to the Big Work Thing’s Biggest Thing. That’s a sort of retreat called the Alpha weekend, part of the Alpha course.

A big part of being a priest, functionally, is event planning. If I had known that, I probably would have eschewed ministry life entirely, because me and event planning don’t go together well. I felt inspired and called to lead this Alpha, and that’s been widely encouraged, confirmed, affirmed, and supported, but I knew it would be hard for me. I have a ton of prayer support, and awesome leaders and teams to work with, but sometimes it is hard. Especially in the last week and a half. It came out in my Lenten disciplines – rather, at my total failure to keep them.

One of the hardest things about it, although it was also the best, was that God kept sticking his hand into it. Every single week of Alpha, something major has looked like it was not going to work out. But, at the last minute, it kept working out. Either someone would step in and surprise me, or someone I thought would surely say no would say yes, or someone would decide to be more generous than I had any right to expect. I sent a lot of long emails to my prayer team (and am still sending them, because we have a few weeks left).

God keeps coming through, and in ways that make it clear he is invested in this project. What this is teaching me is that I need to honor him and give him the glory for it. That’s what I asked him to do, after all: make it happen if he wants to use it to glorify himself. Why am I surprised that that’s what he did? I think that’s the main reason he keeps waiting for the last-minute save – I don’t think it’s coincidence, and I don’t think he’s doing it just to mess with my head. I think he’s doing it because it says, in a way we can’t ignore, yo, I’m here! This is my kingdom you’re working on, and I’m gonna build it!

A key moment for me actually came in association with this yarn I’m showing you. I’ve been using spinning as a way to get my mind off the pressures, to relax and even pray when my brain won’t shut down. I’ve been passionate enough about the spinning that it’s been an effective escape. This yarn in particular was a joy to sample and test and decide exactly what to shoot for. I really enjoyed spinning the singles, as the sampling had helped me refine not only my target yarn, but how to relax into the process of making it. 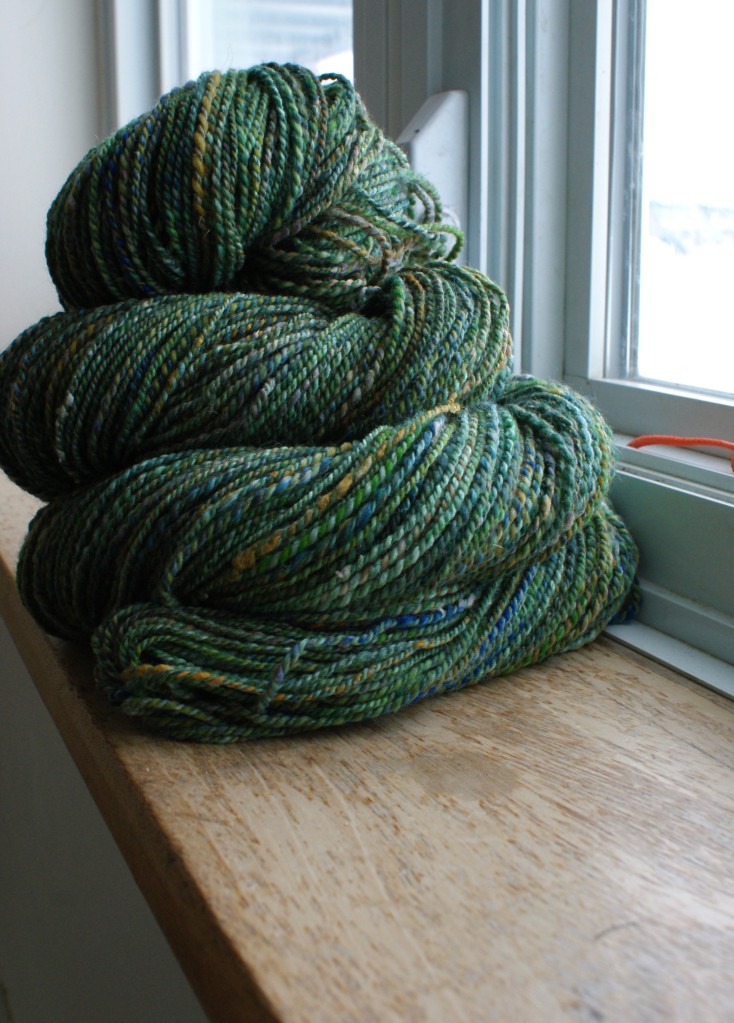 I was really looking forward to plying this yarn. I love plying; it’s that moment when everything comes together for the first time. It’s the final yarn being born, really, and it’s not a terribly long labor.

When the time came to ply, though, there were only a few days left before the Alpha Weekend. Things were getting sorted, but it took until the day before it started for me to even have confidence that all the pieces would be in place at all. Then there’s always the question of how it will go, and if anyone will show up. I was determined to be present, not to run away from the anxiety, but that meant that spinning was not an effective escape. I enjoyed the plying, but it didn’t delight me. I was distracted. The creation of yarn, though a gift of beauty from a creator God and a good thing, was not going to rescue me. The power of the Holy Spirit and the prayers of my friends carried me through, not my coping mechanisms. This might surprise you, but that actually lets me feel much more free to enjoy my coping mechanisms, because it was finally proven to my subconscious that yarn can’t really compete with the power of real relationships. That’s a bit of obviousness I’ve been struggling to internalize, so I’m glad it happened. 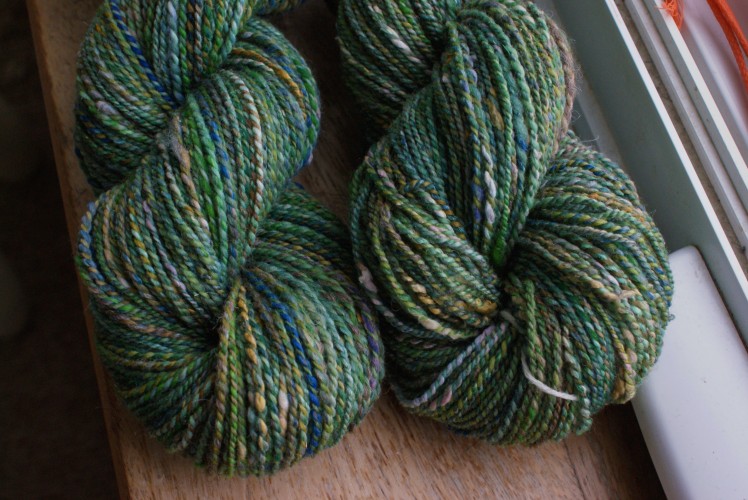 The weekend itself went very well. I won’t go into details, but a great number of prayers were answered, and the guidance myself and others had been receiving from God were confirmed. When the event actually started, I was able to be present and calm.

And best of all, the way God had been making his investment in the project felt – by his annoyingly last-minute semi-miraculous contributions – meant that I was completely confident that he would do exactly what he wanted to do in it. The success of an event like this isn’t in the number of people who show up, but in what the Holy Spirit does inside each person, and that can’t be measured, certainly not by me. 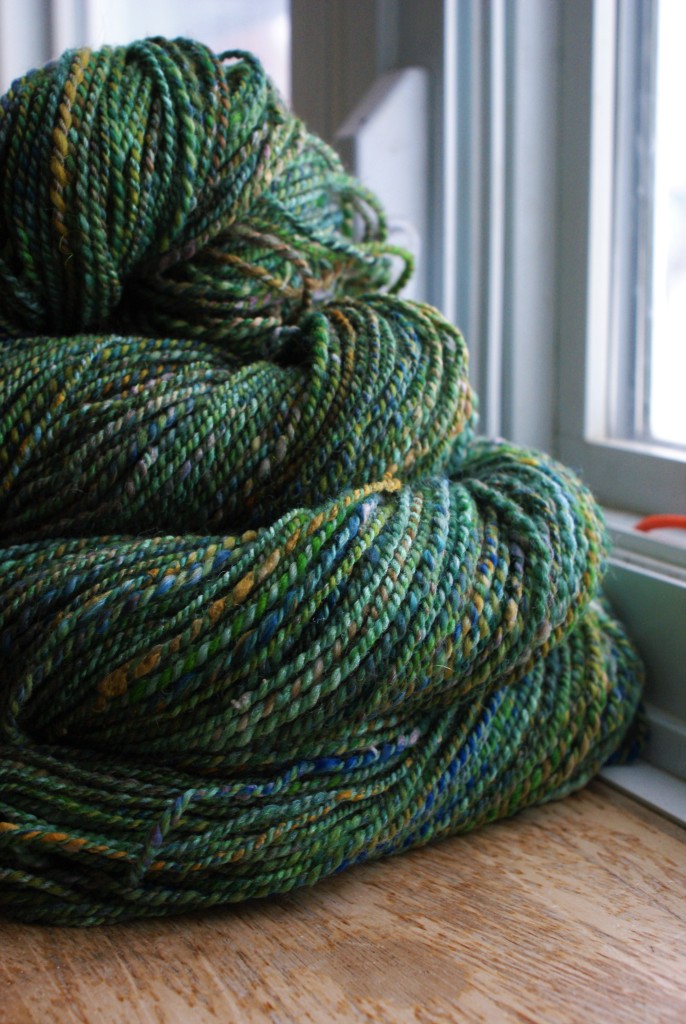 I like dragons. I know they’re usually bad guys, both in the Bible and in Tolkein, but I can’t help it. I used to have a little necklace with a dragon on it, and a necklace with a “dragon tear” glass pendant, and I especially liked to wear it during Lent. They gave me two reminders. First, that the great dragon will, along with all evil in the end, put into submission to the God who is good (see Revelation 12, esp. verse 8). Second, that God is in the business of releasing us from our dragonish-ness, like Eustace in Voyage of the Dawn Treader, and that’s pretty much what Lent is for.

I called the samples “dragon eggs” just for their color, and for how cute the mini-skeins looked curled up into fat little twists. I’m calling the final yarn “Green Dragon,” for that color, for all the Lenten dragon-y reasons above, and for the location of the same name in the Shire, a place of much ordinary enjoyment and frivolity. 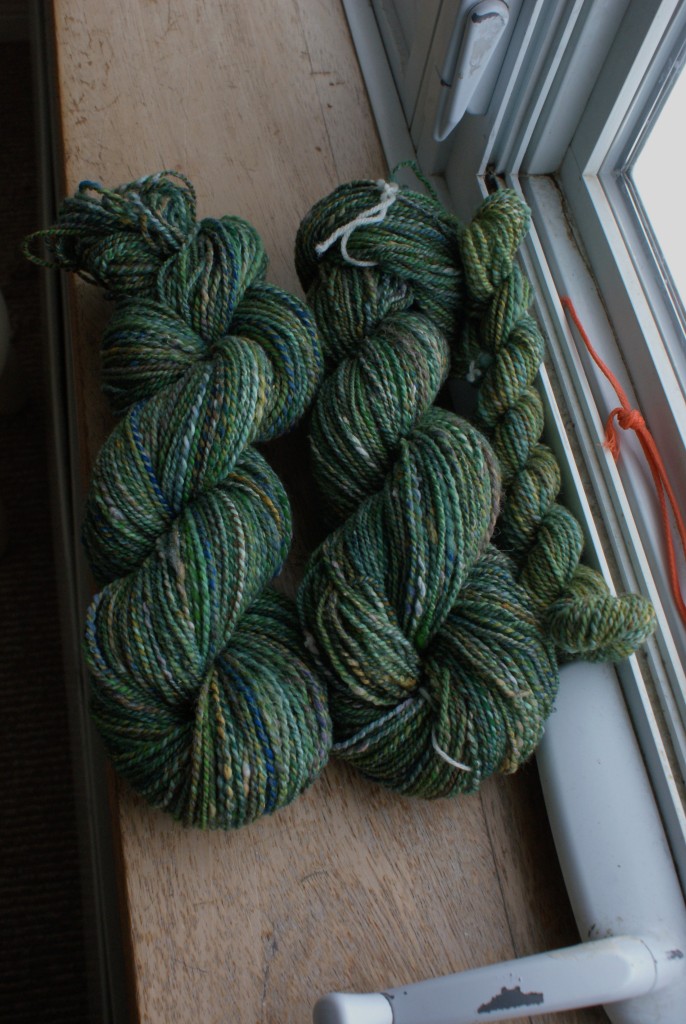 It can’t be very comfortable being wool that’s in the process of being made into yarn. It’s shorn off its sheepy home, then scalded, brushed, pulled through small holes, and finally stretched out and twisted under tight tension – usually more than once. But then, a warm soapy bath, and ah! The release! And something new and beautiful is born. That is Lent, and this yarn, and this week.

Thank you for reading. And thank you God.

2 thoughts on “Penitence and the Green Dragon”