Puni spinning not done yet, but in the meantime, want to see a bit of knitting? Though today’s update is hardly a victorious return to the needles.

I finished the beautiful laptop bag that I started making right after mom gave me the yarn. But I haven’t showed it to you because I didn’t really finish it.

It’s based on Grace’s Bag by Daniela Nii from the 2011 Interweave Weekend Knits magazine. It’s a lovely issue, all seasonal and stuff, and there a couple of sweaters in it that I would love to make. I decided to adapt Grace’s Bag into a cover for my laptop, because I really need something to protect it a little better as I endlessly cart it between home office and work office 30 feet away.

Even though the gauge and shape were totally different, it ended up being quite easy to adapt, because my guage was exactly half the  of the pattern gauge! The pattern has you knit both sides at once, across; I knit one side and then kept knitting to do the other side – so it was the same number of cast on stitches. I just threw another diamond in the middle.

It took a bit of fiddling to get the length right – for once, I measured my row gauge, but I did it wrong, so this time I made it too long! Ugh. I figured this out before I was done the second half of the first side, so all I had to do was pull out some of the beginning and re-knit it in the other direction. That way I’ll have a cast off edge on each side of the zipper anyway.

I finished the knitting, and I blocked it into shape. It’s lovely.

Then came the embroidery. Definitely fell into the “a bit of a pain” category, but I was listening to G. K. Chesterton’s droll but soothing biography of Thomas Aquinas, and it got done in an evening. 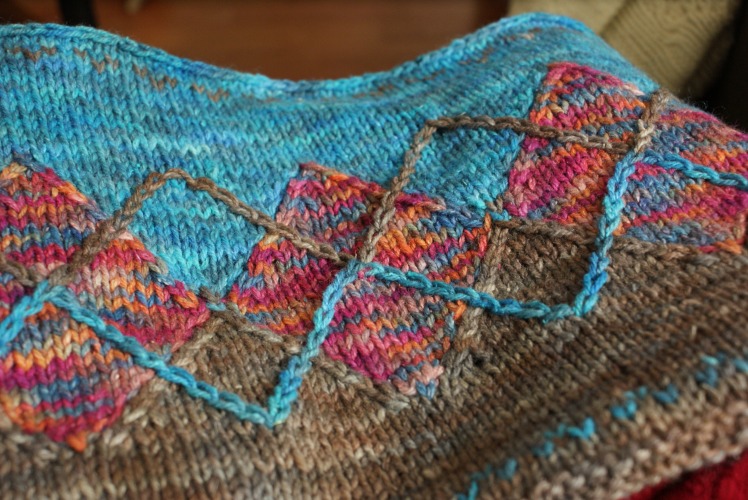 So… it’s finished. But it’s not finished. It’s a bag shape that fits my laptop in it, but it is decidedly not a laptop bag. It needs to be sturdily lined somehow and given a zipper and straps before it’s really done. It’s been sitting almost a month now, so I should really do something about it.

Do you have anything like this, sitting around, done the knitting, but needs some fussy not-knitting to make it really done? Motivate me, because I’m tired of this hanging over my head! I want the bag before vacation at least!

3 thoughts on “A Laptop Case: Finished-Not-Finished”