The last few inches of my handspun Lothlorien were completed while watching, for the third or fourth time, all the most obscure DVD extras on the LotR:FotR:EE. Not for the first time, I think to myself that the Lord of the Rings Films are, to a slice of my generation, our equivalent of Star Wars. Yes, The Books Are Better, but the movies were my way in, my imaginative catalyst. And they were made with such an absolute excess of love and detail that hyperbole is almost impossible. To take a profoundly worthy piece of subcreation, and from it craft a further subcreation, is a work worth savoring. So I do, right down to the last 45-minute documentary on prosthetics.

All of this, which some might label “geekiness,” makes me feel right at home with this particular pile of wool. The pound or so of wool on my lap came to me as a mysterious pile of white roving. I weighed it, braided it, and shipped it off to my mother, who dyed it to my specifications. Black walnut, pokeberries, turmeric, and black bean, with some mordant, were the only substances to transform the white into a fall spectrum. Then three years of spinning turned roving into yarn, and after another year’s wait, three and a half months turned yarn into something special.

Susan Pandorf’s Lothlorien Cape pattern is a thing of beauty and a joy forever. She has managed, in this and other patterns, to capture the architectural and organic fusion that so befits the elves. Knitting is so perfectly suited to this aesthetic. The tiny cable patterns at the top which expand to great cabled flying buttresses at the bottom are very anchoring.

I made my own adaptations, as I’ve detailed before: I knit the whole thing top-down (so as to use all the green and adapt the pattern to my yarn quantity); I knit seven panels instead of eight (because my gauge was larger); and I bound off in i-cord (because all those cables were going to feel rather jagged if just bound off plain without a solid base). I also plan to crochet around the base of the neckband, to tighten it up, because it rather sagged with blocking. I am very happy with these adaptations, for the most part. Flipping the pattern worked just fine with cables, but not with the lace, so there were a few points where I seriously had to fudge. But I already don’t notice.

As to my yarn’s performance: The 4-ply cabled handspun is definitely rustic. This would be a totally different piece with a smooth, soft, even yarn. But I am in love, because it so very in character. A building grown into shape out of living trees would not have perfect surfaces. The roughness makes it look stronger. As a matter of fact, it is stronger – I knit it on 6s, nearly sacrificing my wrists in the process. I regretted it at the time, but now that my wirsts have recovered, the look is worth it.

Regarding length: I did get nearly to the bottom of the pattern; I ran out of even my extra ball of doubled sock yarn before I could totally finish. The I-cord makes it not matter, though, I think.

At this complete length, it reaches past my elbows, and as such makes it, believe it or not, a hypothetically useful garment! Hypothetical because, in real life, I don’t know that I’m really brave enough to wear something so bright. And this is so worth being rocked out, not just being a shoulder snuggle for the couch. But I don’t think I have to worry about it, because I’m not sure it belongs to me. I give you, Canada’s Next Top Knitwear Model. 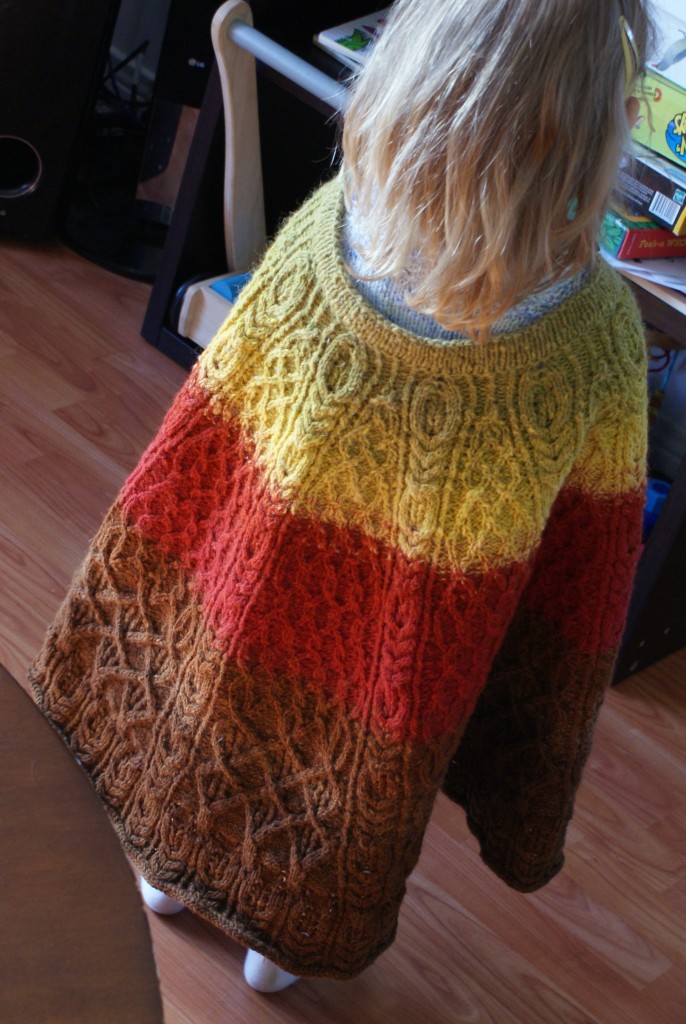 I told her she could wear it if she dresses as an elf for Halloween.

This was half worked in my homeland of encompassing trees, and completed as the fall colours have spread over the two-dimensional trees of these northern fairy forests. Having bound it off, in some small way, I feel I have integrated my loves for both the old and new. Even as I look forward to a heavenly forest where the leaves are always golden and never fall. To the place where subcreation might just take on a life of its own, and even if it doesn’t… we won’t mind.

2 thoughts on “Not Idly Do the Leaves of Lorien Fall”