Yesterday was the first day that I slept in, but still woke up and it was dark. My wiggly, 8-month-old alarm clock seemed unusually alert for what I thought was still the middle of the night, and I noticed I didn’t feel quite as trashed as I usually do for a midnight feeding. So I open my kindle, and it tells me that it’s 7:45. 7:45 and it’s dark as dirt outside.

I kicked Jared out of bed, retrieved The Baby from her crib in our walk-in closet, and released The Toddler from her room, who had been singing to herself as she usually does these dark mornings. Always keen to narrate her life to me, she announces, “It’s dark!” Then bounces out of bed and runs for the door, saying “Let’s go downstairs where it’s warm!”

It’s cold enough in her room that ice forms around her windowpane, because our upstairs heater only works periodically. Relatives, you’re not allowed to worry about us; the heat wafting up from downstairs still keeps our house much warmer than we kept our old place in Ambridge. And it’s N’s own fault for curling up at the end of her bed and kicking off her fifteen blankets. And its our own laziness and disorganization that keeps us from calling the repair guy. But still, she has a point. It’s warmer downstairs.

You can imagine my relief to find out that my kindle was on crack; it’s an hour earlier than I thought. Still, for it to be pitch black at 7 am is a little unnerving. Yet while I sit on the couch in my jammies and lazily entertain my children while waiting for Jared to get out of the shower (Mondays are our day off), the sky is already lightening.

We’re down to about four hours of sunshine right now, with over an hour of padding at either end where the sun’s steeply angled descent makes for lingering twilight. My experience of the day entirely revolves around that light.

What feels like “day” is what most people call “morning.” I’m no early riser, so I don’t fuss that the flaming ball herself doesn’t make an appearance ’till 9:30. The pre-dawn light is pastel and hopeful, and I’m not really going to look outside ’till after my coffee anyway.

The period when the sun is highest perfectly frames my “working day” – the longest period when my children are also up and about. If I take them out, we go then – library on Tuesday, play group (with daddy) on Wednesday, visit with friends on Friday, a special event on Saturday, church on Sunday. We don’t do all of these every week, but we do enough that I look forward to Mondays and Thursdays at home, where we are well supplied with our  own creative amusements.

I’ve never been so grateful to be a homebody.  When I spent a year in rural Ohio, I only noticed I lived in the middle of nowhere when I had guests come to town to visit, and we wanted something to do. (When we got sick of walks, I usually ended up taking them to the outlet mall, forty-five minutes away.) Here I thought it was a defect that I prefer to be at home, a temptation that I’m always ready to amuse myself, a childhood privation that we spent so much time at home, a failure that I’m not really very “outdoorsy.” It turns out these are ingredients for relative contentment, when weather and small children wall me in with limits. 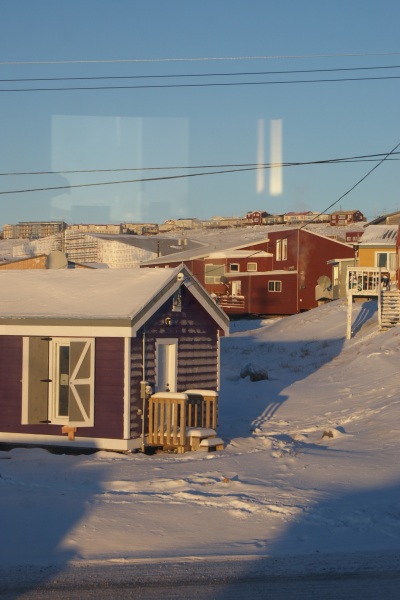 While the sun is up, I forget that it’s going away again so soon. The giveaway, though is that the light is always long and golden. When we walk to the library, every pebble in the parking lot casts a three-foot shadow, and the Cathedral’s arching steeple glints orange at me on the walk back. That’s at quarter to noon. I forget, most days, to rush, to make the most of those hours of light. Though I have been known sometimes to sit in the stairwell, with its big south-facing window, and just sit in the orange glow like a cat. I got a hammock for Christmas last year, and I fantasize about hanging it there on the landing. 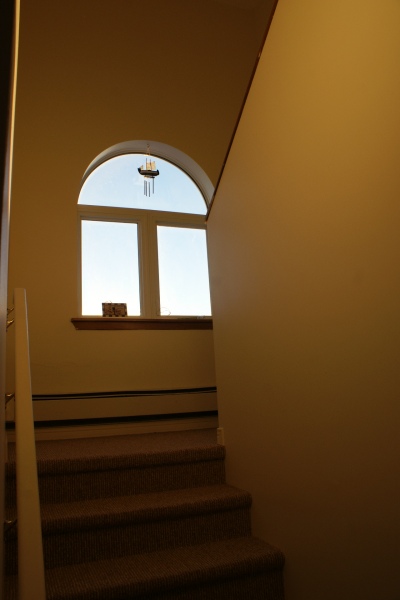 Lunch is usually around noon, even when we sleep in, and we sidle the kids to bed around 1. By the time they’re asleep, I walk down the stairs, and the south-facing stairwell window greets me with a sunset. I am always surprised, and if I haven’t gone out that day, a little regretful. N has always been a little confused after her nap, thinking it’s a new day, and calling it a “nap” when she goes to sleep for the night. Two days ago she spilled milk on her Sunday dress, so we just changed her into her jammies for naptime – a mistake. She was so confused that we were doing naptime routine, and not bedtime routine (with the addition of toothbrushing and a bible story and prayers) that she didn’t sleep at all.

Naptime, when I get it, is prayers, then work. A solid 30-50 minutes of Bible reading, prayer, and journaling, a lifeline to sanity which I am learning not to neglect, even if it eats up the only alone time I’m likely to get that day. Of course I DO neglect it, because I am a punk with my own petty priorities. I get less alone time than sunshine, most days, and regret it more if I waste it. But, whether piously or selfishly, I spend that time curled up in the corner of the couch where I can see southwest, where the sun just was, but the post-sunset twilight is grey and unsatisfying. 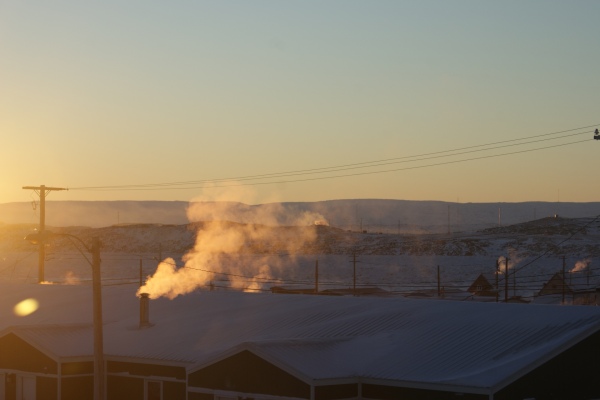 Everything after the sun goes down feels like staying up late. Post-nap, a period of variable duration, is a sort of very long evening by the fire, sans fire. We play, we read, we cook, we build trains and pyramids, we sing songs, we watch movies probably less than half the time – we hibernate awake. Jared comes back at some point. Dinner, then a long cozy bedtime ritual, then adults are free for work or play: Monday ACW (me), Wednesday meetings or women’s Bible study (me), Thursday confirmation class (Jared), Saturday gaming group (Jared), Sunday church (Jared). Again, not all of these every week, but plenty.

Because my brain kicked into “staying up late” mode at 2 in the afternoon, I usually end up overdoing it, staying up too late. Then what with night feedings and dark early mornings, I often oversleep. I feel like a bear that’s almost allowed to hibernate, but not quite, so I never get quite enough rest. In reality, I’m a spoiled-rotten mother of two small children with good sleep habits, who lacks the self-control to make the most of what I’m given.

I’m fixated on the sun like I’m its busy, long-distance girlfriend. Just now, when I went up to try to convince The Toddler to nap for the third time, I saw the last sliver of sun peeping gently over the mountains. I said goodbye, and imagined where his arc will continue around the world… through my wall and floor and kitchen and back to out my window behind the church. It’s comforting to remember that he’s shining somewhere all the time, even if not on me. Say hello to Australia for me. When I walked back down the stairs three minutes later, he was gone – his exit door flush with a wall of peach fading to periwinkle.

2 thoughts on “A Week ’till Solstice”