Ha. No more. That is like, the opposite of now. Between a kitchen with actual counter space, and the price of bread, I have embraced the long-scorned bread machine. (Indeed, I briefly had two.)

Now I have an excellent Black N’ Decker model that can make a 2-lb loaf, and I’ve been going to town. We’d been observing a family sabbath for over a year (or is it two?) but I made challah for the first time.

Ok, so it’s just a white bread recipe with the dough braided. But it was super fun. So fun that, the following week, I tried the six-braid version (this time with a half-whole-wheat bun dough recipe):

Not perfect, but who cares? It’s so satisfying to bake something so pretty with so little work! And it’s bread.

Besides that, I’ve been making a lot of sandwich bread. I get the most success when I just do the dough setting, use half whole wheat, and bake it in the oven. But one attempt at 100% whole wheat sank so fantastically that it’s worth remembering:

We made Sauron Sandwiches. I should make it again just like this on March 25th, anniversary of the destruction of the One Ring. (Kidding, but giggling. I am a dork.)

Back to the calendar.

Having acquired some practice at this feast-day planning thing, we really geared up for Michaelmas. It’s a big-ish deal in the Anglican and Catholic churches, and a very old harvest holiday in England. Additionally, I’d just read a book about angels, because it seems God keeps bringing them to my attention lately, so I figured I should find out what they’re about, and might as well throw them a little party.

It so happened that, on September 29th, we had an opportunity to go to a community feast, try some country food, and learn about Canadian/northern politics. We weren’t about to miss that, though I did forget to take my camera. (There was raw char. Yum.)

We did have a Michaelmas lunch, though. Starting with a St. Michael’s Bannock. 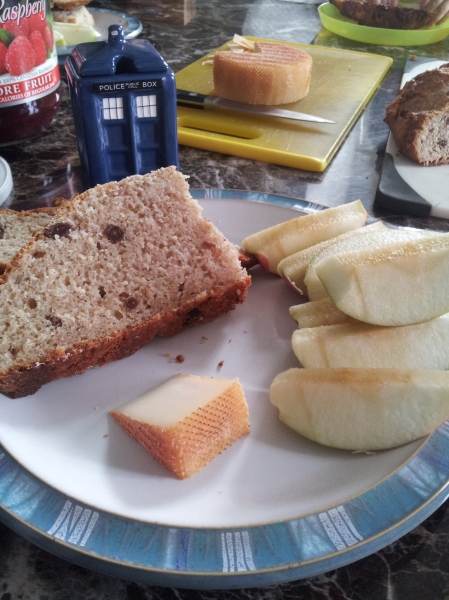 The TARDIS sugar bowl snuck into that picture. Though now that I think about it, Doctor Who is probably an angel. (We will not discuss the weeping angels at this time.)

And the next day, there was dessert: blackberry pie. There’s some story about Michaelmas being the last day to harvest blackberries, because the devil fell out of heaven that day and smote them, or something, I lost the train of logic somewhere. Well, our pie was one half-pint of expensive blackberries from the store, and a bunch of freeze-dried raspberries from our Thrive supply. It was pretty good, except I forgot to rehydrate the raspberries, so they absorbed all the liquid and then some. The result was nearly caramelized, but edible.

We migrated the rest of St. Michael and All Angels to our Saturday Sabbath dinner, when I made Apple Chicken.

(There is chicken under there.) This recipe has very unappetizing pictures, but the meal was fantastic. It’s the rare meat that has N asking for seconds. Add roasted carrot chips and the above half-whole-wheat challah, and it was quite the feast.

For dessert, there was one hilarious idea that we had to add to make our Michaelmas celebration complete. The idea: Make devil’s food cake, then stab it with cocktail swords to commemorate St. Michael casting the Devil out of heaven. We couldn’t find cocktail swords, but we did have N stab her piece of cake a few times before she ate it.

N loves knives (don’t ask), so she thought this was splendid, and spent the rest of dessert repeating this bizarre conversation:
N: “Can I stab it again, Mama?”
M: “You can stab it as much as you like, my dear.”
N: “I will stab it many times.”

M, of course, needs no implements to wreak destruction on a piece of cake.

On tonight’s menu? Bread pudding! The holiday: M’s and mama’s half-birthdays. The association: I had a loaf of sandwich bread that didn’t turn out, and M can probably eat bread pudding.

One thought on “In my Kitchen: latter September (part 2)”