Finally, I can check another Really Big Thing off the list of Things I Said I’d Get Done Before the Baby Comes.

I pre-drafted the last bit of red on Saturday at some point, then spun it up on Sunday. I had a chance during Sunday’s naptime to make the last .6 oz into perfectly pre-drafted little nests. They are sitting atop the computer box because I did it while playing video games. Talky video games, you know – the type with lots of dialogue and cutscenes during which I can put down the mouse and use my hands. My favorite kind. 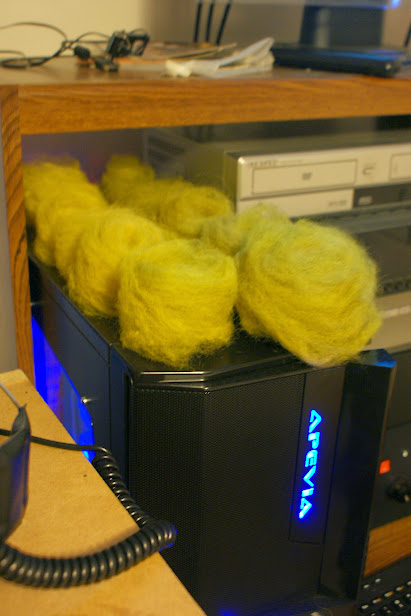 Sunday night we hunkered down and stayed up late watching the new Robocop (which was really good, by the bye) and I spun those suckers down. There you have it – the very last of 4000 yards of singles, done. 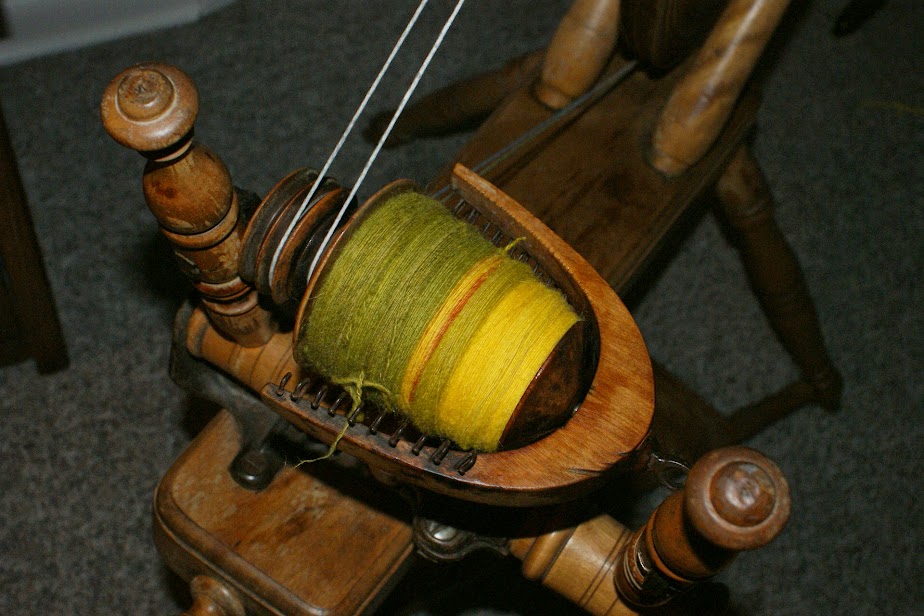 (I was hoping, of course, that this would be the equivalent of the night we watched Tron: Legacy, when I went into labor with N. No luck. Nor with The Best Exotic Marigold Hotel the following night. Next I think we’ll just try shotgunning Star Wars.)

It helped a great deal that the final two colors were really smooth. It seems the dye process was pretty harsh on the red portions, as most of that was very nuppy. But the yellow and green were relatively nice to spin. The brown was somewhere in between – the black walnut dye is harsh, but it didn’t have to be mordanted, which probably helped.

Monday I wound off the final bobbin of singles, with my little “helper.” (I still can’t get her to keep winding the crank the same way. I think that should be a priority life skill. She can put on her own undies; clearly this is next.) 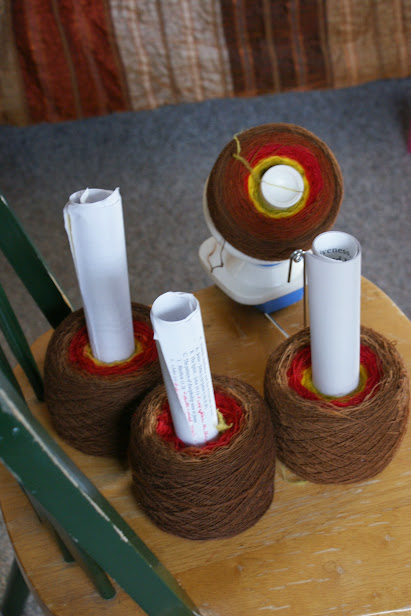 After a little archaeology on the papers holding out the centers of the previous balls of singles, I was able to figure out what order I had spun them in. Mostly, I didn’t want to put the two most recent singles together. I think I was able to match #2 (late 2014) with #4.

Much to my surprise, my spinning was actually much better on ball #4 (on the right). I thought I was rushing it with this last sliver, but #2 (at left) is much worse. Lots of big slubs, and much less yardage. My extended pre-drafting seems to have really paid off. And maybe, I don’t know, I am a more patient person?

… it must have been the pre-drafting.

I am okay with the colors overlapping between balls a little bit, but I drew the line when ball #2 started turning orange before the ball #4 had entirely turned yellow. I broke both, wound all the yellow from #4 into a center-pull ball, and plied all that before rejoining both balls to be plied together. I’m having to do that again with the reddish-brown part, partly because ball #4 has a whole lot more reddish-brown, and partly because I’m running out of reddish-brown in ball #2 just as I’m finally getting out of the red in #4. I don’t know if that makes any sense to you, dear reader. But then, I don’t even know how many spinners have tried to do goofy gradient things like this; I’m sure it’s quite ill-advised.

But one advantage of genuine ignorance is that you haven’t figured out what you “can’t” do. So sometimes you do it anyway, because no one has told you it’s a bad idea. 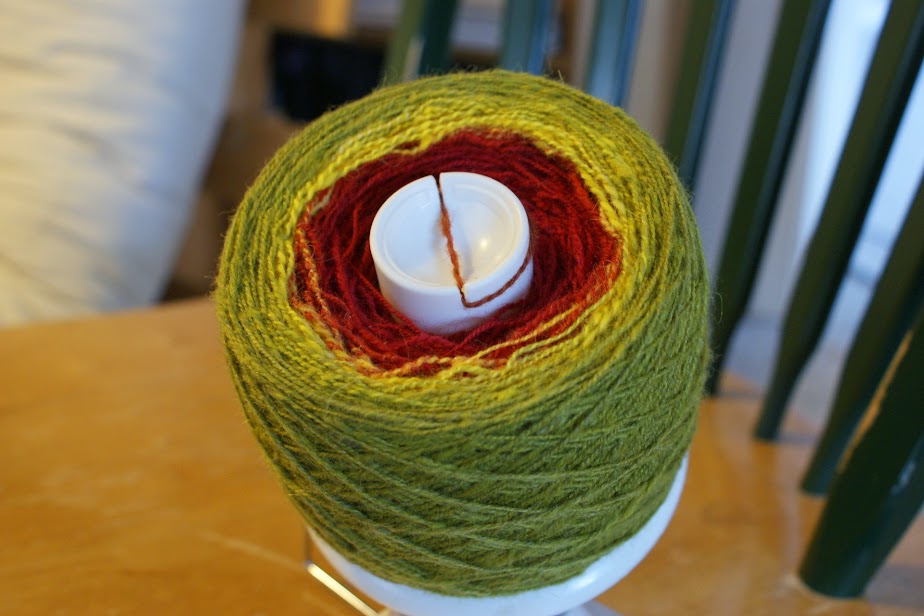 Filled my first bobbin with two-ply, and it took about three hours. I intentionally overplied it as much as I could stand, since it’ll have to be plied back again. I have to do this three more times, putting the rest of balls #2 and #4 together, then plying #1 with #3. Then I’ll ply both runs together to end up with a thousand yards of cabled gradient.

I estimate it’ll take me another 15 hours of sitting at the wheel. Who knows, it might get done this week; it’s not like I made plans.

Just to be clear, the “before the baby comes” goal was the singles. She may not use incomplete plying as an excuse not to turn up. Nope. Not Permitted.