Or is it shriving? I don’t feel like looking it up.

Our Shrove Tuesday today was very much… a Tuesday. We didn’t eat pancakes. We left the house to give a little presentation on our trip at school, which went really well, and during which I carefully herded miss goopy-eyes away from the only other child present. (I can embrace the relaxation about colds, but pink eye deserves some space, yes?) We didn’t do anything else church-related or liturgically appropriate.

We did have one special activity, for the sake of our oldest little’s first engaged Lent. Saying “Alleluia!” is just about N’s favorite part of morning prayer, so I’ve been talking all week about how we’re going to put our Alleluias away for Lent, to get ready for Easter. She’s really latched onto the “Easter!” part, and has pulled out her book The Story of Easter to read carefully many times. But I think having to skip Alleluia may be difficult for her, and may present an opportunity to explain the theology behind Lent. That is, if I can myself grasp it thoroughly enough to explain it to a toddler. Which is, quite seriously, the best test of one’s grasp of any point of theology.

We tried with our little activity today. I made her a little “Alleluia!” coloring sheet, which we scribbled on together.

(Coloring is still rather new in this house.)

I rolled it up, she picked a room to hide it in, she gave it a kiss goodbye, and I picked a hiding place for it.

Mostly she seemed confused as to why her coloring paper was going away, and wanted to make sure she could keep the rest of her papers.

All this godly play stuff seems awesome, but as yet it is pretty foreign to me. So little attempts like this make me feel rather proud of myself, yet quite inadequate at the same time. If you want real ideas for doing liturgical things with children, there are many other blogs you can read about them! In fact, I should go read them, but having lost my smartphone has reduced my blog-reading time to almost-nil. Then again, it’s improved my ability to be attentive in my relationship with my daughter, which is more than any godly play idea could give me. So I’m not going to stress about it.

My penance has started a little early, knitting a pair of baby pants that aren’t for my baby. They’re for a worthy cause; one of my students was having trouble finishing this and a baby sweater for her next grandchild, so she’s paying me to finish them. I’m on a deadline, so I have to give these all my knitting time, which doesn’t usually happen with plain stockinette stitch. So I’m a bit bored. But it’s nice yarn (Shibui sock) which interacts happily with the bamboo needles, so I shouldn’t complain. Even though I just did.

Finally starting to engage with the fact that I’m having a baby in five weeks, give or take. We dug through the attic to the very back of the girl clothes – which, thanks to the generosity of others, we have stashed up through age 5 – to find the 3 month winter stuff. On the way, N found a big bag of shoes that became her new toy. 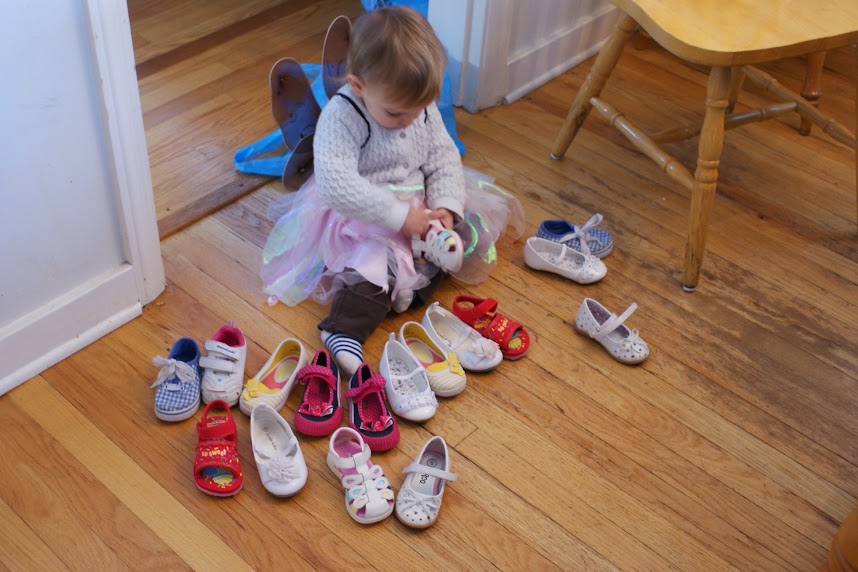 There’s a feminist corner of my psyche that does a little twinge, not at the beautiful sight of my creative little girl, but at the anticipation of the comments of others seeing her in a tutu, fairy wings, playing with shoes. “She’s so girly!” I imagine them saying.

I tell myself she is using the tools at hand to practice role playing, and organization and matching skills. And while being a girl means her choice of tools means she might be more likely to be stereotyped with her gender, at least her gender identity won’t be questioned (as it would if she were a boy playing dress-up and organizing footwear).

These are the things I tell myself. While in reality, if I want to call myself a feminist, I will embrace that she is just a wonderful little person, who gets to make her own choices about what she likes.

All the tiny ways we have to die to ourselves as parents, no? Sigh.

Are you doing anything interesting for Lent? I don’t know that I’ll be giving up anything, though I should probably save all this Valentine’s Day candy for Sundays. I’m more thinking about taking up a new book to read for the season. Things will get interesting, having a new kid right in time for Holy Week, so I’m inclined to keep things simple.