Uf, I feel terribly behind on blogging. On this site I don’t feel like a two week absence is really worth comment, but yesterday I listed out all the posts I have been wanting to write, and I really am terribly behind. There’s gluten experiments to update you on, veggies to report, advent fun… even though I can’t show you my Christmas knitting, there’s plenty to catch up! So I’ll start two weeks ago…

Christ the King Sunday is the last Sunday of the Christian year, always the Sunday before Thanksgiving and before Advent starts. I feel a special connection to that holiday, since the church Jared and I attended while we were engaged was called Christ the King. Both there and at the church I attended in college, the two places where I really fell in love with Anglicanism, the feast of Christ the King was celebrated.

Since my hobbies have become more culinary, I have been looking for some good input for liturgically appropriate food ideas. Imagine my glee to find this site. I spent a whole afternoon browsing it, and even though bits of it are so Catholic (little boxes of sweets in November to remind us to pray for souls in Purgatory! Childhood me would have loved that), there’s enough crossover to find a lot of fun ideas for feast-day desserts. (If you know any more Anglican sites of liturgical-year food/culture/family activities, please tell me in the comments.)

So I decided to make a crown cake for Christ the King. I actually got the idea and recipe from LMLD specifically.

The results were… humorous. Mostly because I have very little regard for the delicate chemical process that is Baking.

1) I used a non-GF recipe, and just subbed Jules GF flour mix. I’d heard this is a really good flour mix for doing that, so away we went with very little reflection on the subject.
2) I am working on getting sugar out of the house (I should post about that too, ugh), so I did my now-usual substitution of 1/2 c honey for every 1 c sugar, with 1/4 c reduction in other liquids. Except this recipe had next to no actual liquids in it, so I just didn’t do that part. Er.
3) We didn’t have any yogurt in the house, or even sour cream, and going to the store was not feasible… so I threw in 4 oz cream cheese and some milk. Never mind that this would turn it into an entirely different kind of cake.
4) I read some blogs on how to properly use a bundt pan… after the cake was already baking.
5) I tried to remember the last time I had baked a cake, and in discussion with Jared, the last cake we could remember me baking was for his birthday… when we were engaged. So… over six and a half years ago. Our cake pans long ago rusted out from sitting under large indoor pots of chard and kale.

So… yeah. The result took a weirdly longer time to cook, collapsed humorously in the silicone bundt pan (which we’ve never gotten to work well), and was very dense, almost like an eggy pound cake. However, it was edible, and I ate my slices for breakfast with lemon curd. Not bad at all.

The browned butter icing was super tasty, though. Even if being piped through a ziploc with a corner cut off did not lend itself to excessive cuteness.

So I will never be a pastry chef. Not exactly news.

Enough words. That was way too many words. Less words for the something pretty: the thanksgiving table(s) at my in-laws house. 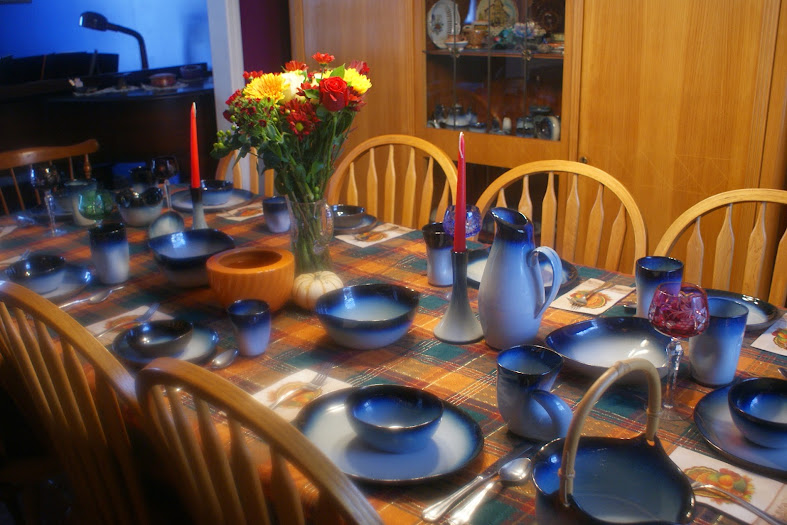 (And no, I didn’t put on any filters; my lens was just foggy on one side and I didn’t notice.)

A bunch of Osborns full of food.

So part of why I haven’t been posting this week is because I’ve been regressing a little bit. And when I say “regressing,” I mean literally “doing the things I did to tune out in high school.” Like, watching SG-1 and playing adventure games. I haven’t been that inclined to cook or clean or knit or blog or walk or whatever. I kinda just want to be left alone to play Monkey Island (TM).

Not that I don’t have my share of excuses. There’s the business of holidays and traveling, and the fact that I’m only just over a weird cold-sinus-thing, and a couple unpleasant new pregnancy symptoms, and the sudden and total gloom of every single day being miserably overcast with no more hope of surprisingly warm days until at least March. That’d be enough to tempt anyone to some serious hibernation.

It probably isn’t much more than that, though there are a couple issues for long-term healing that are slowly surfacing as well. (Nothing earth-shattering, but definitely not internet-ready.) The real descent of winter has always been a little hard for me, though nothing like it used to be. I hit a wall, then find a quieter stride.

But like any good avoider, I have to watch myself. Because tuning out is only so restorative, and at a certain point gets in the way of real recharging. And I quite often just lack the self-control to choose the true rest, that will make me well, over the “relaxation” that will just scratch an itch and leave me still tired.

This is part of why I need my vocations. To be a mother, and eventually to be a pastor, there is no way to get away with long-term tuning out, regular avoidance. My personality carries a powerful undercurrent of inertia that would leave me quite content – if not exactly happy – being half-alive to the world, to God, to myself. But on this life path, I am forced back into patterns of spiritual discipline, just in order to keep doing my job. I am forced to keep growing, because my interpersonal skill set needs work. I am led to a better way than my flesh would let me get away with. Harder, but more alive, and becoming more alive.

So next time you are tempted to put a pastor on a pedestal… just remember, many of us are called to this life not because we are better people. Quite the opposite.