After an amazing adventure like CPE, or any generally amazing, long, and challenging summer like we had, reaching the finish line is cause for some celebration. Wouldn’t you know, there was a ready-made celebration waiting for me, right when CPE ended. I had worked a little extra here and there so that I would finish my 400 hours on Wednesday of my last week. And that very Friday was when this started: 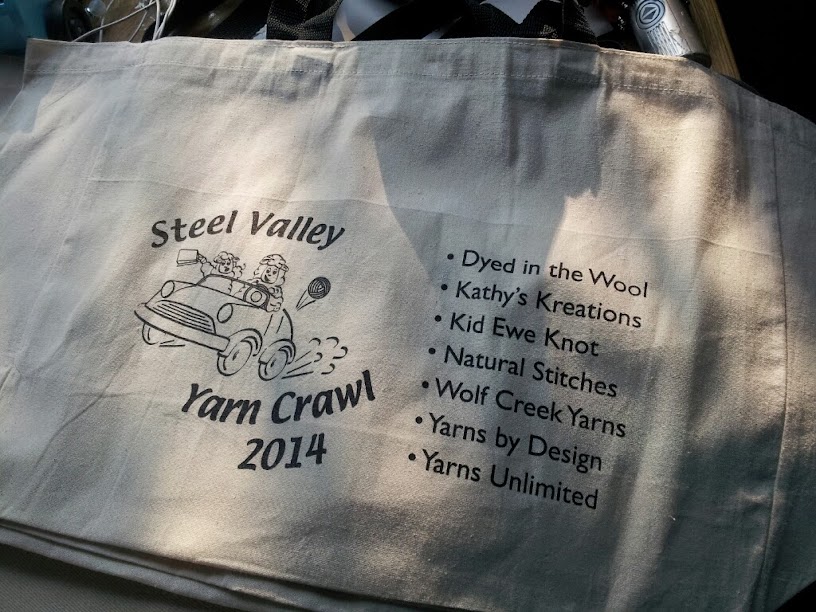 Ten days of yarn crawling, put together by Natural Stitches, involving raffles and free patterns and generally a chance to explore the region’s yarn shops a little more. It’s been nearly a month since Mom and I went on this adventure, but I’m finally ready to share our little excursion with you. Two yarnaholic women, seven yarn stores, and ten days. (Actually Mom did them all in two days, and I did them in seven.)

For the next week, I’ll share our whole journey with you – the stores, the cities, the spending, and the stitches that came after. Hang on, it was a wild ride! 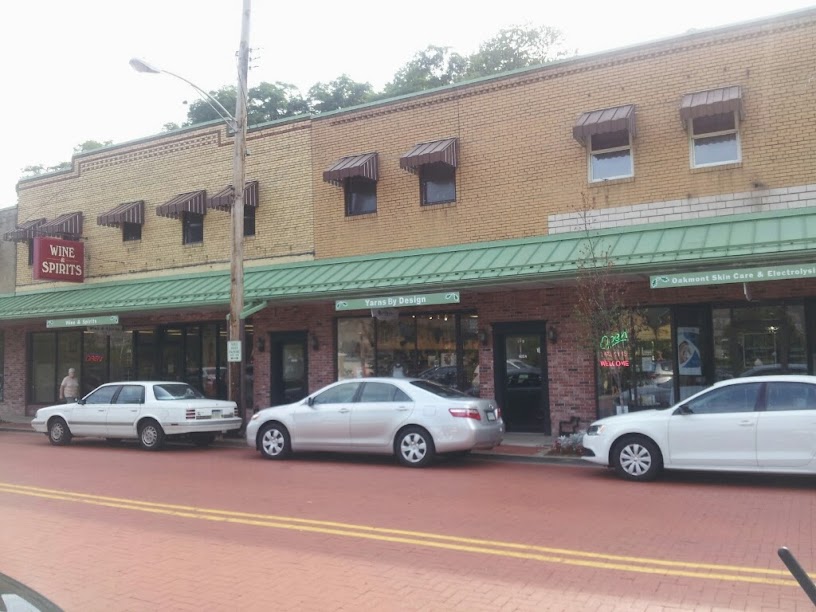 We packed up Mom’s little Hyundai first thing Friday morning, with a marathon day planned for the first day of the crawl.

Our first stop was Yarns by Design in Oakmont. Oakmont is an adorable little town about an hour away from where I live; I think of it as the Sewickley of the East Allegheny. Lots of sweet little shops, good food, boutique sorts of places. I haven’t spent much time there apart from this yarn store, but whenever I make it down, I always wish I’d planned a longer (and spendier) stay. 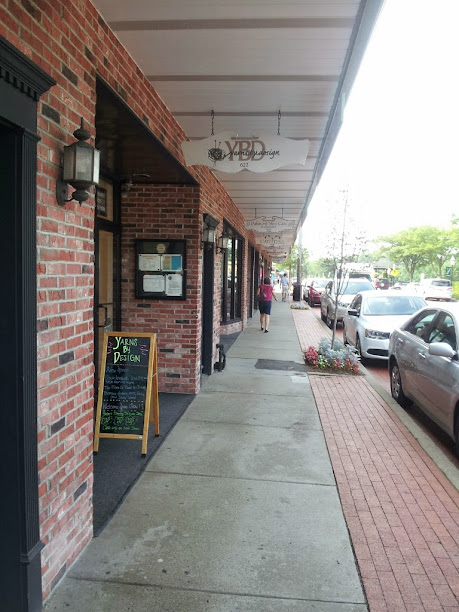 I’ve been to YbD a couple times before, but it was over two years ago, and they have long since moved into a bigger, prettier, and better-located space. The ladies who work there were very friendly. They have a good selection that has only broadened since I was there before, including an impressive amount of Malabrigo and Habu. They had just gotten a new shipment of Madelinetosh when we were there, too. 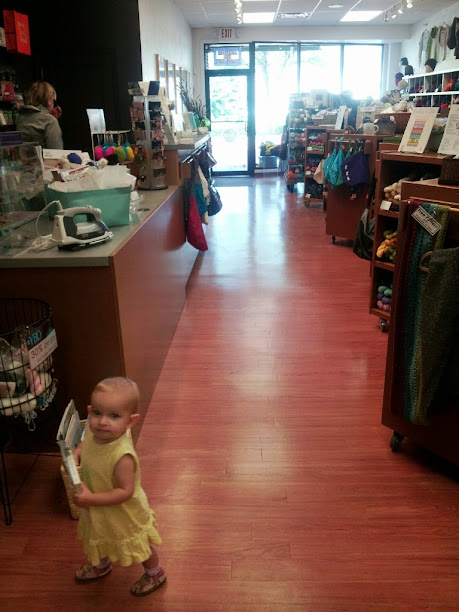 I was there for the Habu, honestly. As far as I knew, it was the only local place I could get some (this information would be corrected later that day). The last time I was there I had come extremely close to buying yarn for a Kusha Kusha scarf, just for the sheer novelty it will be to knit it. I finally decided – what the hay? – and settled on a combination of black-and-copper which I’ll hold together with a pumpkin-heathered merino. Mom rescued a beautiful Artyarns skein from the sale bin, and will pair it with the two complementary merino-silk skeins you see below to make the vest pictured. 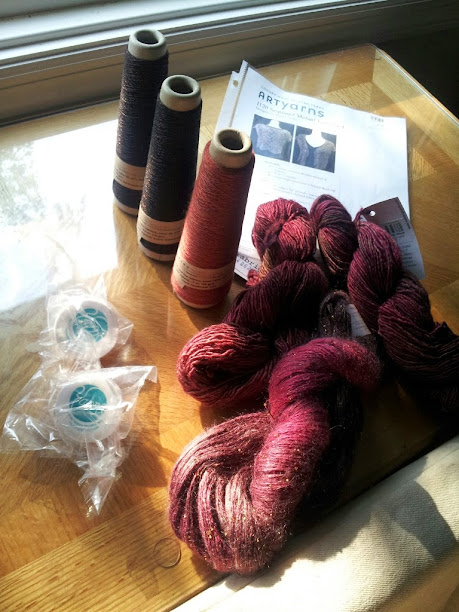 We each spent enough to score a free tape measure, which is always handy. Naomi adopted mine, until it got stuck under the dishwasher.

The final stage of YbD’s contribution to the tour was a little bit of eyelets.

Each store provided a pattern for a cowl, made on DK-weight yarn. You had the option of making a whole cowl out of the one pattern, or putting it together with other patterns from other stores. When it comes to knitting, I am nothing if not a completionist. So I decided to knit one cowl with a stripe of each pattern, in the order that we visited the stores. 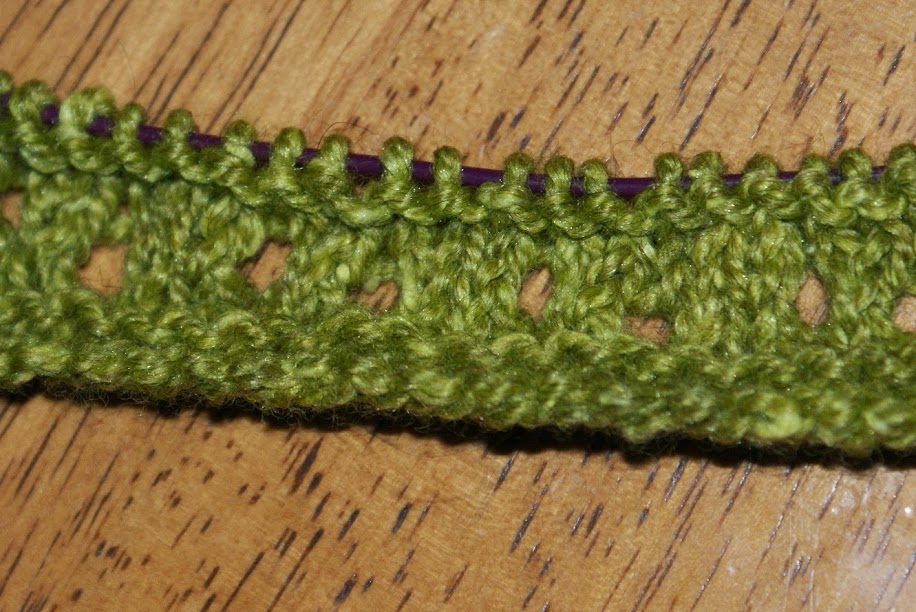 As clever as the plan sounded, it did not have a rip-roaring start. I only had space for one repeat of the first pattern in order to make it the recommended 9″ width; I did not try to make it wider for fear of running out of yarn. To accommodate this, I scooched the pattern around to put the eyelets – which seemed like the main “action rows” –  right in the middle of the stripe. It ended up looking… odd. And tending to fold in half. This might be a pattern that makes a little more sense if you knit more of it, or maybe I just read the pattern wrong. But I accepted what I had, trusting that subsequent patterns would add to the picture.

Tomorrow – on to Ross Township!