If you’re in this family, right now bronze is a WAY cooler color than gold.

Every single hockey team from the Eastern Hemisphere goes into the Olympics with one aspiration: the bronze medal. The US and Canada, having a huge pool of people and a nationwide obsession, respectively, invest way more into their national hockey programs than the rest of the world can dream of. The women’s hockey teams from North America can take the whole year off before the Olympics and focus on training together. Meanwhile, European and Asian teams keep playing with their college teams to stay fit, or take an alternative route like Jessie did, practicing with a men’s team. the Olympic team for Switzerland was only announced in January! So the competition was fierce. The top teams like Switzerland, Russia, and Finland, came in with their eyes on the bronze. You can only imagine our pride, then, to see this a picture of Jessie’s bronze medal on her instagram.

Jared had to go into work while the game was happening, so we declared an absolute communication fast, and held off ’till the evening. I didn’t know it at the time, but I bound off my shawl around the same time that Jessie scored the go-ahead goal for team Switzerland. 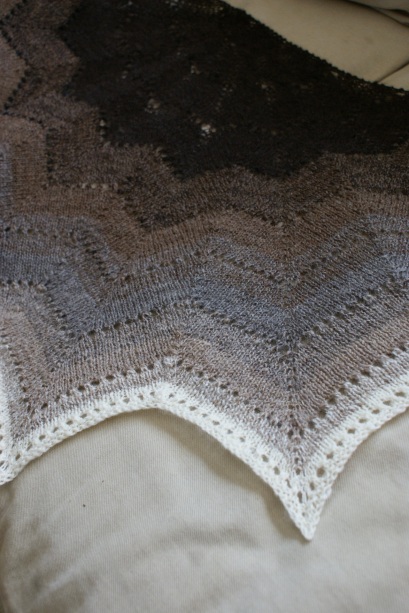 Mom finished and blocked yesterday too. We both had a decent bit of yarn left when we came to the end of the pattern as written, so we improvised different endings to get the most out of our final colors. I added another half section of stockinette, an eyelet row, two rows of garter stitch, and bound off on the wrong side. Mom added a few more rows of stockinette, clustering some eyelets around the points, with a garter stitch row before the bind off. 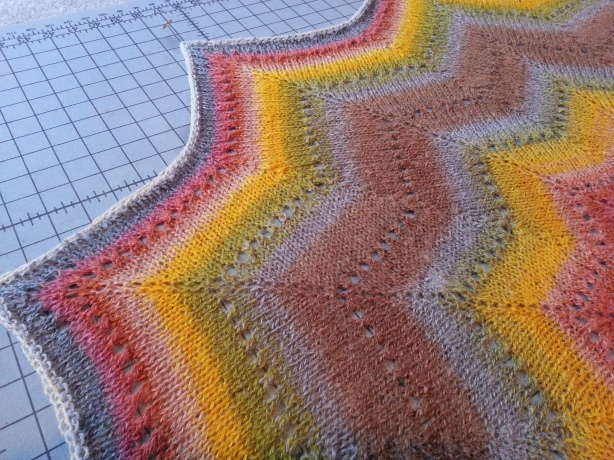 With them all blocked, they will be ready to wear at Naomi’s birthday party tomorrow!

We earned gold in our shawl sprint. But I think, honorarily, I am willing to trade it for bronze!