Pattern review: The yarn I chose was appropriate, but the needle size was not. I could have knit these socks on 3s or 4s and they would have still fit, and been a lot less unpleasant on my wrists. (I used 2s.) Other than that, the pattern is quite lovely. The dutch heel was the best I’ve done yet (no pooching! Not sure why). The simple cable pattern flanks a traditional gansey knit-and-purl stitch. That’s the only thing I don’t like about them being on the tight side; the gansey panel is distorted.

But they are warm and cozy and wooly and likeable. (For a somewhat preemptive yarn review, click here.)

Naomi still thinks the leftovers ball is the most interesting toy on the planet. The chip clip is its closest competitor.

I opted to forego the gansey panel on these leggies, because I wanted to be able to crank them out without really paying attention. I swatched (egads!) and opted to use US5s and 1×1 rib.

I love them. They are a sort of generic fall mix, so they go with nothing and everything at the same time. Baby leggies are so useful for babywearing, and for extending the life of dresses a little longer into the fall.

I wanted to  do some increases between ankle and thigh, since those different areas of chunk are remarkably different on the Nomes. But I wasn’t really thinking, and had done some fancy “seam” style increases before realizing that if I did all the increases like that, the cables would slowly migrate toward the front. But I didn’t want seam increases on the back. And I didn’t want to rip. So I compensated by putting more subtle increases near the cables on the front, and keeping the seam increases going on the back. An awkward solution, to be sure, but effective. 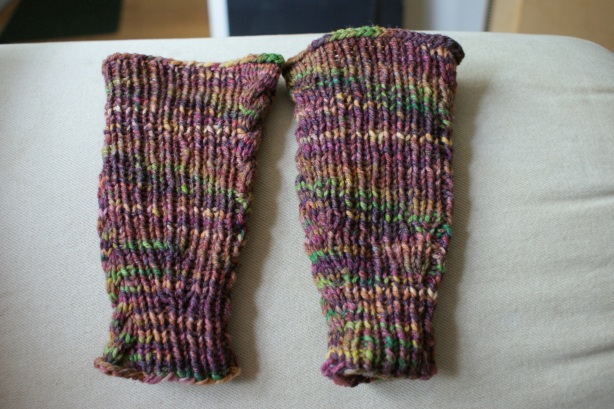 The above picture shows the back of one leggie on the left and the front on the right. Below they are both facing the same direction. 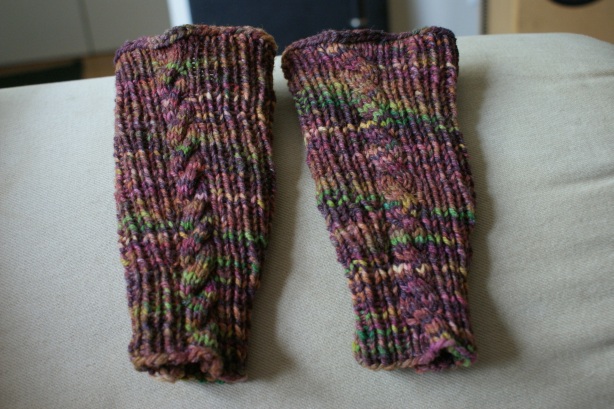 I am under no delusions that both leggies are going to stay forward-facing for any period of time, anyway, but it’s the thought of symmetry that counts!

In five days, September will be here, and in two more, the school year will start. I’m about as ready for either as I can imagine being, but the impending unknown still makes me pretty nervous. School with a baby will be interesting, to be sure, but I have a lot of help and a light load. Might as well enjoy both things while they last!

6 thoughts on “Ready for Fall…”