Some time last year I started to knit a summer sweater. It was out of yarn that I won as a special prize at the Maryland State Fair years ago, but it wasn’t really something that I would ever have picked for myself (I don’t really think of myself as a periwinkle person, and I don’t buy 100% cotton like, ever), so it wasn’t getting used. It survived destash after destash because, you know, it was a prize! That’s special, right? But it was taking up too much space to keep forever, so I turned it into a Brainless Project. You know, the kind I keep on hand to do during movies and while reading textbooks.

I found a pattern I really liked: Mary Jane by Sarah Moore. I even paid money for it – something I did infrequently until recently (Because when you want a perfect little baby sweater for your perfect baby, 7$ could never get in your way).

I knit it. It was predictably boring. It was with me through a few books, several moves, and so on. It wasn’t super fun, because the yarn wasn’t very nice to work with. Not quite as bad as Lion Cotton, but in that category of bad. It’s nice to wear and sturdy, but might give you carpal tunnel. So when the summer passed and it still wasn’t finished, it found its way to the bottom of a drawer, where it languished.

But recently I’ve been in a Finishing Things Mood. This happens every couple of years or so when the UFOs get out of hand and I start feeling a little panicky. When an FTM strikes, I have to blast through all the project still on the needles in order to give myself permission to have fun knitting again. So I pulled MJ back out and we gave each other a long gaze. Then I started in. I lengthened the collar, adding some decreases, and had to shorten the sleeves because I was running out of yarn (apparently a lot of people have had this problem).

I’ve been forgetting to take pictures of works in progress lately, so before I finished the sleeves I took a few shots. Naomi helped. 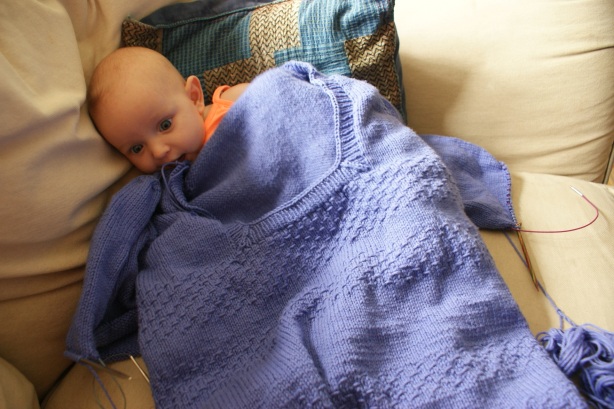 (She is already at the stage where her main way of exploring the world is by putting everything in her mouth. I can’t believe how soon that happened. Her main obsession is all things fabric. The logical person might say this is because it’s the only type of thing she can easily grab; I maintain that we have bred a little seamstress.)

Yarn Review: This was a generous gift to the Maryland State Fair of 2009 from handknitting.com. The yarn was “Freedom Cotton” by Twilleys of Stamford, and I didn’t like it to knit with. I don’t like cotton generally, and this is the kind of yarn that will make you dislike cotton. It’s stiff, thick for its posted gauge, and slow. I was going to feel bad about saying such a thing about a gift from a nice website, then I looked them up and the only Freedom Cotton they have left is apparently 7 balls of ancient stash that they admit are “dusty.” This is hilarious and makes me want to buy more fun things from them for cheap. I think they invent new copy for everything they list.

Pattern Review: Mary Jane is a beautiful sweater. I love the attention to detail, with different types of increases on the front and back, poofy sleeves, and square neck. However, the pattern has a few issues. This won’t affect your ability to knit it, but the number of repeats of the “snakeskin” pattern are not the same in the pattern as in the picture. This bugged me. It also doesn’t matter. But it bugged me. Second, from the ravelry comments, many people have had issues with the recommended amount of yarn being insufficient. I had to shorten the sleeves by about three inches. The recommended amount of yarn will reliably get you adorable short sleeves like in the ravelry cover picture, though. As a designer myself, I felt a little niggled by those types of mistakes. But don’t my fussiness stop you. It’s a beautiful sweater, well conceived, and good for many body types. There’s a reason so many people have knit it.

When I started down the body of this thing last spring, I thought it might be a little big. Easy solution: have a baby!

There are about a thousand gallons of words behind that statement about image, the American culture of beauty and how it’s deeply confused, about having to get used to a new body, and all the rest of it that most of you who are female and have bodies can probably guess at. I’ll write that post someday. Suffice it to say for now that I want my little girl  to know she’s beautiful, and for her to believe that, I have to believe it of myself. And in order to make the most of that, I have to make and buy and wear clothes that fit the body I have, not the body I wish I had or used to have. And then I have to own it. 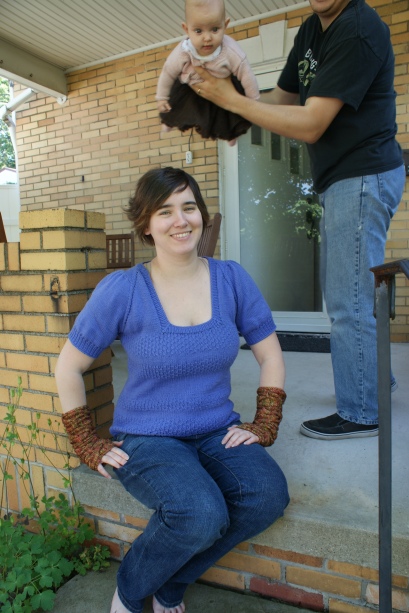 What’s left in the path of this Finishing Things Mood? An ill-conceived baby sweater, an even more ill-conceived crochet sweater for myself, a few lace cowls I designed and started in a hasty fit, and of course The Sweater. Yikes. Maybe there are reasons these things don’t get finished.