The stretch reaches its farthest point today, as what I have to say has precious little to do with knitting at all.

I decided to give up Facebook for Advent. I decided this a while ago, when I realized I was having to daily resist the temptation to post a status update every time I ate something. I was able to resist… most of the time… well, more than half the time. But even the temptation was distressing, and a serious indicator of my Facebook overuse. So I gave it up.

A few days later, this turned into giving up my MacBook for Advent. I’d been having issues with the mouse for a while, but it got to the point of downright unusability. (Clicking random things? Dragging things around without permission? Not allowing me to select more than one item without opening ALL OF THEM?! There was some serious unladylike language in relation to this problem.) It took us all of December to decide to fix the problem, acquire the part at a reasonable price, and replace it.

This ended up being a really, really, really good thing. Facebook was a temptation, but the more serious thing that was happening was an emotional tether to my laptop. It was just too easy to plop down, pop it open, and browse for a while. I was wasting a good two hours every day just in the morning, between Facebook and catching up on everything in my Google reader.

The time wastage is actually not that big a deal – I spent a lot of that regained time on the desktop I was now forced to use, playing L. A. Noire, which is awesome. This bigger deal was that being on the lappy was hurting my already meager ability to be present to the people around me, especially Jared. I could just ignore my husband when attentive kindness was called for, and for no shareable reason. And I’m sorry I have to say this, but you know in your heart that it’s true: Facebook does not count as real human interaction.

Christmas was the first official day I was allowed back on Facebook, and I forgot. The next day I got on for a few minutes, then got bored. It was like that year I gave up Farmville for Lent; when I tried to go back at the end, it just wasn’t fun anymore. I’m not sure what quirk of mine results in this pattern, but it seems like I have a combination of an addictive personality combined with one that is always looking for new experiences. So it’s easy for me to get sucked into something pointless, but it’s not really that hard for me to give up one thing to try something new. It’s no great virtue; what will be virtuous is if I can put all of these things down and really give loving, attentive, sitting-still time to the people that are put in my path to love.

On an unrelated note, I might as well give you a sweater update. New toys are awesome: Jared got a smartphone for Christmas, and the thing also functions as a mobile hotspot. So right now I am blogging to you live while we are hurtling down I-95 on the way to South Carolina. Our big mission during the pair of 9-hour drives to get us to a beloved friend’s wedding and back is to listen to all of the poetry and writings sections of the Bible on book tape. This means we have spent the last four hours listening to First and Second Chronicles. Listening to hours of Bible on book tape makes one punchy at the best of times, but the reader has some rather odd pronunciations for the endless lists of names in Chronicles. After a while I felt like I was listening to the credits on Car Talk. Some of my favorites (and he really said them like this) include Hey Dad, Be Dad, Shy Shack, Man-assy, Oh-hell, Shammy eye, Shimmy eye, Je-Funny, and MacBees-a.

ANYway, what I started out trying to say was that interminable book tape listening makes prime knitting time. So I finished the sleeves on the Hampton Cardigan somewhere mid-North-Carolina. We’re passing South of the Border now – it appears they’ve added to the giant fiberglass sombrero with a sombrero-topped interpretation of the space needle. I love that place a whole lot, considering I’ve never been there. 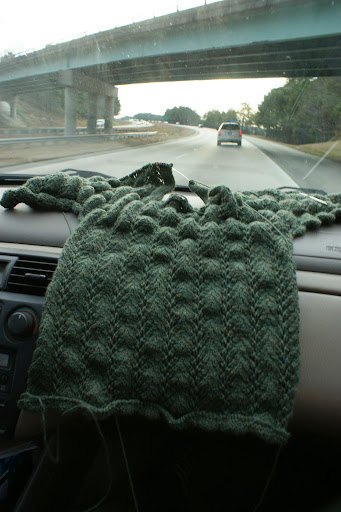 See, this is why I gave up Facebook, and why I did NOT ask for a smartphone for Christmas. The endless availability of limitless information, and the unlimited ability to spout every inanity of my life to the universe, are just too tempting for my attention-loving psyche. I know the secret to internet-based success is content, content, CONTENT! But if I never SHUT UP to think and be present and just be myself,  I’ll just be contributing to the omnipresent and oxymoronic stream of vacuous content that is the ironically named “information age.”

But South of the Border is awesome.