On the second day of Christmas, my true love got from me…

Jared and I have a tradition four years in the running now: we knit each other hats for Christmas. But, being largely practical people (as opposed to fashionable), we can only collect so many useful hats. So sometimes our hat is not a hat. We start asking each other sometime mid-October now, “what do you want for your hat this year?”

Funnily enough, this year, Jared asked for a hat.

He had no caveats, no addendums, except that it be a “thick, warm” hat. 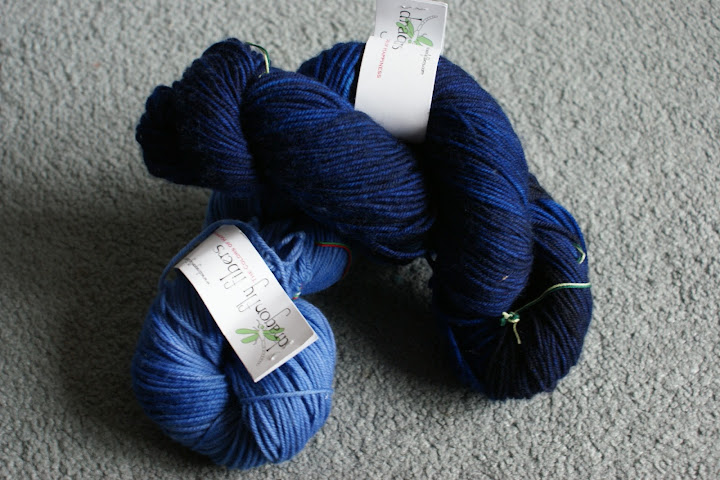 On our Black Friday adventure, I fell hard for this yarn. It’s a merino/cashmere/nylon blend, worsted weight, hand dyed by a fellow local indie dyer. I’ve had my eye on Kate’s stuff for a couple of years, and finally, I had a completely legitimate reason to up and buy it. Blue is Jared’s favorite color, and I find myself hopelessly drawn to rich, royal blues so dark they seem to want to suck you into their depths. And I needed a contrast color, so I got that other one.

I’m not sure how it happened, but I got it into my head that for Jared, “thick warm hat” meant double knitting. Double knitting is a technique whereby you create a double sided fabric, usually in two colors, with the two sides being opposite graphically. To do this, you have twice as many stitches on the needle as you’d normally need, and the stitches alternate – the first is for the outside, the second for the inside, etc. You have both of your yarns in hand all the time. For the outside stitches (or the stitches that will end up on the side facing you), you put both yarns to the back of the work and knit with the relevant strand. For the inside/other side stitches, you put both yarns to the front and purl with one of them.

This is just as tedious as it sounds. So I got clever.

The basic idea is this: with the hand you’re more comfortable purling with, hold the color that is more dominant on the inside/side facing away from you as you knit. That color will get most of the purls, and the other color in your off-hand will get most of the knits. To be fair, you will still have to purl sometimes with your off hand, but for me (with my horribly uncoordinated left hand), this was a non-threatening way to practice. You still have to switch both yarns from front to back or back to front after every stitch, but you don’t have to fuss with finding the right yarn to wrap with every time. I made a short video to give you the general idea: click here since I still can’t figure out how to functionally embed video.

*[A note if you are planning to do this – double knit always ends up at a much larger gauge than the stockinette with the same yarn and needles. It’s because every two stitches from the same side have a stitch from the other side separating them, loosening them. So if you adapt a fair isle hat pattern to double knit, be aware of this. I reduced a 6-repeat pattern to 5 repeats, and the hat was still huge, and very long. Without the brim turned up, it could function as a mask for hangings. To be fair, if I must die by hanging, I would not mind a mask this nice.]

Jared was pleased as punch with the results. I had fun teaching myself how to do double-sided ribbing and double-sided decreases. It wasn’t that hard to do, but it would be hard to explain, so for the moment I’m not gonna. Just bask in the symmetry! 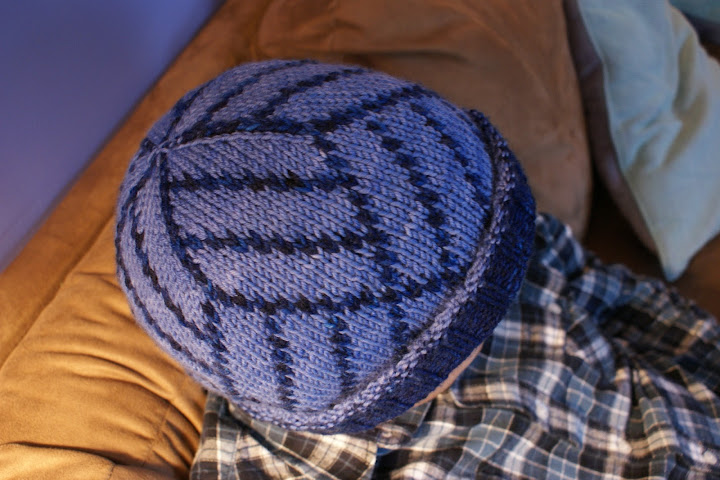 This project started out as an exercise in dutiful spousalness. Jared’s probably the only person I’d double knit for, since he’s almost the only person both who would appreciate it and whom I like well enough to suffer through double knitting. But “unventing” a new double knitting technique (though I’m sure someone has thought of this before) made the process downright fun, not to mention that it made me feel very smart. And as far as hats go, you can’t really get much more thick and warm than this.

3 thoughts on “Two Sides of Hat”