Rhode Island is the same sensory delight it always, and I have a  yarn crawl report in the works for you, but yesterday brought breaking news.

I only know what a Canadian Production Wheel is because a crew of ladies at Cloverhill Yarn Shop got obsessed with them. (And used only CPWs on their team for the MD Sheep & Wool Sheep-to-Shawl competition; hardcore.) CPWs are large wheels that came out of Canada from a variety of companies starting in the late 19th century. They have a very specific look to them, being made for fast, relatively fine spinning and not much else. That’s all I know about the history of them, except that they’ve become very popular with the revival of spinning that started in the ’70s.

Yesterday, the family trooped out to Peter Pots, the Osborn favorite local pottery-plus-antiques shop to add to our stoneware collection. I stepped out the door of the car and was confronted with a beautiful wheel sitting in the driveway, with a pricetag of 88$ that sent both my and the hubs’ jaws to the floor. It took about five seconds to realize it had all its parts and was in good working condition. By the time I got back from the bathroom I had decided to get it (how could I not?!), but my FIL had already bought it for me (there’s no way I could have married into this family on accident).

So here it is. I think it might be a CPW, as it has lots in common with the wheels I see here, though without the typical metal rod and treadle. It’s clearly well-used, by the wear on the existing treadle. The drive wheel looks to be around 30”, and gets about a 16:1 ratio on the larger whorl. When we got it back to the rental house, I threw a drive band on it (leftover merino-tencel from a vacation project) and it turns great. 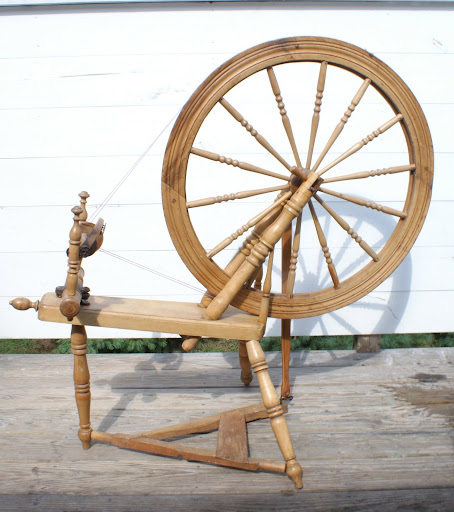 No maker’s mark whatsoever. I can use my imagination to see the shadow of one, but it looks like it’s been sanded down by someone who thought it was ugly. 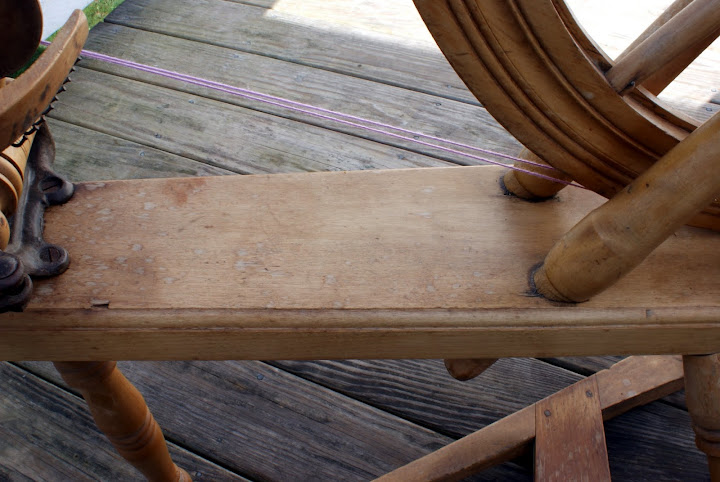 I think the entire treadle set-up is a replacement, because it’s seriously rustic compared to the rest of the woodwork. The footman is actually too long; I had to stick something under the back leg in order to spin comfortably. Lol. I might follow some advice from the CPW lovers in this group and make a new footman out of a sturdy wire hangar. 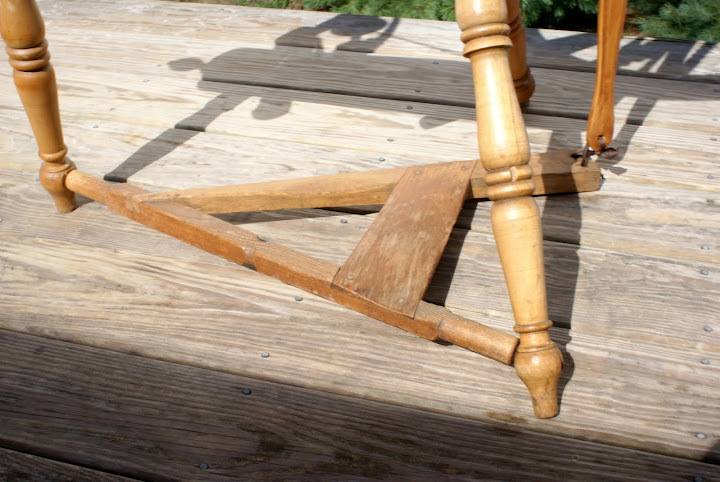 I took it for a little spin this morning It desperately needs oil, and the merino-tencel drive band isn’t doing me any favors, but even so it didn’t do badly at all. This is going to be excellent for making large quantities of yarn, methinks – hence “production” in the name. Bro-in-law will bring me some WD-40 and a wrench, and I’ve got some linen yarn I got on sale in the car, so we’ll have another go this afternoon. 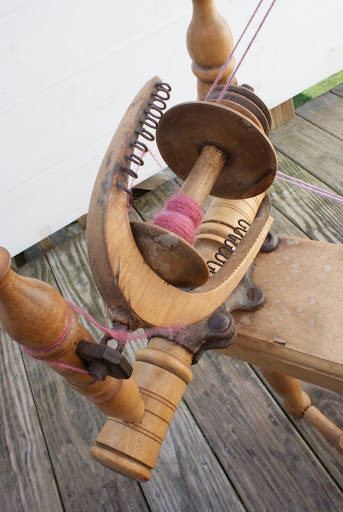 I’m waiting to hear from the CPW groupies on Ravelry about whether it’s a CPW, and how best to care for it. I don’t think I’ll have to do much to it. The drive wheel comes off quite easily, so we should be able to haul it home with us.

If you are a CPW lover, you can see the question-asking form of this post here. Advice is appreciated.

No name yet… I think we need to spend a little time together before she tells me.

One thought on “Hold the Phone”