Mr. Fricke is a foster child, staying with me to get some playtime while his mommy remodels her house and experiments with other crafts. He’s taken up residence with Blondie and Doris, and he’s already given them cause for jealousy.

This is a freakin’ full-featured wheel. The model was clearly designed by someone who had spent a lot of time at a wheel and thought about what they wanted. He’s got five speeds, from a 4.5:1 ratio to a 17:1 ratio. It’s a two-treadle castle arrangement, fairly traditional. But it’s the little things that make me fall in love. The little clamp on the side to keep the wee bottle of spinning oil for easy access. The tiny piece of velcro on the bobbins holds a leader in place. The the funky oriface that makes the thickness of spinnable yarns almost limitless. the incredibly simple extra apparatus that creates a bulky flyer. The rubber feet that keep it from sliding on any surface. And my very favorite thing:

I can just sit him in the seat and strap him in like a person! Doris is difficult to move without coming unglued into pieces everywhere, and Blondie sits very awkwardly in a way I’m pretty sure isn’t good for her. Until we get a minivan or a car with amore substantial trunk, this is the only wheel I want to take with me anywhere. 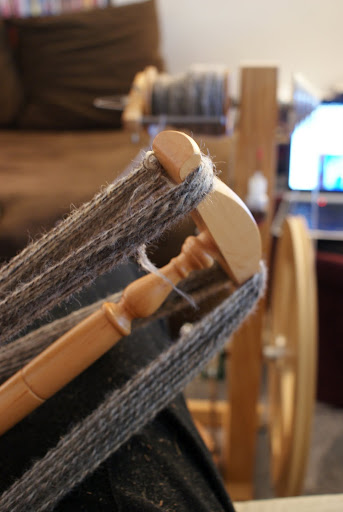 I gave him a test drive by using him for plying. I switched to the fastest ratio as soon as I could, and ended up overplying. This is partly because my singles were quite underspun; I’ve been having problems with Blondie’s drive band slipping which is in the process of being fixed, but in the meantime is darn annoying. (Also, for those in the know: I can’t really get the fastest speed on the Ashford Traditional to work. It’s because I can’t get the smallest whorl to line up with the fly wheel; the mother-of-all doesn’t slide far enough back. Has anyone else had this problem?)

So, three skeins later, I don’t think I’ve spun enough to make the shawl. It’s 13.3 oz and about 520 yards, and the pattern calls for 650. Somehow I’m helplessly optimistic that it will work out to be enough. Either way, I can’t deal with spinning any more singles for a while. I have until Saturday to determine finally if I have enough and do something about it. Crosseth thine fingers…