What would a weekend of experimentation be if we didn’t have any let-downs? I already told you about my least favorite, the color combo turning my first tailspun yarn into a bucket of weird. Mom had a doozie too.

It started with a felted, unlikeable top. It had come with her wheel when she bought it a year ago May, and she’d struggled through trying to spin with it for a year, thinking it was her lack of talent that made the process so frustrating. Not until she took a spinning class with Maggie Casey did she get some truly quality prepared wool, and learned that this top was just terribly felted.

But she didn’t throw it out. She kept it as “crap wool” for experiments.

So step 1: take carders to the stupid stuff, to make it at least usable, and spin a couple half-bobbins of singles. 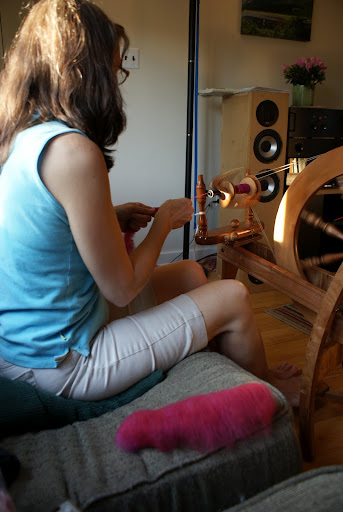 Mom’s goal was to spin this stuff called “ewelash” yarn. We both saw it in Spin Control; Mom said “ooh!” and I said “ew!” So she tried it.

The basic ideas it that you spin two fairly normal singles (one is supposed to be more energized, but we missed that part), then in plying them together, you pull out a bit of slack in one ply and let it twist into a little dongle. Mom demonstrates: 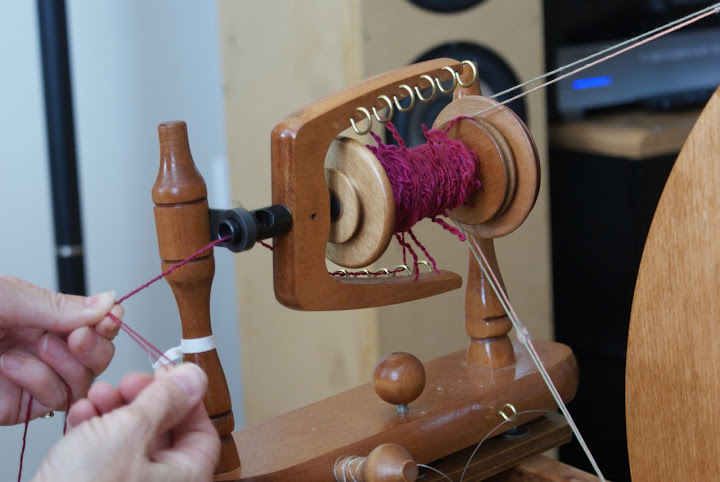 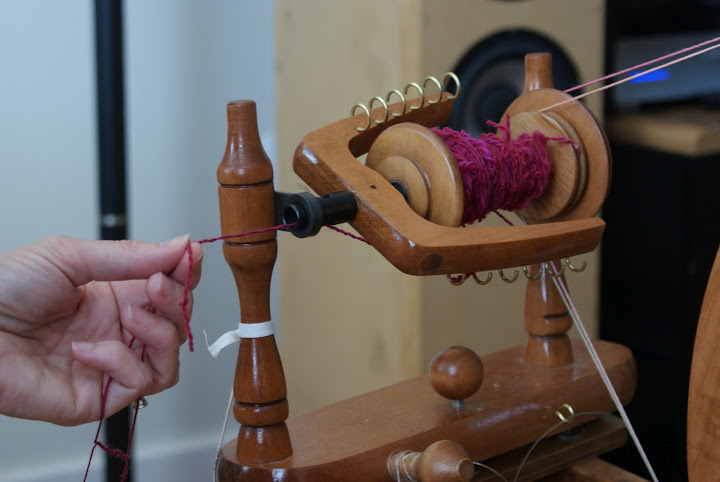 This was pretty fun. At least until, 75% through spinning, mom realized she was plying the wrong way – the same direction as the singles had been spun. Oops. She spun the last of it the correct way, commenting that it was actually more difficult to keep it even, so maybe one was really supposed to ply it the wrong way.

She stretched it off the niddy noddy,

And it relaxed to this.

All the wrongly-plied stuff scrumpled back onto itself like weird elastic pasta. Those loops hanging down are the little bit of correctly plied stuff at the end.

This yarn, a frustration from top to skein, went in the garbage with no remorse.

I also took out my frustration with my tailspun yarn on the leftover locks that wouldn’t have made good “tails.” I arranged them in some imaginary rainbow order on the cards,

combed them into a fluffy mess,

And rolled it off into a spinnable rolag. 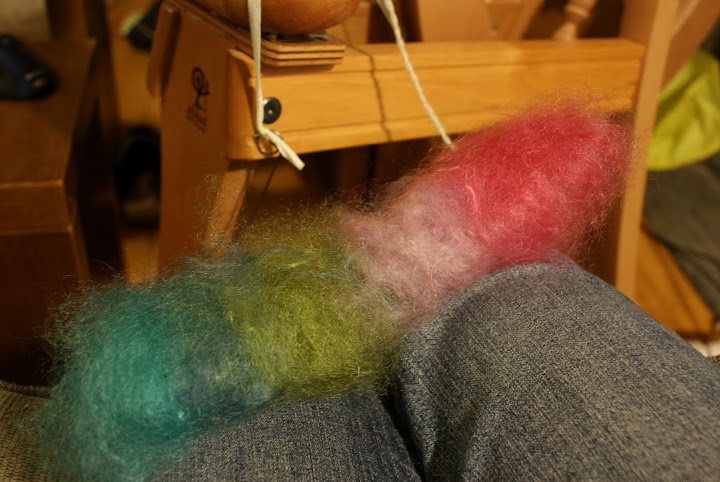 It spun into a tiny amount of singles in a few minutes, and that night I knit the energized singles into a self-striping wrist-warmer. The stuff is shockingly soft.

A weird little bit of redemption.

One thought on “Spin Retreat ’12 – Success, Failure, and Compensation”