I woke up yesterday in desperate need of a me party. A party by myself. With no guests but me, my wheel,  and a pound and a half of singles waiting to become a super-bulky 3-ply. 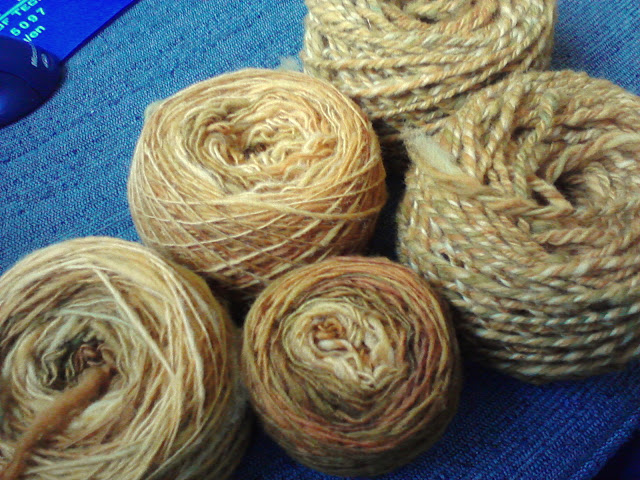 If I could spin balanced singles, this yarn evidently would be an adorably self-striping light worsted. I can’t, and I like three-ply, so off we went. It took an hour-long Doctor Who confidential and two and a half episodes of Buffy to ply it all up into a fluffy sunflower parfait.

As an aside, I had a stroke of brilliance concerning my niddy-noddy. I got points off for my handspun entries at the Maryland Sheep and Wool festival for having skeins that were too short; the entry form did clearly state that skeins had to be 2  yards in circumference. I had made skeins, and I wasn’t about to re-wind them, so I decided to let it go and take the hit. But I thought I’d have to buy a new niddy-noddy for next year. The thing is only about a foot long, so I can only make 4-foot loops going around the whole thing.

The shock and surprise of this yarn is that, despite spinning up at least 1.5 lbs of it (not that I have weighed any of it), I only have 360 yards. What? I thought I was going to have an impossible amount of wonderful super bulky, enough to make a sweater. Clearly not. I am torn between whether to make it into some sort of vesty thing, or to make a series of net-like cowls to sell. Now the trick is to keep the wheel free until our spinning retreat next weekend…

P.S. if anyone who spins would like to join us at some point, you are welcome! Mom will be here from next Thursday through Saturday, and we’ll be at the new house spinning, chatting, and probably watching movies the whole time. email me for directions.

One thought on “Fiesta de Mi”