To all my brothers and sisters of the East: Happy Easter! Christos Anesti! Χριστός Ανέστη! Христос воскрес!

This Lent, Holy Week, and Easter have been a particularly cruciform journey for me. It seems fitting then – almost too fitting to sully with words – that the second Easter pattern is a baby blanket, designed after a cross made of triquetras, a traditional symbol of the Trinity. It reminds me that, though Jesus was the one who hung on the cross, the saving work that he accomplished is the work of the whole Trinity. God is of one mind in accomplishing it, though the Father sends, the Word communicates, and the Spirit makes alive. (It’s so difficult to talk about the Trinity without saying something heretical, but I had to try.) 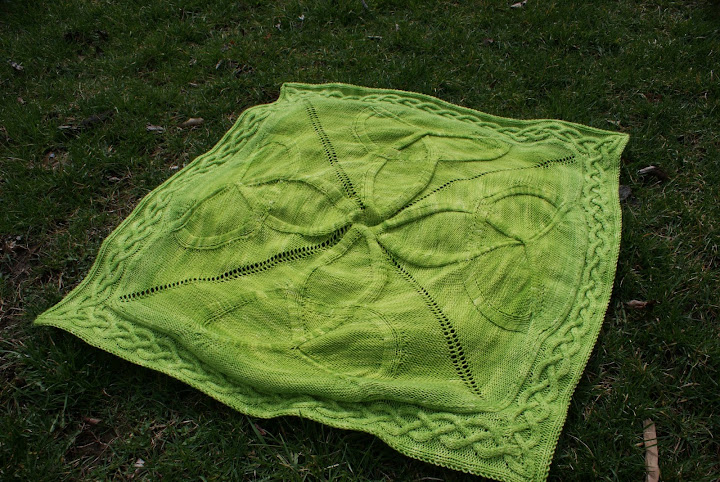 What is the point of doing the sign of the cross, of “crossing  yourself”? Some Christians never do it; some do it every chance they get. But what’s it for? Like all liturgical symbols, its meaning is too rich to pin to a particular one-to-one correspondence. But growing up in the Roman Catholic church, I always assumed that it was a seal. There is a classic praise song that comes (I think) out of the Catholic tradition, based on the Song of Songs text – “Set me as a seal upon your heart / as a seal upon your arm / for love is strong as death.” A seal or sign is something you place yourself under, for both authority and protection. It’s also a sign that we hold before us in procession, protected by the blood of Christ even as we follow him on the path of suffering, death, and resurrection. It’s an appropriate sign, I think, in which to wrap a new little Christian. 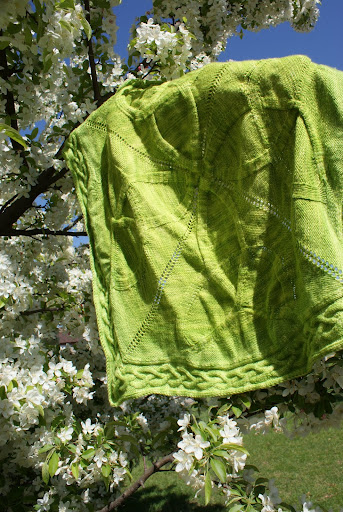 “Carolingian Cross” is a soft and bold expression of the cross, carried out in a rather unique fashion. It is knit from the center out, with YO increases at four points to make the resulting fabric into a square. The image itself is formed with simple knits, purls, increases, and decreases of various types. So far, so normal. But there are a couple of special elements which make this pattern stand out. 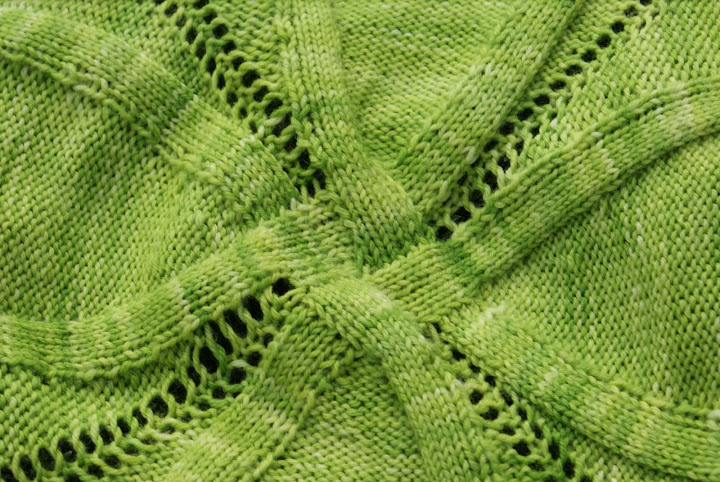 This first is the center: instead of starting with a small circle, you work a set of entrelac squares, pick up around the outside of them, and work your way out. A 2-page photo tutorial is devoted to getting you through this first step.

The second element (below) which I am very pleased with is the corners on the border – the border is a simple cable braid, but a series of short rows (easier than they look) turn them into knotwork on the corner. I am eager to apply the tricks I learned here to some even more intense knotted corners.

I pulled out all the stops on this pattern, to make sure all the unusual elements are as clearly communicated as possible. There are charts and written directions, a couple photo tutorials, a sketch, even a video on short rows that I did just for the occasion. This is a fairly advanced pattern, but more in its unconventionality than of the difficulty of doing the steps. 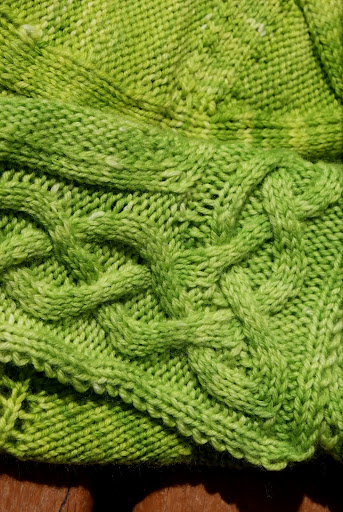 Yarn Review: I used 100% superwash merino from Sheila Rovelstad, a dyer from my old stomping grounds in Maryland. In a few weeks, I’ll be pleased to be sharing booth space with her for the third time at the 2012 Maryland Sheep & Wool festival. I used her colorway “Imagine,” which got no end of comments as I used it. It’s that perfect limeade green which cameras have trouble doing justice to. I’ve just learned that she’s moved her Wullenstudio shop to Etsy, and I believe she does custom orders. 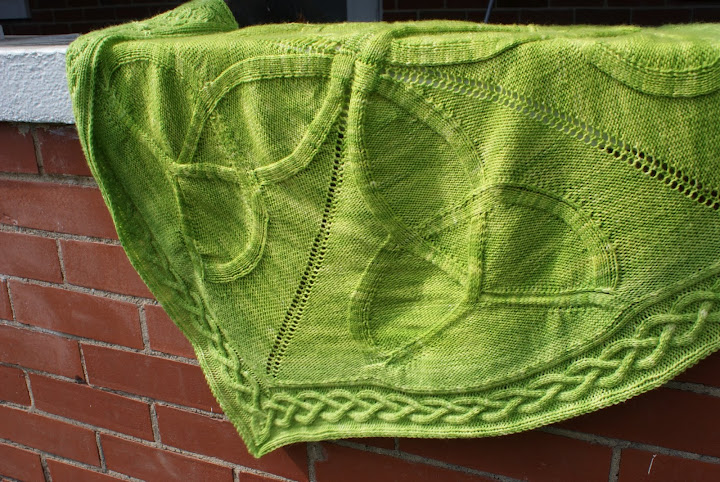 Being a hand-dyer, each of Sheila’s skeins are a little different. The “proper” thing to do, since I used 2 skeins, would have been to alternate them throughout. Instead, as the first skein ran out, I switched for a few rows before transitioning to the second. As a result, the blanket gently shifts into an ever-so-slightly cooler shade of green on the outside.

On a baby-approved wool: My discipline of celebration on Friday included hanging out with baby M while her mom got some work done. It was a beautiful day, so we went to the park to play with flowers and seedballs. Being a novice babysitter, I was afraid to give M back to her mum with a sunburn on her fuzzy pate, and this blanket (which is for another baby altogether, whose arrival is eagerly awaited) was all I had on me to cover her up a bit. M tentatively accepted this covering, though I doubt she was impressed with my short-row corners. 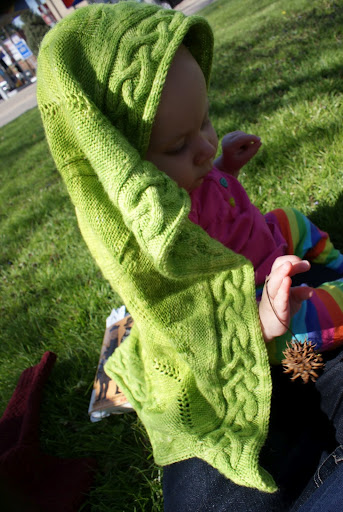 “Carolingian Cross” has been sent out to subscribers, and is alsoavailable on Ravelry for 6$.

A huge thank you to Gale and Mom, test knitters extraordinaire!

11 thoughts on “Behind the Design: Carolingian Cross”