This is Jonica’s story. We became friends while knitting the Evenstar shawl together, and bonded over our shared losses. We emailed during the ups and downs of trying and losing, and the impossible agony of waiting. I’d never wish what either of us have been through on anyone, but it meant so much to have someone to talk to who I knew understood, not just because she’d been there, but because she was there. I gave up praying for her and her husband to have a baby after a while, and learned to just ask Jesus to show them that he loves them. Imagine my surprise a short time later… 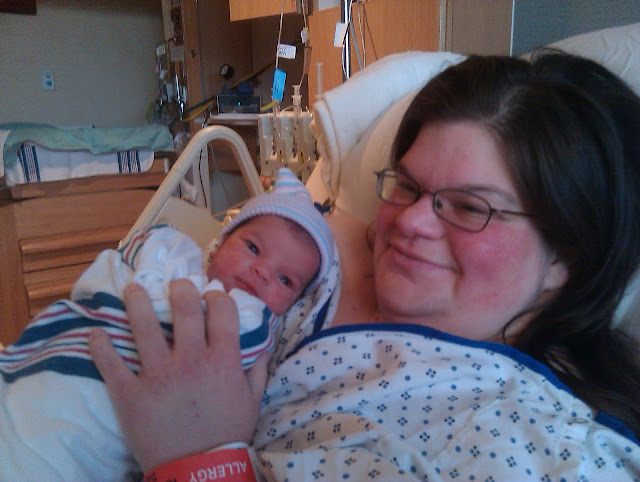 10 years ago I married a wonderful man.  We made a vow while we were dating and engaged to stay together and not seek divorce or go to other people, as our parents did when things got tough. Well, as our fathers did. We also wanted a big family. Oh, the innocence we had was amazing.

I became pregnant with our first before the health insurance kicked in, as I did not have it before we were married. I lost the first baby. The diabetes was back really bad. But, I went in to get checked up with a GYN and found out that with all my symptoms there was an underlying cause: PCOS, or polycystic ovarian syndrome. My hormones were so out of whack that they had to do several medicines to try to get them in order. In that 2 year period we lost another child. I sought counseling and so did my husband. At year five of our marriage I was so upset and angry at everyone and Heavenly Father that I left for a year to get myself straight. I had to. I was taking my anger and frustration out on my husband, my family and my friends. It was the best thing I ever did. Husband and I talked for that year on emails and phone. We did not make plans, and we found out alot about ourselves and our marriage.

When I came home, I was 150 pounds lighter. I was ready to go again. I lost another child. At this point I gave up some. I was not as angry as I was before, but I was still seeking help. I refused to give up hope of us becoming a bigger family. I asked Heavenly Father for one little miracle. Just one. Even if I did not deserve it. I went to the temple, kept my faith and covenents. Kept trying naturally.

Finally, in desperation, my husband said, let’s try what the GYN is talking about. I did 6 rounds of fertility treatments with hormone pills. At month six, we had given up. We were at the breaking point, and I just couldnt do anymore. There was nothing left of me to give. The anger slowly crept in, then the absolute heartbreak of failure. I threw out all the temperature charts, and aganist my better judgement we went out to celebrate his birthday.  Came home a bit unsteady and drunk. And it happened. BUT…..

I had another problem in late march 2 years ago: my youngest sister gave birth to a little boy. I was not in a good place. I was upset with the idea that my 18 year old sister was having a baby! But, when he was placed in my arms I fell in love. That may have been the turning point that year. I was so in love with my nephew and had so much happiness that I did not think about my lost children! For the first time in a long time I was able to hold an infant. I was able to shower him with kisses and love that I had shunned. Before, when someone handed me a baby in church, I looked at them like they were the spawn of Satan! Eventually, the ladies gave up handing me babies. Older kids I was fine with. But, with my nephew I was able to heal some. I was able to look at a baby in a different light. I know Rebbie was there through all of this, as we both were dealing with the miscarriages at the same time. There are some things only women can understand, so my husband let me spend what time and money and effort in my knitting and the dogs so that way I could be able to go on.

Then, in March and April of 2011, Marme had 3 strokes back to back. I thought it was the stress from that. That was the reason why I was so sick and so tired. As you can see, it took me quite a while to even get the courage to pee on a stick or get the blood test done. In the middle of May my sister dragged me physically to the medical office and had them do the test for me. The most excruciating 24 hours followed. The test was postive.

Now, to tell my husband. I spent that day downtown with my sister and mom at the house, and was so tired when I got home that I fell into bed next to my husband and just went to sleep. At this point in time I was 9 weeks along and so tired. That morning he woke me up and asked me point blank, “What is wrong?” I told him I was pregnant, and that he should take Friday off as it will be the confirmation ultrasound. Then he promptly threw up on his shoes as he was blocking the way to the bathroom. Oooooops.

It took me 6 months to really believe I was having a child.  It was not easy to accept that she would be here.  And my husband was not able to really believe it, as there were too many miscarriages. I gave birth 3 weeks early in an emergency cesarian. She is here and so sweet and small. I still struggle to believe she is mine and my husband’s. It will take time for us to really believe that we were given this chance. 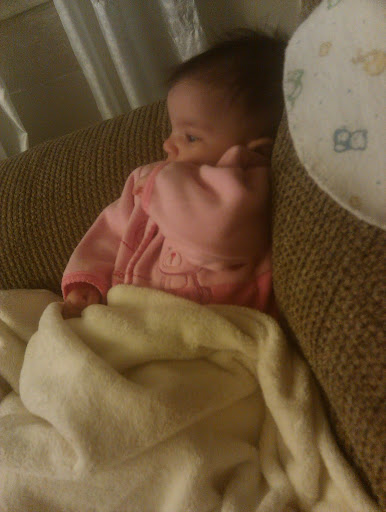 So, for those of us struggling with fertility issues, I am finding that even if successful pregnancy happens and then the birth … it still has the emotional toll on us, even more so than for a normal person who can become pregnant on their own. I think in a way I appreciate the chance more; I fell in love with my child as soon as she was on the screen. I did not want to dare to believe because I became so used to disappointment, so used to the heart-wrenching guilt that I am the one at fault for losing the child. That was the worst. And for little K to be born so fast and so healthy … it is still a shock. I still struggle with the emotions and guilt; I do not think I will ever not struggle that way. but with K … I can hope …