Jesus has so many names, it is hard to keep track. By the end of the Lord of the Rings trilogy, Aragorn had so many names that I was quite confused, and he had only lived for eight-some years and just become king! In a fictional context like that, I learned that titles don’t have to be honorifics used by sycophants. These were names earned with mighty deeds, or inherited through a mighty lineage, or pointing toward a mighty destiny. So you can imagine that Jesus, the incarnate Word, God made flesh, would have accumulated a few meaningful titles in the two thousand years since he came to walk on this earth.

When I began designing a sock for Epiphany, I only intended to capture an image of the Star of Bethlehem. If Epiphany makes me think of one thing, it’s the Maji, following the star to the stable to worship a baby. I remember when I first learned that astronomers can not only predict the movements of the stars and plants, but trace them backwards, and that they had figured out that the Star of Bethlehem was probably an actual conjunction of the planets around 4 B.C. 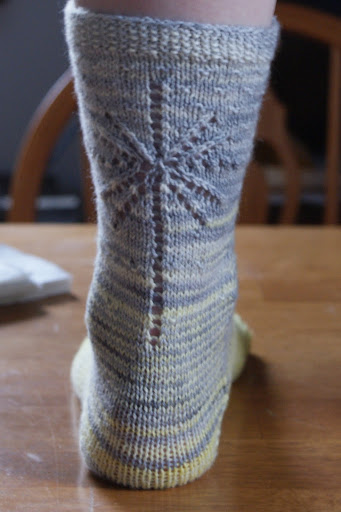 But if there’s one thing knitting gives you, it’s time to think. And as I graphed and designed this star, I kept thinking not of the Star of Bethlehem, but of the fact that Jesus is called the Bright and Morning Star, and the Sun of Righteousness. That the mystery of the incarnation is that God himself, who had to shield Moses from his glory because seeing him face to face, who would outshine any star because he created every one and knows them each by name, became one of us. Not just because it was humbling and touching or poetic – he became one of us to show himself to us, to give himself to us, to show us who God is in person.

It was out of this meditation that the toe was designed. I elected to use Unique Sheep’s Gradiance yarn because I to show a transition from a starry night on the leg to the sunrise at the toe. 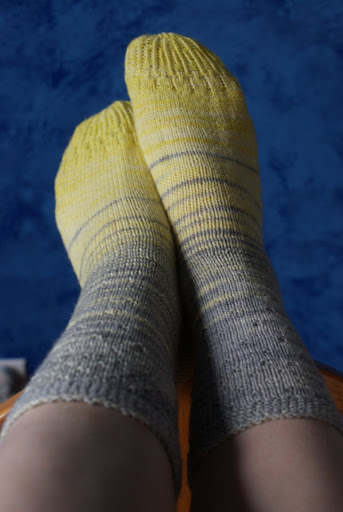 Over the next few weeks, I might pop out with some unscheduled meditations on Christmas and Epiphany. There’s so much to dwell on in this season, which we tend to reduce to the 25th December and a bucketload of commercialism and sentiment. The church calendar gives us until Ash Wednesday to chew on these mysteries, so chew I shall.

Christ is our light, but he came into a very dark place. As Bishop Martin Minns discussed when he came to visit Trinity a few weeks ago, it was utterly appropriate that Christians began celebrating the incarnation on the Pagan solstice. The darkness is terrifying, even though we can now ignore it utterly with electric light. When the days finally started to get longer, ancient peoples would breathe a collective sigh of relief – even though a long winter was still ahead, the sun’s increasing light promised it would end. The arrival of Christ on earth was exactly that beginning of a new thing, that even though many trials still lie between us and the final kingdom of heaven, the Sun of Righteousness promised us it would come.

Christ, whose glory fills the skies,
Christ, the true, the only Light,
Sun of Righteousness, arise,
Triumph o’er the shades of night;
Dayspring from on high, be near;
Day-star, in my heart appear.

Dark and cheerless is the morn
Unaccompanied by Thee;
Joyless is the day’s return
Till Thy mercy’s beams I see;
Till they inward light impart,
Glad my eyes, and warm my heart.

Visit then this soul of mine,
Pierce the gloom of sin and grief;
Fill me, Radiancy divine,
Scatter all my unbelief;
More and more Thyself display,
Shining to the perfect day. 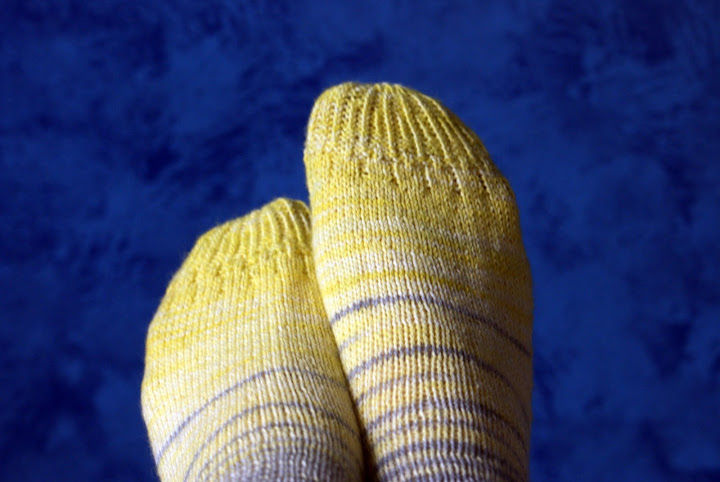 2 thoughts on “Behind the Design: Morning Star”