Today’s post comes late because the knitted gift in question had to be not only gifted, but… finished. It was knit almost entirely during the Doctor Who Christmas special, “The Doctor, the Widow, and the Wardrobe.” (Just for good measure, it was stuffed and assembled while watching the new Star Trek movie.) I liked it, though it seemed a little spastic watching it on actual TV with actual commercial breaks. The Narnia allusions were very clever, but didn’t go much past what was shown the trailer. It was visually and dialogically stunning, and I am continuously shocked and amazed by Steven Moffat’s capacity to write endings where everyone doesn’t die and no one is depressed. I am more or less reconciled to Matt Smith, and plan on getting season 6 from Amazon instant as soon as I have a free weekend. In other words, March. But I digress. The gift in question was… 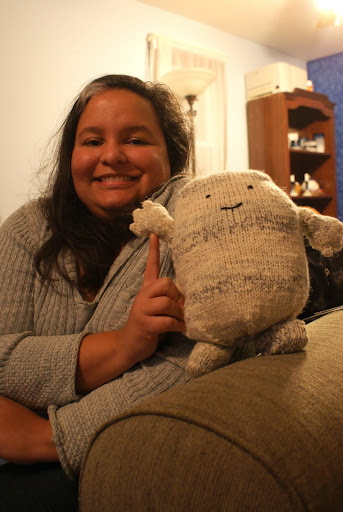 A baby Adipose for Roommate A, who is personally responsible for my televised obsession. If you don’t know what an Adipose is, find a way to watch “Partners in Crime” post haste, and you will want one too. It’s the first of the fourth revived season, during the tenure of the Tenth doctor (hence the title of this post), who will always be my doctor.

The pattern was right out of my head, an enjoyable conjunction of random bits of knowledge. I could have bought her one off thinkgeek, but I was poor,  and had the perfect yarn sitting right off my shelf. He’s knit top down, with a start much like that of the Pileable pups; his arms were made with thumb gussets; his bottom was borrowed from the top of a fair isle hat, and his feet, are more or less baby booties. The rest of him was a little math, figured out by holding a tape measure up to a screenshot of the character.

In related news, Jared got the Best Present Ever from his brother: 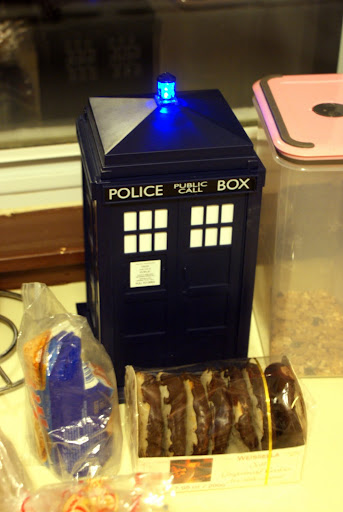 I know, right?! It even lights up and makes the sound when you go for a cookie. Right now it is stocked with chocolate-covered raisins and non-pariels.