Remember when I was knitting these random things? They are not, in fact, slippers for Dufflepuds (though Roommate A insists I should not be prejudiced against Dufflepuds and that knitting slippers for them is a fine and noble calling. Personally, I do not think I could knit anything for someone I found so annoying). 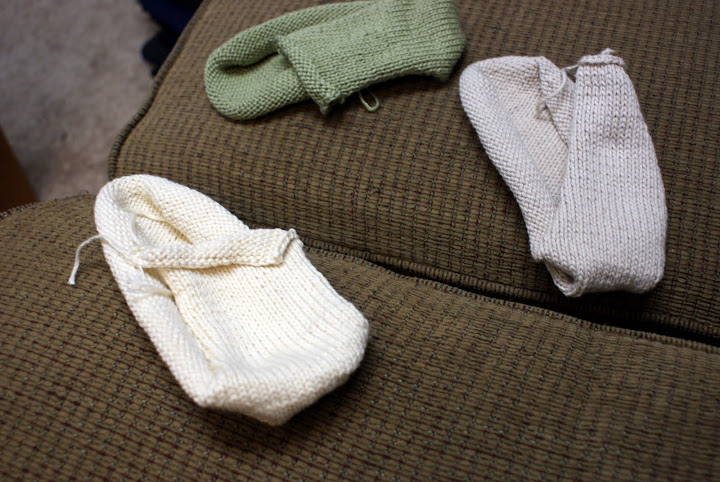 They are, instead, Pups! To be honest, they are more stuffed rectangles with odd appendages arranged so as to create the suggestion of caninehood. But the reason for their geometry is very important: 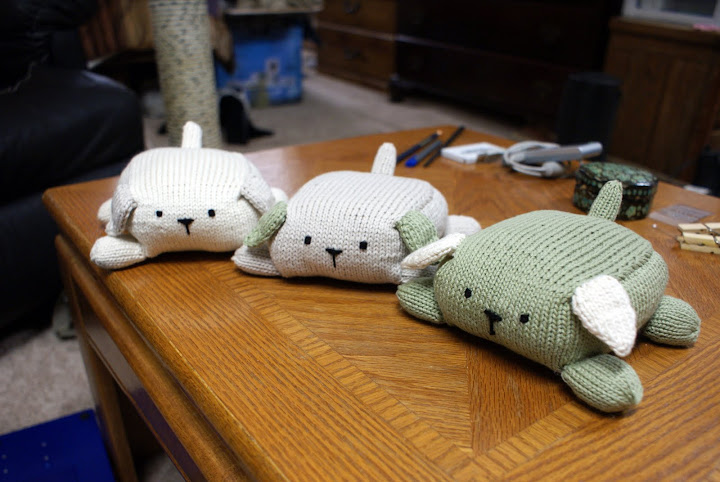 It means they can stack!! 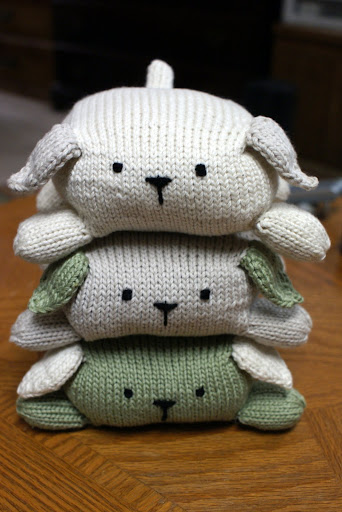 That’s right, these are the Pileable Pups by Anna Hrachovek of Mochimochiland. I’ve been admiring her work for a while, and have been particularly looking for an excuse to knit Rainycloud. So when Mum told me that Bethany had been eyeing the Pileable Pups on display at Cloverhill Yarn Shop, I caved.

Pattern review: This pattern is extremely clear, which I really appreciate, as someone who has not knit many (any?) stuffed objects. She’s very exact on how to make the embroidered face, which is of course key to cuteness. Mattress stitch is very important. I did change the ears ever so slightly so they were properly symmetrical, but that hardly matters.

Bit by the toy bug, I decided to make little stuffed objects for my nephews as well. 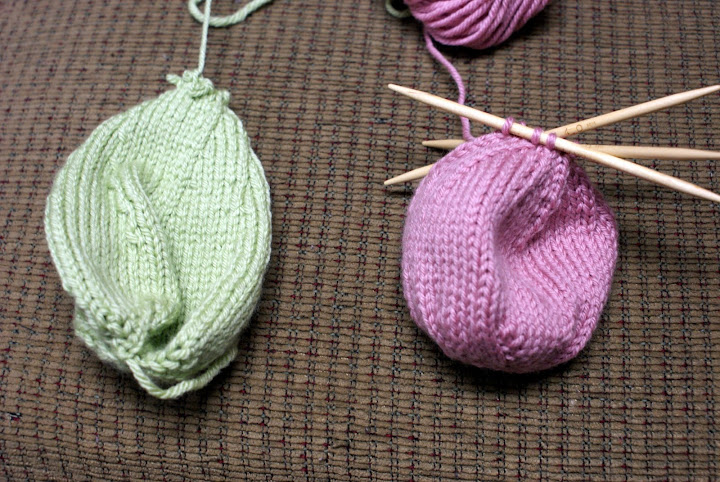 These sad sacks were going to be an Elefante and a Grumpasaurus, two patterns that make me go *squee* with cuteness, but they were doomed to failure when I ran out of yarn. I contemplated making Elefante into a body-only-head object, trumping up some kind of trunk, and making the Grumpasaurus’ tail out of a different color. But eventually I accepted defeat and did what I had really been wanting to do all along: cast on another set of pups. (They’re all knit out of Tahki/Stacy Charles Cotton Classic, if you want to know.) 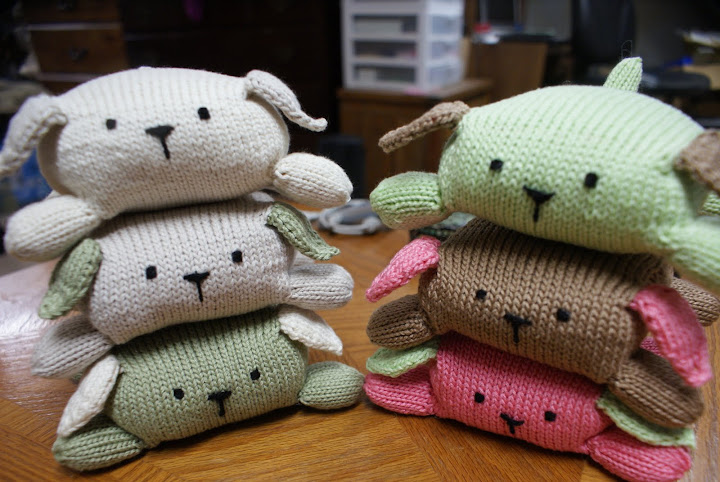 (Caving to gender stereotypes, I reassigned the first set to the boys and gave the set involving pink to my sister. But no one says the pink pup has to be the girl [or the only girl] in the band.) When the Christmas deadlines got really bad, it was that second set of pups that had me pulling close to an all-nighter. But it was worth it (and I got a book read for my Jan term while knitting the pink components). They were received with joy and little happy noises (largely among the adults). I suffered a bad bout of camnesia with the nephews, but I caught my sister as she immediately put the pups to their proper use: 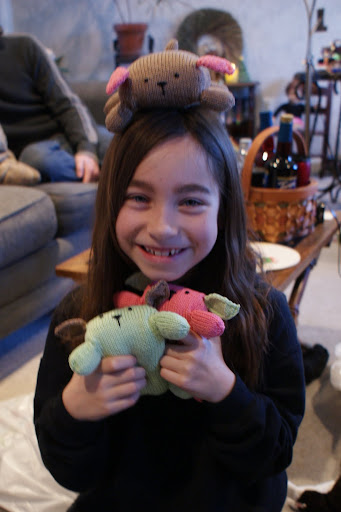 In the spirit of Go, Dog, Go, the first book I remember reading: 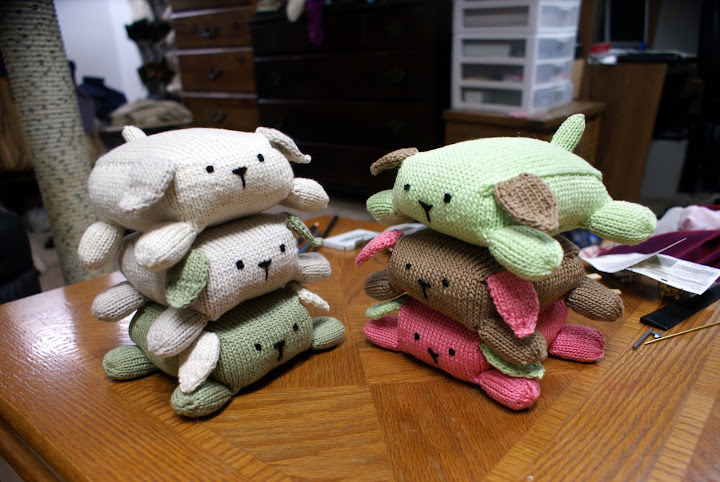 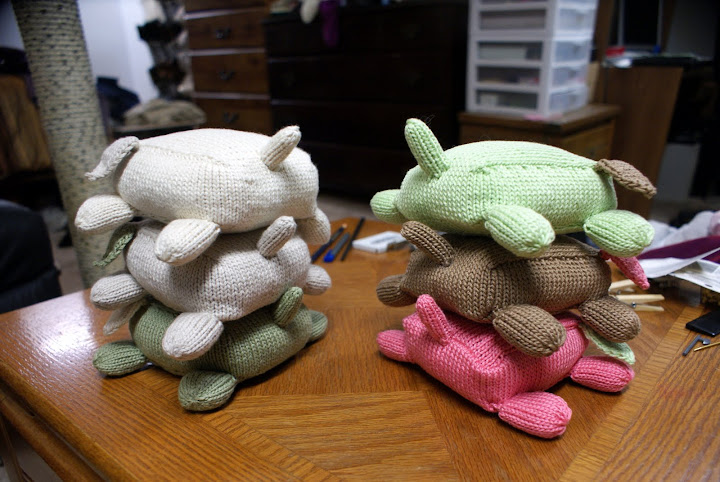