It‘s happening. This is the third Christmas that I’ve been a pretty serious knitter, and up to this point I’ve managed to avoid It. But this year, It snuck up on me, which is of course the only way It happens.

It, simply put, is when Christmas makes a knitter crazy. When they find themselves boxed into a corner with more knitting to do than time allows, and he or she loses all coherence and sanity in the final days of Advent, working feverishly late into the night.

The thing is, it’s not really the knitting that’s got me. I could handle it if it was just the knitting. It’s the fact that Christmas comes at a highly inconvenient time of year. I would strongly advocate moving it to, say, July, when I’ve got nothing else going on.

I’ve got a plan. I’ve got a carefully organized to-do list, with nearly every moment scheduled between now and going home on Friday. The knitting, the papers, the exam, the ravelry ads, the blog essays, the pattern editing, the pattern writing, the wrapping, and the Christmas cards will all be sorted. Emergency measures have been deployed: The list of delay-able presents is made, The Husband is being delegated various duties (like cooking and cleaning; left to my own devices I would live in a pile of mess and eat peanut butter. This is not really okay with him, so he has Food and Anti-Squalor duty).

In the meantime, I’m going to take a few minutes to celebrate my successes. I have actually gotten some Christmassy things done well ahead of time.

The lovely Alyssa, for whose husband I made a stocking last year, had a smaller job for me this year. My mission: replace the name “Abby” with “Abigail” on an already-made stocking. No big, thought I – I cleverly picked out one half of the offending section, re-knit a name, and sewed it carefully to the other side. 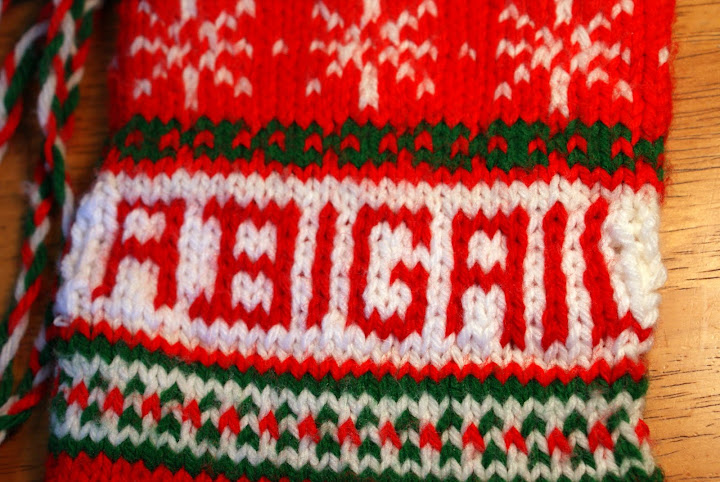 I actually did this back in November. The problem is, I wasn’t paying 100% attention to my instructions, or I would have noticed – “Abigail” was supposed to go on the other side. Like, the front side. Right.

How does one do such a thing? Easy. Decapitate the stocking: 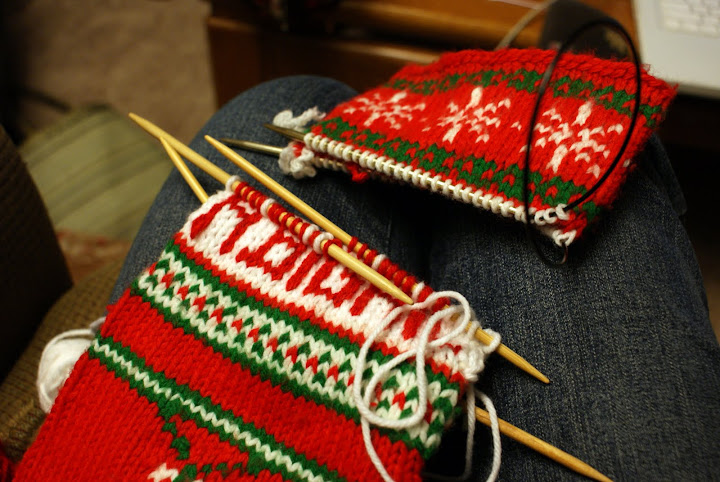 Knit new names (this time on the correct sides), and do some epic grafting to put it all back together. I’m actually glad for the chance to re-do it; I’m much happier with how it looks now. The seams were a little wonky before. 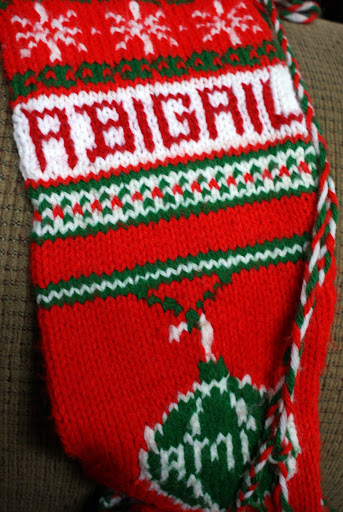 Okay, so the final month in my self-imposed sock club isn’t going so well. This yarn was supposed to turn into two socks before Christmas: 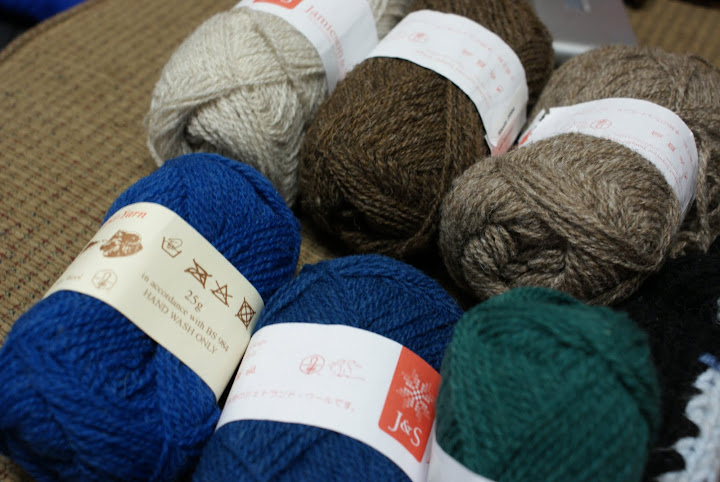 And right now it is one sock. This is a little disheartening. But when I stop and think about it, that’s 17 and a half pairs of socks I’ve knit in a year and a half. Plus there were at least two extra pairs thrown in for non-club purposes. Even if the recipient of these socks has to open a box with only one sock in it, I have every right to feel pretty flippin’ accomplished this year.

#3 I made egg nog. This is a Christmas tradition I started for myself, and I decided that without nog, it wouldn’t feel like Christmas. So last night I took half an hour and mixed eggs and liquor by hand, and it’ll mature in the closet ’till Epiphany. HA. 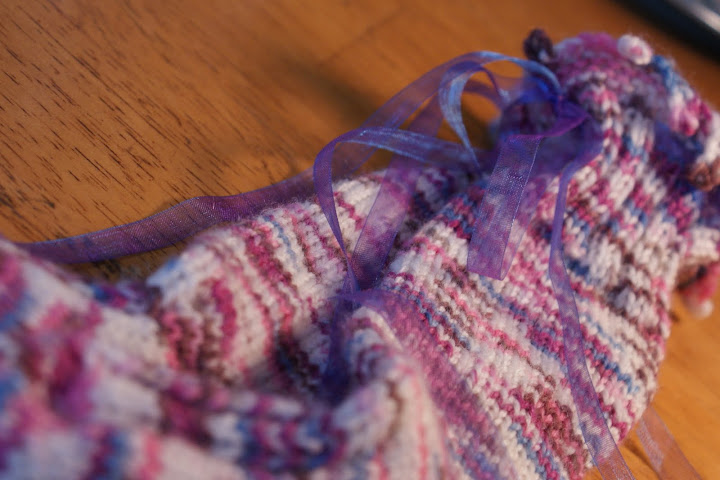 This is a happy story, not about successful wee stockings, but about a successful wee baby. I had the honor of making these little leg-warmers for a tiny person whose parents waited longer than I can imagine to meet her. As hard as it is to go through kid-related struggles, when a friend who has suffered right along with you gets a happy ending to a hard battle, it’s impossible not to be overjoyed. Congrats Jonica & Howard on your gorgeous new babe, and I look forward to meeting Kaitlin.

See? Now I have no right to flip out about festive stationary. Perspective, Rebecca. I’m still going to get about 12 hours of sleep between now and Christmas, but I’m going to have perspective about it. …Right.