As weird as my obsessive hobbies are, I’m sure you’d agree that they’re a pretty good way to keep a handle on an addictive personality. Notice how I’ve never done drugs? But sometimes I get on these jags… these obsessive little spats where a task just takes over until it’s done because they’re so wonderful. One of the is Doctor Who. I’ve been watching it so much that, walking through my neighborhood on an ominously blustery day, I half expect to hear the Tardis arrive. And I’ve made that jump where the Tardis’s horrible wheeze, which sounds for all the world like a misaligned timing belt, is to me “the sound of the universe.” If any appliance in our home ever starts making that noise, it will never be fixed.

My other obsession is this pretty thing: 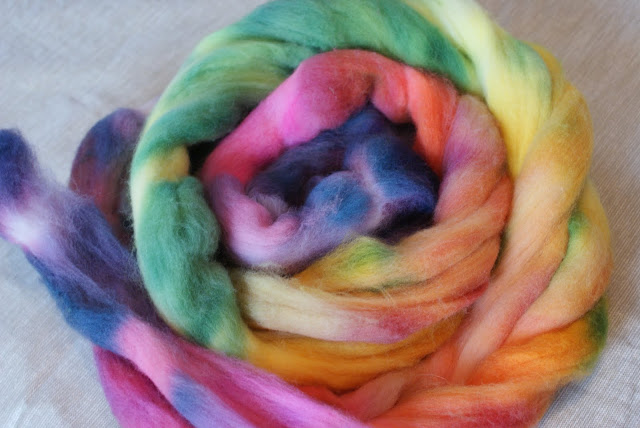 I bought this roving at the 2010 Sheep & Wool Festival. It’s butter-soft Targee Wool, dyed by Koigu, about 4 oz. It starts with this dark blue, then goes through the rainbow to green at the middle, then the colors reverse on the way to the other end.

I had a grand plan for this bit of top. I thought I would take the whole thing, split it down the middle, and spin them up into two stretches of color, then teach myself to navaho ply so I could preserve the color sequence. That way, I’d have two wee skeins of yarn, just enough to make matching rainbow socks. Gorgeous, right?

But when I untied the roving, I found not one long braid, but three slivers, all dyed in this sequence. My plan could have worked if it was two slivers, but not three. Not knowing what to do, I split these three again, so i now have six lengths. I guessed I could spin them all up individually, ply three and three together, and still end up with something like my original product. But the color runs aren’t going to be exactly identical between the three, so it just won’t be the same. So what should I do? Ply them together and attempt to salvage the sock plan, or do something completely different… perhaps still navaho ply them, and make myself a scarf or something that oscillates between ends of the rainbow?

Anyway, while watching a whole season of David Tennant over the last 36 hours, I’ve done four and a half of the six slivers. I find it goes much more smoothly if I pre-draft the whole thing first. Which, of course, gives me the excuse to store the pre-drafted stuff in the form of a rainbow tribble. 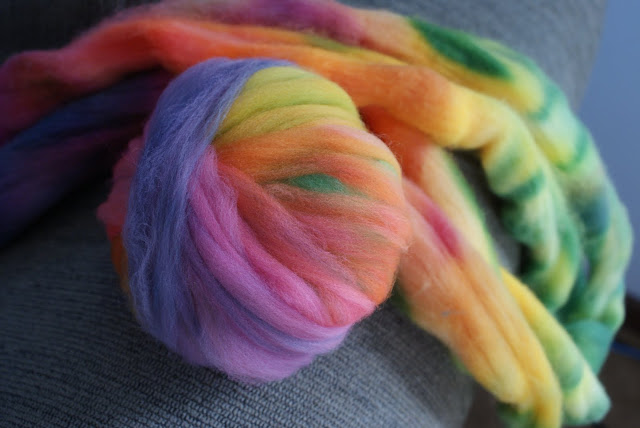 Can’t you just taste the rainbow? 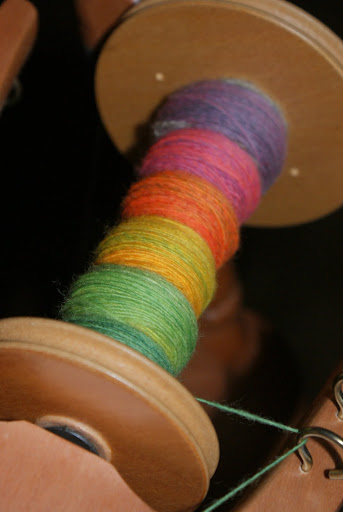