For some reason, I keep telling myself that I like finishing. “Weaving in ends is satisfying!” I say to customers, colleagues, students and friends, with a genuine and optimistic smile. “After working so hard on something, weaving in the ends just right is really a treat, and blocking evens out your stitches so nicely and makes your work look so professional. I just love it.”

But it’s all lies. At least the part about me liking it. That’s what I realized this week, after the second time I let a pile of finished items stack up, complete except for ends-weaving and blocking. That’s what I do with tasks I don’t like: I let a pile accumulate until it’s intolerable, then I get it over with in a big batch. I just honestly didn’t know that’s what I was doing with finishing.

So I had another little blocking party this week: two pairs of socks and two cowls spent thirty-six hours stretched prone before a fan in the humid basement. One pair of socks you’ve seen already; the other I am almost ready to show you. Today: cowls. 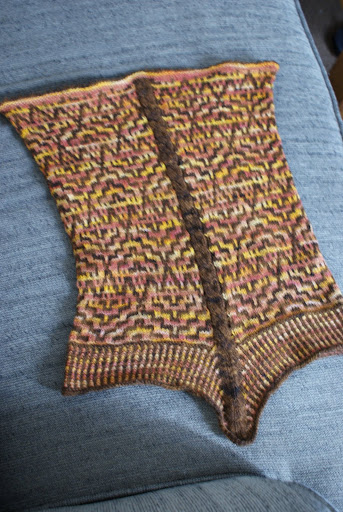 Sorry about the blurry photo, but this is the finished Balrog cowl. I think it’s just super, even though it’s possibly the weirdest thing I’ve ever put around my neck. I feel so creepy wearing it. (I will apologize for the weird looks on my face in these pictures; I cannot apologize for my enormous forehead. Blame my father.) 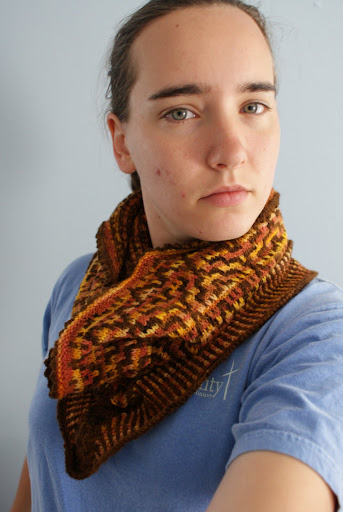 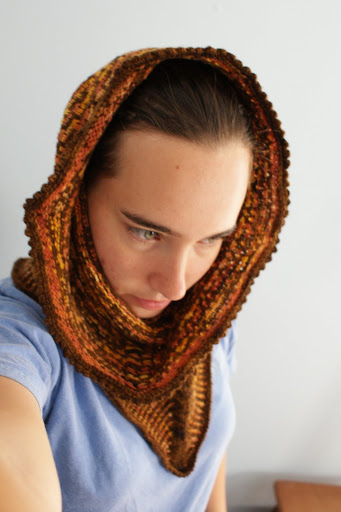 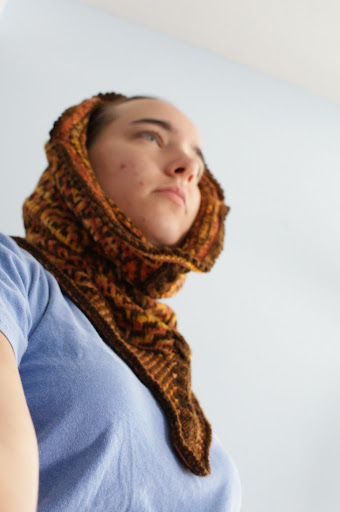 Pattern review: This project took my mosaic knitting virginity. Mosaic knitting is pretty cool; it’s about half as hard as fair isle, but it takes twice as long, so I don’t necessarily prefer it. But, due to its limitations, it makes very neat print/graphic-looking patterns. Susan did a super job, as always. I don’t know how long she usually takes after the test knitting phase, but I expect it will be out soon. 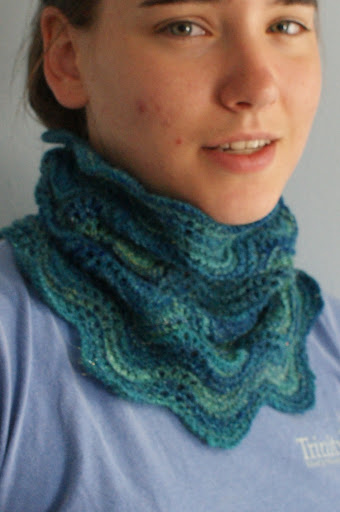 I also finally blocked my handspun cowl. There’s not much to say about it – 8 repeats of the classic Old Shale/Feather and Fan, straight out of Barbara Walker Volume 1. I used US 4s. I didn’t have to do much – just wet it and let it dry flat. It didn’t need much of a blocking, but blocked it anyway – because it did give it that crisp finish, and made the little scallops stop curling. And because even though I [not so] secretly don’t actually like it, I block everything. It’s the principle of the thing.