If you are overwhelmed with a house full of half-unpacked boxes, broken appliances, and ever-increasing piles of crap, there is no better solution than to just leave. We were gone last weekend, and now we’re absenting ourselves for a whole week. Tomorrow myself, my spouse, housemate A, and buddy from college are all trekking to O CANADA for a week.

I’ve been Canada-curious for over two years now, ever since I started fastidiously reading the Yarn Harlot’s Torontonian blogitations. Finally, I will get a little glimpse, spending some time in the wilderness of Ontario, with a brief fly-by of Toronto in the process. I’ve picked a couple famous sheep farms to visit: Shelridge Farm in Durham (mummy’s going to be so jealous!) and Philosopher’s Wool in Inverhuron. I can’t go to Toronto without at least stopping by the YH’s LYS, Lettuce Knit. But I am NOT a creepy stalker (and I’m actually terrified of meeting the YH in person, as I’m sure I would have nothing useful to say and would just gush like an idiot, and we would not become BFFs like I’d always dreamed), so we will not be making the 4-hour drive back to Toronto for the Lettuce Knit stitch-n-bitch. I plan on giving them as much of my money as possible in exchange for colorful string. We can eat potatoes next month.

Most of my time has been spent in preparations to leave a half-assembled house for a week, so I’ve little of interest to show you knitting wise. But here’s my day in pictures all the same. 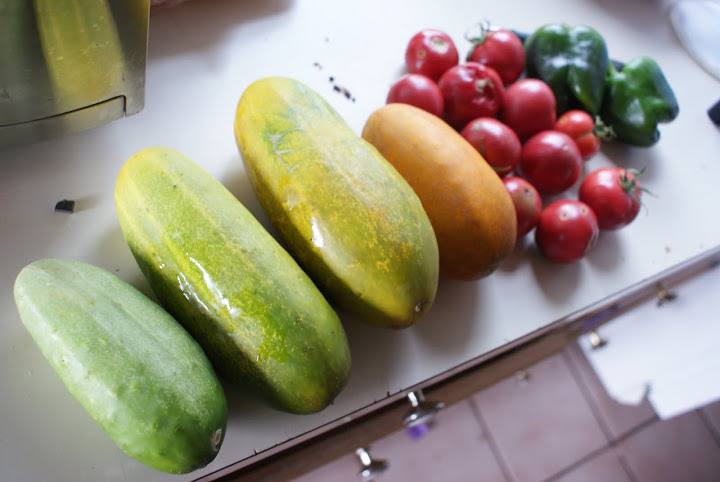 From our backyard garden, a rainbow of pickling cucumbers, which I didn’t even know were out there, in various stages of overripeness. If we can get on our a-game, these will be dill pickles before the night is out. The delicious cherry tomatoes and wee bell peppers are from the community garden; the latter will come to Canada with us to become part of Osborn family recipe sloppy joes, and the former will be compulsively eaten before we leave. 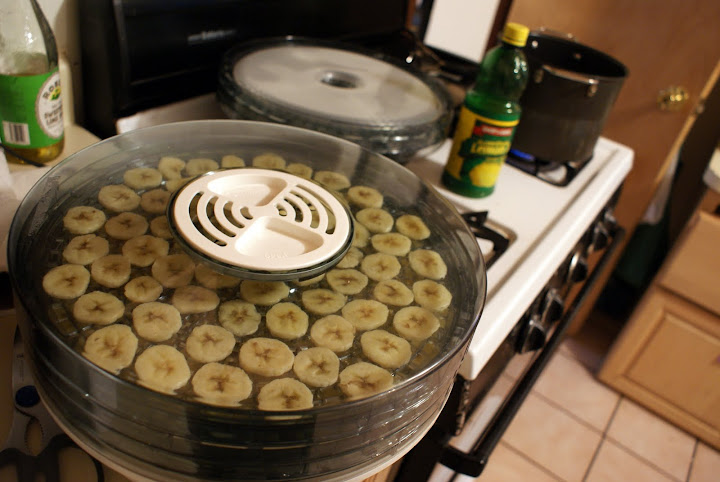 Various types of dried fructose in process. I have a thing for banana chips, though I’ve never tried to make them before, so this is a little risky to try the eve before departure. In the background is the less risky pot full of stuff that will become blueberry fruit leather before we leave. At least I’ve cooked that before, eh?

(Wasn’t that a convincing use of the word “eh”? I’ve been practicing.) 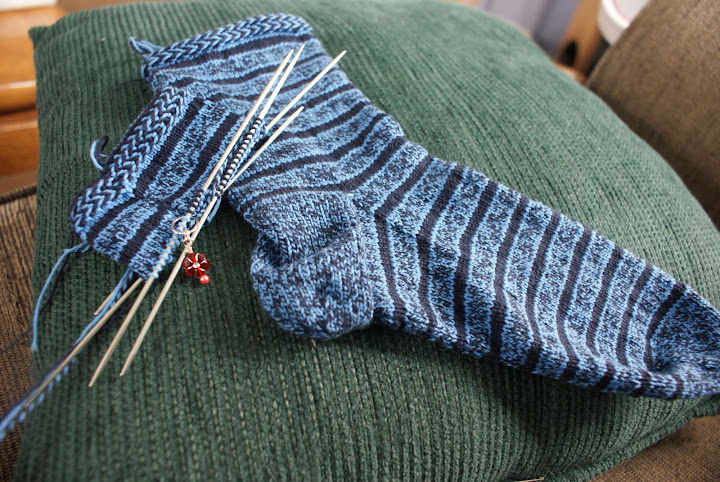 Finally, significant progress has been made on August’s socks of the customized marled cotton. I love the look of the fabric, and the cotton’s not even that hateful to work with (though it’s definitely “not my favorite,” as mum used to make us say of vegetables we disliked). However, I have not completely memorized the exact shape of Jared’s foot, and this cotton fabric is inflexible enough that this might be a problem. He can get the thing on, with some difficulty, and it doesn’t cause him physical pain to wear, but it doesn’t fit well enough to be worth the work I put into the yarn. I’m currently working on a way to improve it that doesn’t involve knitting the entire sock. I would have to re-knit the foot at least, as it’s too narrow, but I might be able to just pick out the cast on and give it a more flexible edge. By the time I come back, I hope I have an answer to this puzzle… or a decision to let them be socks of enormous effort and poor fit. 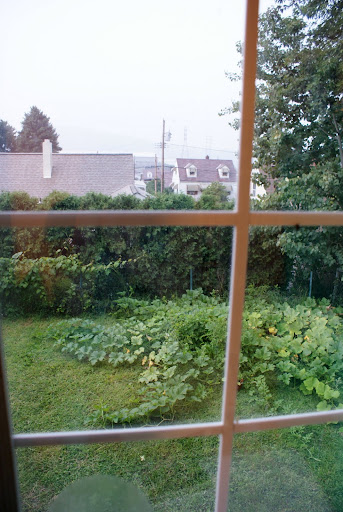 It’s been raining sheep and llamas all day today, and housemate A and I have been fretting about hail on our garden. But our destination’s forecast is 75 degrees and sunny. Just need to pick up something to fend off the black flies, and we’ll be prepared.