After my griping and moaning in last post, I realized I just needed to have a go at mending Ns leggings. I’ve mended her leggings before with creative reinforced darns, but they always tore again right away. Or she grew a couple inches and a new knee wore out.

This time I decided to go “Full Rodabaugh” and do a large double patch to see if it made a difference. 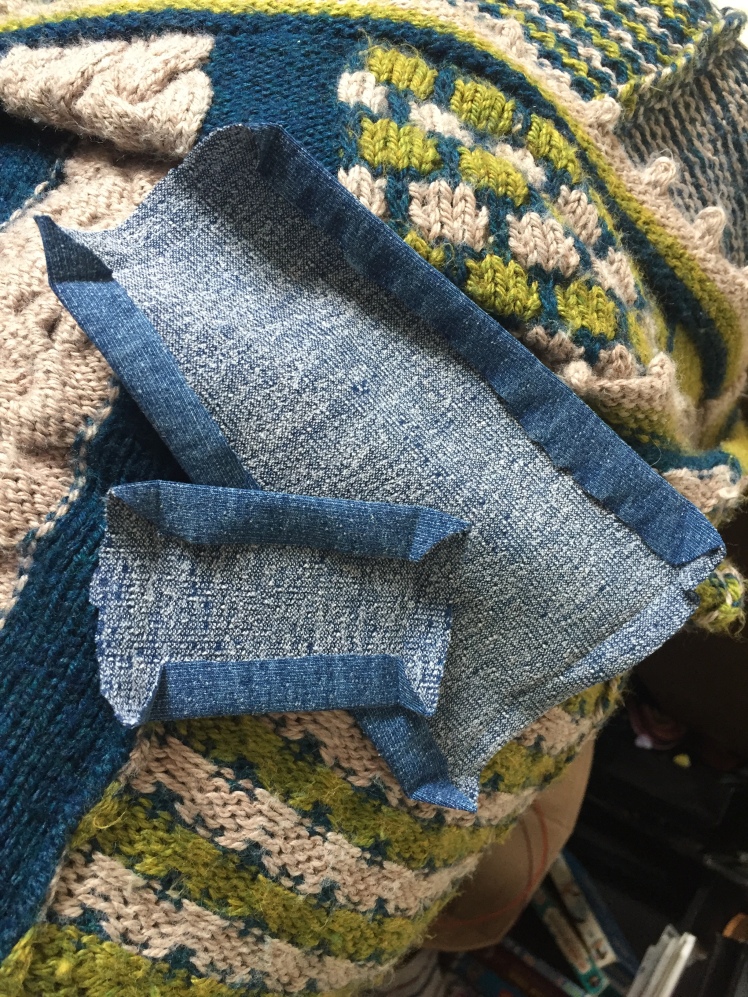 Leggings are stretchy, so I needed a stretchy but sturdy material for the patch. I had an old pair of 24 mo jeggings in the repair basket that I hade loved putting on M, but the elastic-cotton blend was wearing to nothing on the inside, and there were too many holes to bother with.

I cut the pants apart, cut away the seams and pockets and waistband and worn out knees and seat, and had plenty left for some substantial patches. I used two of them for this repair: a smaller one for an inner patch, and a larger one for an outer patch. First step was to iron down the edges. 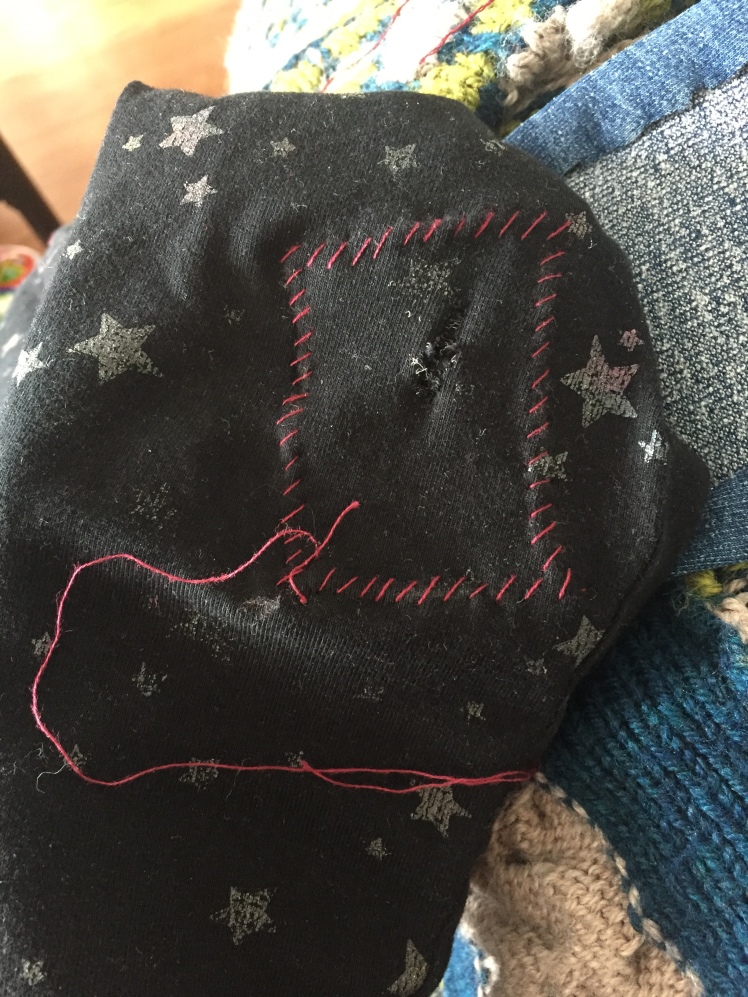 The biggest disappointment (to me) about Katrina Rodabaugh’s beautiful book is that she only uses inflexible materials like denim, linen, and silk. It was a bummer to read in the introduction that if I want to learn elastic stitches, I should buy this other fancy book. But the concepts in the rest of the book still apply. Thankfully I hung onto the sewing textbook from back when my mom taught me to see as a high school class, so between that and google, I figured out which stitches are elastic.

I stuck the smaller patch in and pinned it. It wasn’t straight; I should have fixed it. Oh well. I did it with the sturdier side facing in towards the leg, so both of the more fragile sides of that patches would face each other. I tacked the patch on with the first half of a cross-stitch. 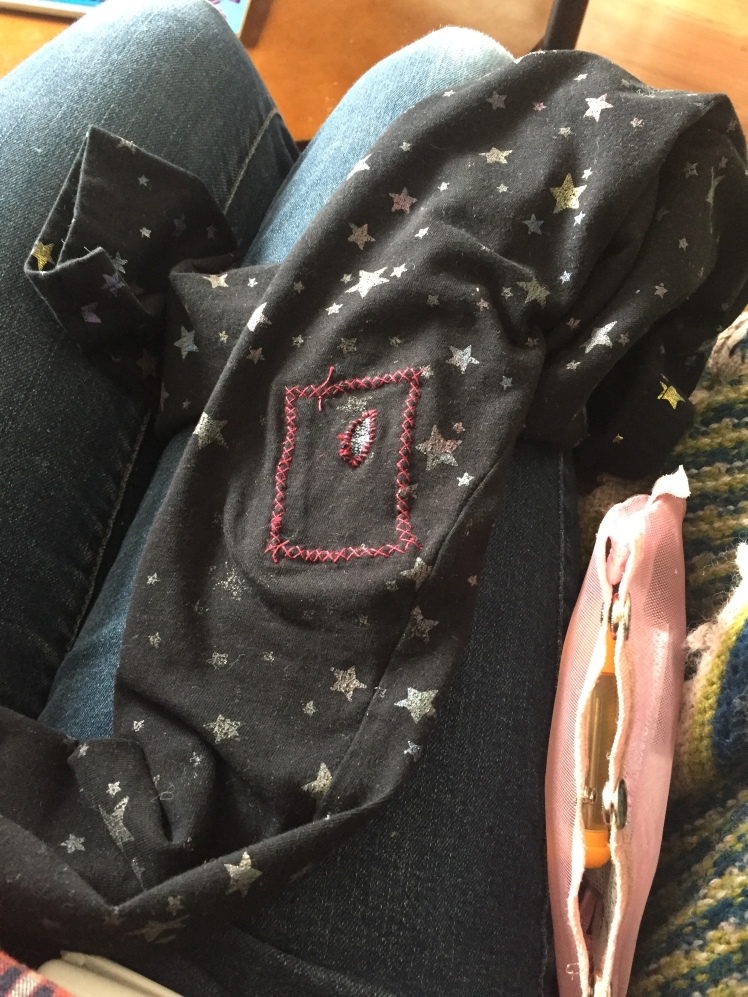 I went around again to finish the cross-stitch (not necessary but enormously satisfying), trimmed the hole, and secured it with whipstitch.

Then came the big patch. I definitely need a fabric marker, but I made do with a regular white crayon. I went around the whole thing with cross stitch.

I was going to do catch stitch on the edge, but remembered as I started that blanket stitch is also stretchy and is way easier. So I went around with that for smooth edges, and added a couple more lines of cross-stitch since it’s such a large patch.

I chose red thread because I thought it kind of went with the fading pink of the stars. But next time I’m totally just doing white.

While I was working, N took my cast off bits of patch trimmings, made clothing shapes out of paper, and taped little patches to them. She loves the idea of patching and was very annoyed that I wouldn’t let her patch all her pants herself.

So at least aesthetically she’s a fan. But would she tolerate actually wearing the pants? She’s pretty sensitive to clothes that feel tight or uncomfortable, so I was worried about how she’d feel with the two layers of patches. I tried to make the inner patch small enough that it would nest inside the outer one, and there wouldn’t be really thick bits where two sets of folded under patch edges were layered, but because I attached the little patch crooked, they totally overlapped.

I needn’t have worried. She wore them to school, to bed… actually that reminds me, I need to make sure she got dressed this morning.

All told that took about four hours of work. That might not sound like much to you, but that’s half of a week’s worth of focused crafting time. Mending takes the same kind of creative concentration that spinning or complex knitting does – at least for the first stages; I can finish an established seam in found time. Mending is important to me, really satisfying when it’s done, and enjoyable to do, but soul-sucking to anticipate. So I have to count the cost. At least until I enjoy it enough times that I look forward to it!

Because I did enjoy it. And it was really cool to see that I could do it. I really hope this repair lasts until N outgrows the pants. So, you know, another week.

These faces getting their favorite clothes back is totally worth it. But when we move, I’m not taking any mending with me. Fresh start!

2 thoughts on “The Bees Knees”