Welcome to our newest nugget. 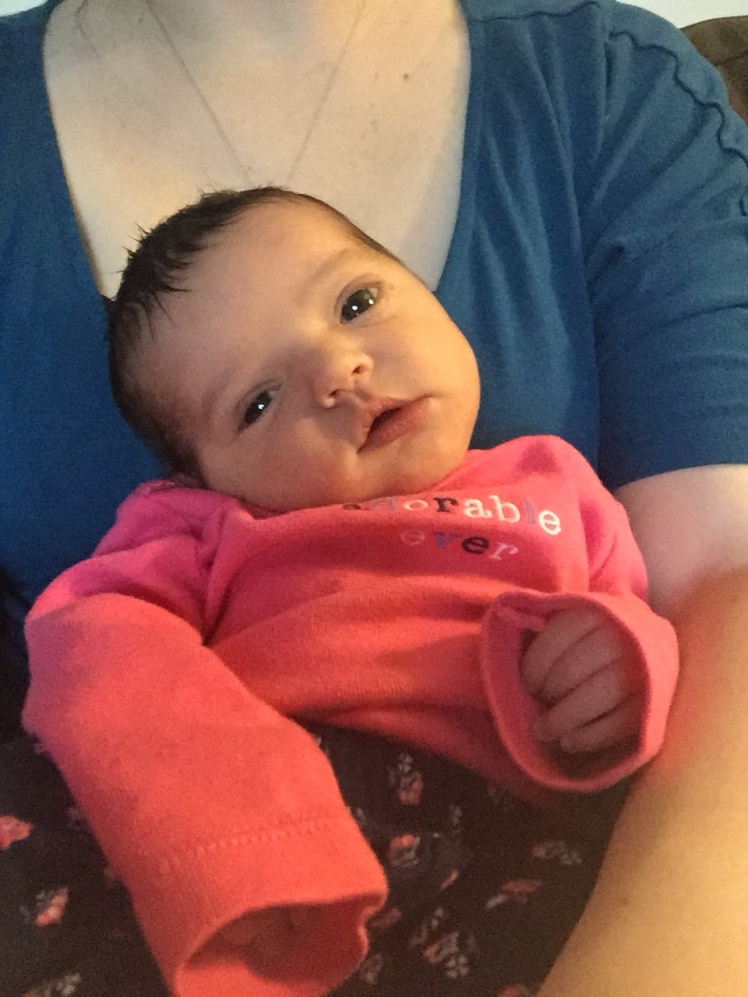 Five days old and she’s stolen our hearts. We are well and she is thriving, but we’re taking things slow as we adjust to the new dynamic and the sleep deprivation.

You may have noticed the password protected birth story above. I am not going to post a public version this time, because we’re pastors now and it is more appropriate for that to be private. But if you are a family member or friend who would like all the details, or if you’re interest for the purpose of education about birth and labor stories, you’re welcome to ask for the password. Below I’ve included a few excerpts, with most of the same pictures of Diana during her first few days.

Curled up on my chest is seven pounds of softly breathing squishyness. Her name is Diana Elisapi. This is the story of how she came into the world.

Photo by Frank Reardon. Qiqiktani General Hospital, less than a mile from my house, where all the babies are delivered for the whole region. I’ve lived here long enough to know some of the people who were models for the mural.

Unlike the other girls, we would be in a hospital. However, everything about this hospital was much more like a birth centre than most hospitals in the south (read: southern Canada and the US). Also unlike with the others, Jared was my only support person. No extra friends; I didn’t seek out a doula; no photographer. We’ve done this before, I thought.

if you’re from Maryland, eating ptarmigan is kind of like a crab feast but with birds.

Those last few days had many gifts. Monday night at ACW, I had ptarmigan for the first time. That night, I finally got a decent night’s sleep. I’d been up almost every night for an hour or two. So I had specifically asked several people to pray for a good night’s sleep, and their prayers were answered. Tuesday I felt great, and had the surprise of lots of help so I could finish Naomi’s kamiik. Wednesday’s uncertainty had the joy of sharing those with her.

Looking back at my mental file of previous birth experiences, on Wednesday I felt like the day before Martha was born. I texted my friend who was first on the list of friends slated to come over and hang with the big sisters when the moment came. It felt serious. I stayed busy, because I wanted things to keep moving. That night we folded laundry, watched a movie, I knitted a swatch.

As a few of you have already guessed, this is the movie we watched. 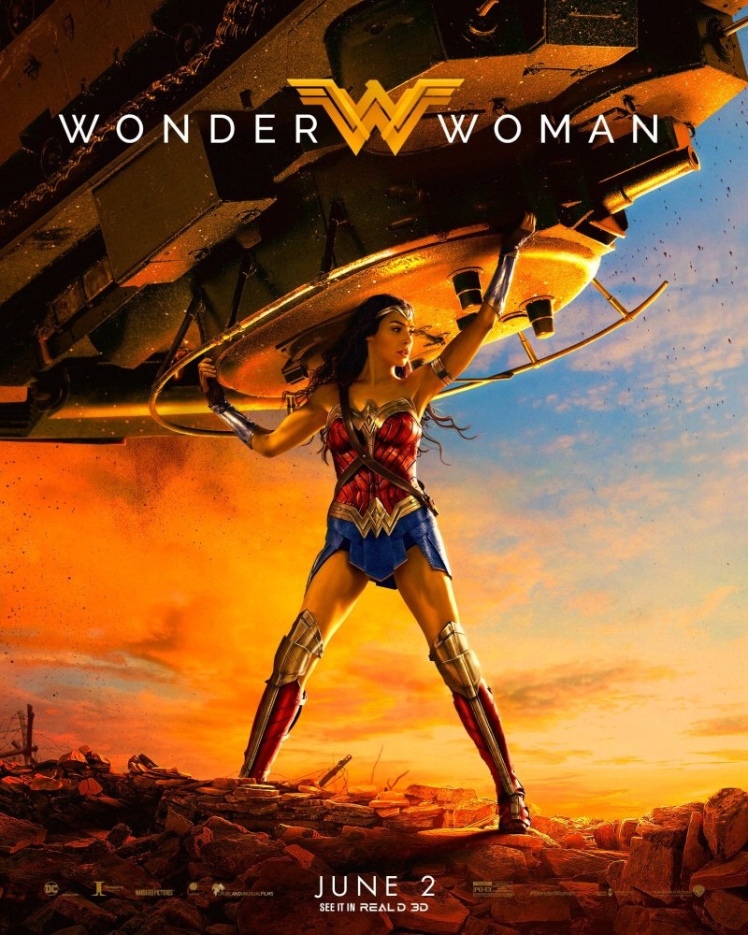 Action movies are my comfort food, and I’ve been watching a lot of them these three weeks. Jurassic Parks, Sherlock Holmes, Tron, etc. During Naomi’s early labor, we watched Tron: Legacy. During what quickly became Martha’s active labor, we watched Hero. There’s no logic to it, just what feels good. That night, I said, let’s watch Wonder Woman. We had loved it in theatres that summer, and Jared had gotten me the blu-ray for my birthday, but we hadn’t seen it again. At the end of the movie I looked at Jared with a mischievous grin and said, “you know, Diana’s a nice name.”

A note about names. In the past, we’ve had a name picked out well in advance, and just kept it private until baby was born. This time we only had a middle name picked out. Elisapee is my anaananguaq, which means something like “pretend mom,” and she’s become very special to us. It’s the Inuktitut version of Elizabeth. It perpetuates our accidental coincidence of non-English middle names starting with E. Reading lots of Elizabeth Zimmermann during third trimester sealed the deal for me. (I’m on my third Tomten jacket.)

Baby’s Tomten. I did manage to get the zipper installed before she arrived.

But for first names, we were kind of stumped. We had one we liked, but it kinda felt like a placeholder. There was a short list of other possibilities, but none that really compelled us. I didn’t think seriously, that evening, about naming a baby after Wonder Woman. But the seed was in my mind for the right moment. 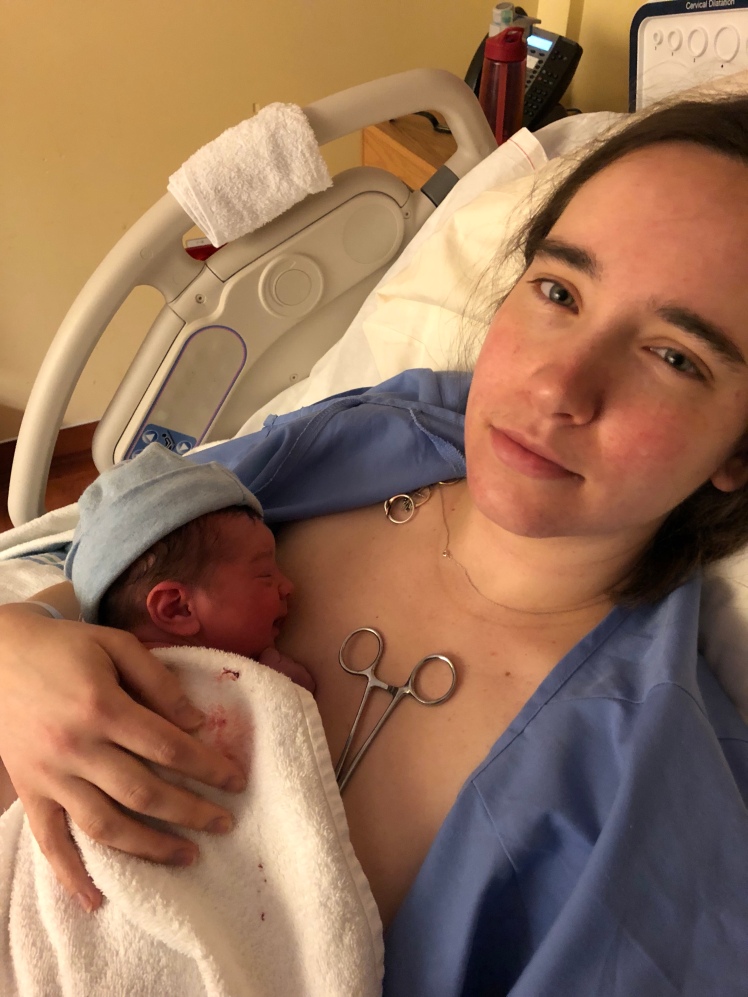 All she needed was a name.

I looked at that face, dark and puffy, and all that black hair. I tried out the names on our list in my mind. “Maybe you are Diana,” I thought. Jared looked skeptical at first, but I gave him my argument.

Since we were giving her a middle name after my northern mom, part of me wanted to name her after my regular mom, but “Linda” had never quite fit for us. Then I heard “Diana.” It’s very closely related to my mom’s middle name, Diane, which she has always liked. It’s where her grandma-name, “Didi,” comes from. It means “divine,” which makes me think of perichoresis, the being caught up in the divine dance of the Trinity, which is the purpose we were all made for. Back on the pagan side, the greek Diana was “the huntress,” which our doctor knew right off the top of her head. Living among the Inuit, I liked the sound of a huntress.

Jared took a while to think about it. It’s a big decision, the name this human is going to be pretty much stuck with. In the end, he agreed. We texted my mom to ask her permission, which she of course gave with texted tears. (Turns out she was up all night anyway with a very sick dog. She’s had a complicated week.) Diana it was. Diana Elisapi.

It’s different, giving a baby a name that you haven’t had a chance to try out for months. It’s different from the other names we’ve chosen, not being Biblical per se, though it’s from Latin, and in Inuktitut will probably be Tiana. Of course, in Inuktitut she will probably go by Elisapi, and if she decides to use that name, we are happy she has that choice. 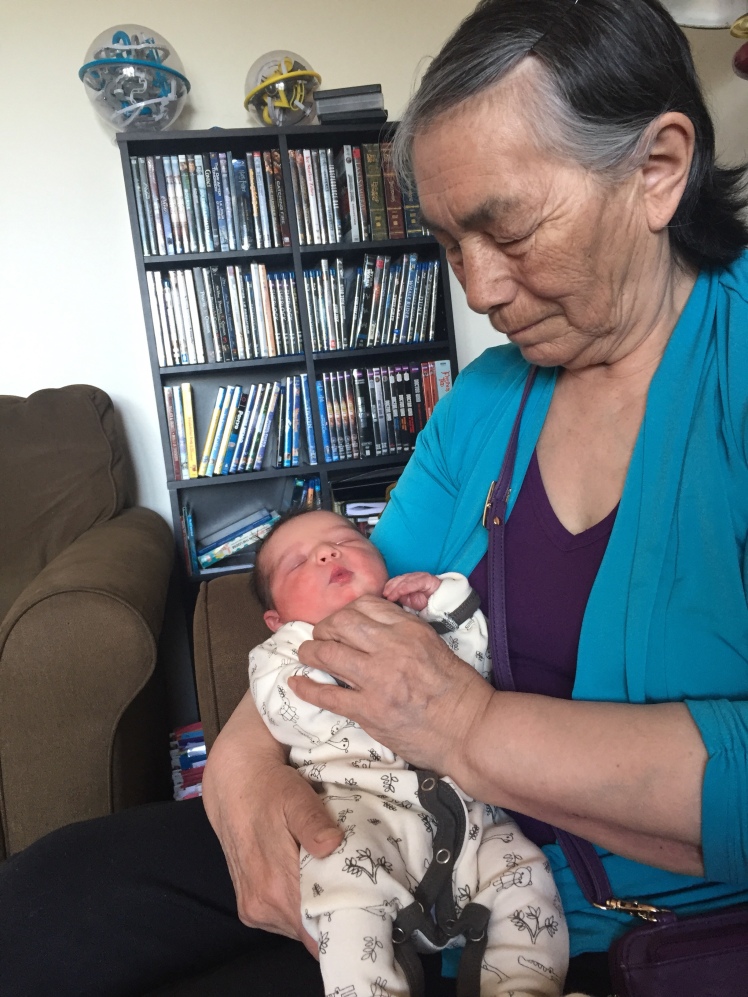 But to us, today, she’s Diana. Baby D. Herself. A third girl, who will never escape constant comparisons to her sisters, but who will find her own way to be very much herself. She has multiplied the love in our family, and we are so much richer for it.

We’re all home now, having asked to go home the same day. Everything medically is going very smoothly. Again I have nothing but thankfulness, both for how well things went and the perspective of the third time round. Diana is as tiny as she’ll ever be, but she’s showing us that she is tough stuff. We’re trying to take it slow as we transition to being a family of five. I’m trying to let go of the normal I’ve worked so hard for in our home for a while. We’re trying to ask when we need help. I’m accepting that I’m going to be a zombie for a while, and that there isn’t going to be much spinning. Taking it slow.

And of course we should! Because our family is bigger. A new person grows our family, our community, the whole world. Diana is a new human, and she has already changed everything. 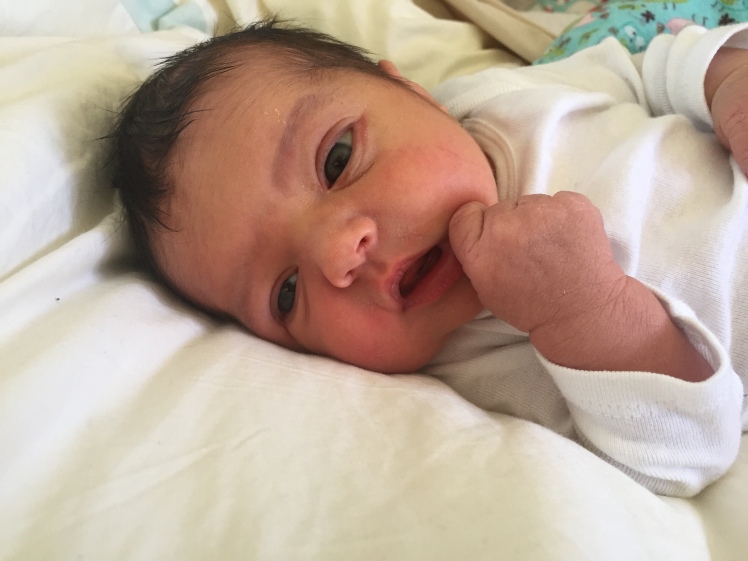