So I have good news and… odd news.

The good news is, we're expecting again. Yay! Babies! To answer all the questions you are too polite to ask: 15.5 weeks at present, due mid-April; for sure just one; everyone says it's going to be a boy, but we'll find out (if possible) next month.

The other news… not bad, but just strange… is that I haven't been knitting. Or spinning. Or sewing. For a solid month now.

This baby, bless him/her, has been a bit of a personality transplant. I haven't been very nauseous (though I was more so six weeks ago), but I've had a sort of low-level feeling of illness that I can ignore most of the time by keeping busy. I only notice it when I sit down to knit.

The even weirder part is, I haven't missed it. It isn't as if I wanted to do all these crafty things and couldn't; for a while there, I didn't even remember why I would want to do something like that. 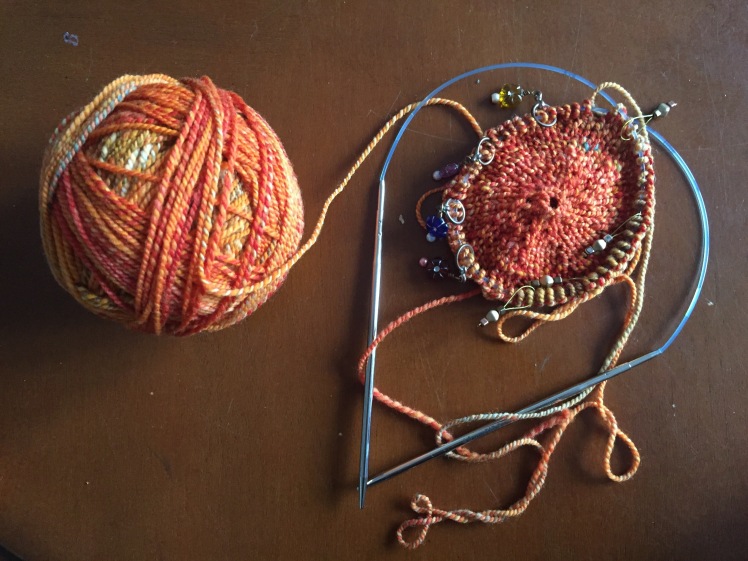 The bit of knitting that has been sitting on the side table, staring at me with the empty eyes of an accusing cow. I finally had to put it away in a drawer because I would feel sick just looking at it. I don't even want to show you this picture, because, blegh. 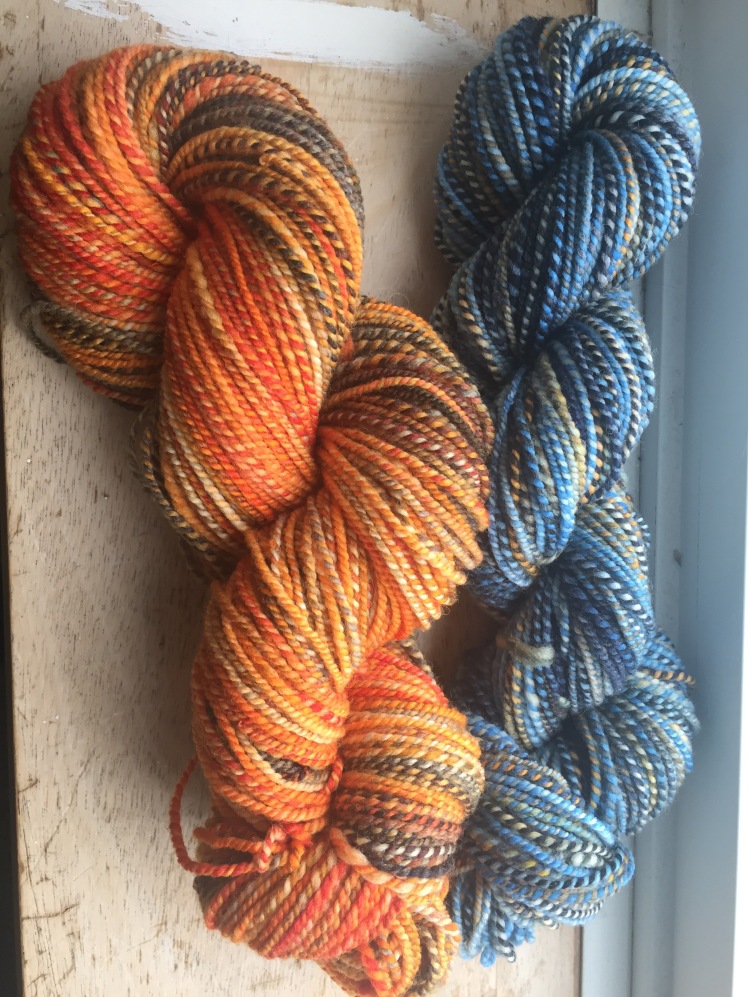 The handspun I made in August for M's vest. I started thinking it was the colors – orange plus blue? But I think cause and effect has worked the other way. Because this project has been making me nauseous for so long, I now cringe when I see anything orange and blue together.

I did get through a whole six ounces of carding before also dropping that like a hot potato. 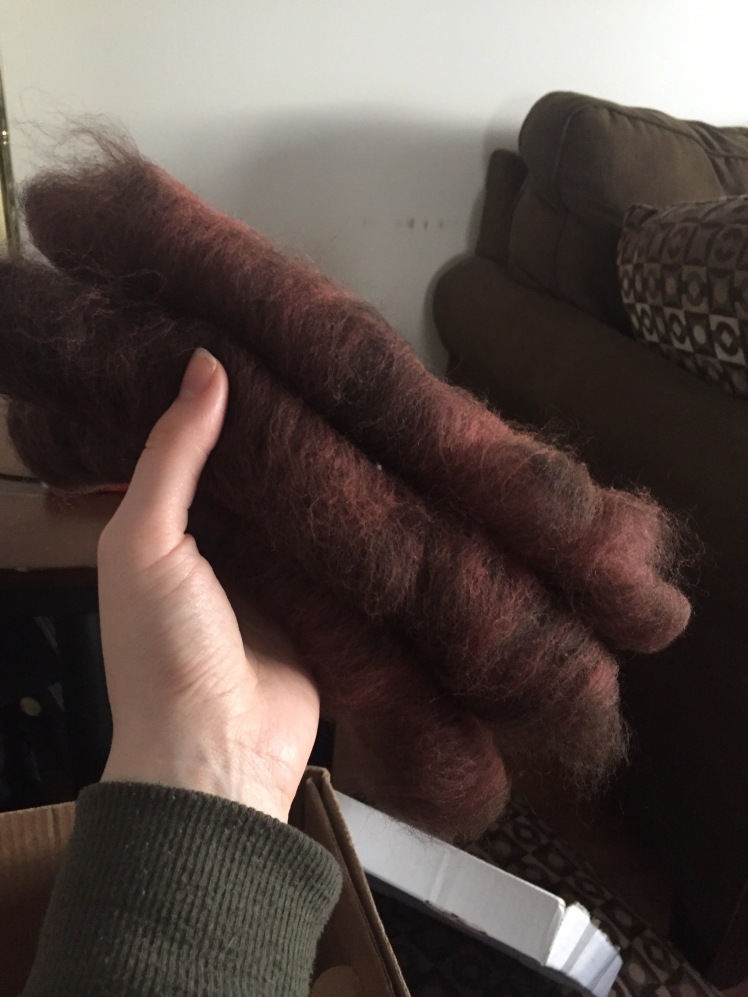 It looks redder in person.

But by halfway through September, I didn't want to touch it anymore. Spinzilla was off the table. I couldn't even follow the action: by early October, even scrolling through Instagram looking at other people's yarn was making me queasy.

I was entertaining thoughts of some sealskin sewing, and somehow talked my husband into buying the skins I need for making kamiik. These are sealskin boots, the pinnacle of Inuit sewing skill, and I don't know what makes me think this is a good time to start some.

So I wasn't crafting, and I wasn't missing it. I wasn't feeling guilty about it. I was just… resting. My body, my brain, my subconscious, were all just saying, you don't have to. It felt less like a disability, and more like being miraculously delivered from an addiction. I'm suddenly physically allergic to the fictional crafting-related obligations I've been laying on myself for years and years.

It isn't as if I haven't been busy, or obsessed with random things. I've been playing a few video games. Oddly, I've been very much enjoying adventurous cooking again. And I've been circling the rabbit hole that is essential oils. But these are all very undemanding things. I could drop them tomorrow with very little consequence.

I mean, in a way it makes perfect sense. I am stepping into a season in my life with more responsibility than ever before: officially outnumbered by kids, first child in school, and some upcoming changes at work with a lot of unknowns. It makes sense that my brain would want to prepare by really letting go of all superfluous sense of obligation.

In January, when I took up spinning with a vengeance, I needed to learn about intention and focus in many areas, and spinning helped with that. Now, I have very little plans, very little concrete intention. I'm very much having to live in the present, one day at a time, because in the most important areas of my life, I don't have a choice but to do that right now.

Part of it is my own fault, for letting spinning and knitting become such A Big Thing. I've been struggling for quite some time with the question of how crafting fits in with the rest of my calling, with the fact that my spinning and knitting community online has almost no overlap with my real life as a priest, wife, and mom in the Arctic. This struggle had become so pressing that it seemed to permeate, almost poison, all of my crafting. One of them had to really lose for a bit, and I'm pretty relieved my subconscious (/the Holy Spirit?) picked the right one. My larger crafting ambitions really had to die.

It's been long enough now that I've started at least thinking about knitting again. I can't quite think about spinning – my new PLY magazine arrived today, and I had to put it away still in its wrapper. I might not be able to pick up that Orange Thing again (I feel like I owe it to M for Christmas, but even typing that makes me blegh, so maybe not)… but I could start something small. Something in bulky yarn. Something for the baby. Something I don't really have to finish. Or not.

At the same time, a week ago I also passed off outlines of my family's feet to an elder friend, and she's going to make kamik patterns for me. Because even though that project is enormous, and time sensitive once I get going, it has everything to do with my real life here.

It's very very strange. This is not the 1001st blog post I thought I'd be writing, and it's taken me these weeks to figure out how to write it. But here we are. Hm.