The real reason for tuning up the CPW, as described in the last post, is that I have a very specific spin I want to use it for. For the first time, I’m participating in a “study” spin-along: a thingie in which a bunch of spinners around the world have the exact same fiber, and we’re spinning it however each of us like, learning from our own and each others’ experiences. This is happening through Wool N’ Spinning, my friend Rachel’s blog-vlog-ravelry-slack-patreon community. If you’d like to check it out, a good place to start would be the Wool N’ Spinning ravelry group, where you can look at the “color and breed study” thread.

For this study, Rachel is leading us in a study of Gotland wool, dyed in split complement colors, prepared as a batt. Katrina over at CraftyJAKs Boutique dyed up some Gotland base in a split complement of purple, yellow-green, and yellow-orange.

This is my Gotland batt. The Gotland base is a perfectly gorgeous grey, which has a huge impact on how it takes the dye. The purple dye was rich and dark, but the green and yellow seemed much lighter, so they didn’t compete very much with the influence of the grey. I was really curious what the same dyes would look like without all the grey influence, so I asked if we could add another breed to the study, one that came in a lighter base. Katrina and Rachel were pleased with the idea, so here are the exact same dyes on a cream BFL. 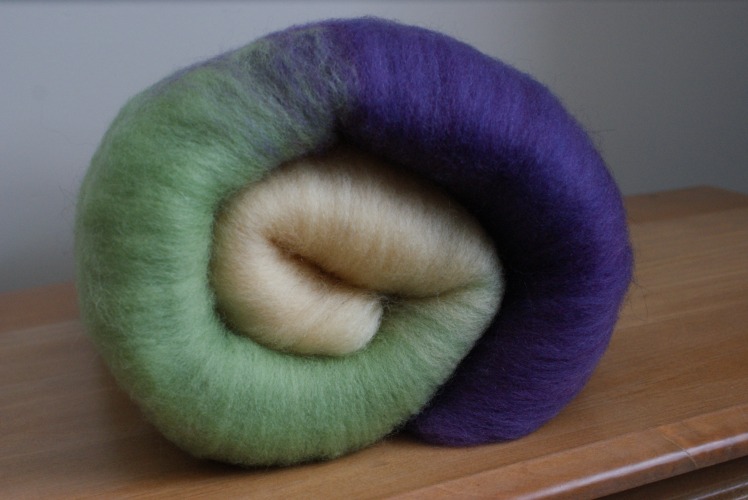 Cool, huh? Katrina has a fantastic color sense and a reflective inspiration; all her colorways are very soothing and thoughtful.

I spent a very long time hemming and hawing and pondering and deliciously deciding what to do with these two batts while I waited for them to come in the mail. They arrived just a week before we went on vacation, and I didn’t want to rush through them, so… I brought them with me. It seemed rather silly to bring fiber down when I was being ruthlessly stingy with my packing for the sole purpose of bringing as much fiber back north with me… but I didn’t want to wait until July, and let the study go by without me. So down it came. CPW is fixed up and had a practice spin, and I was ready to sample.

I sampled off the BFL, because even though the two batts are the same weight, the Gotland was obviously a lot denser, and that would mean less yarn of the same thickness. 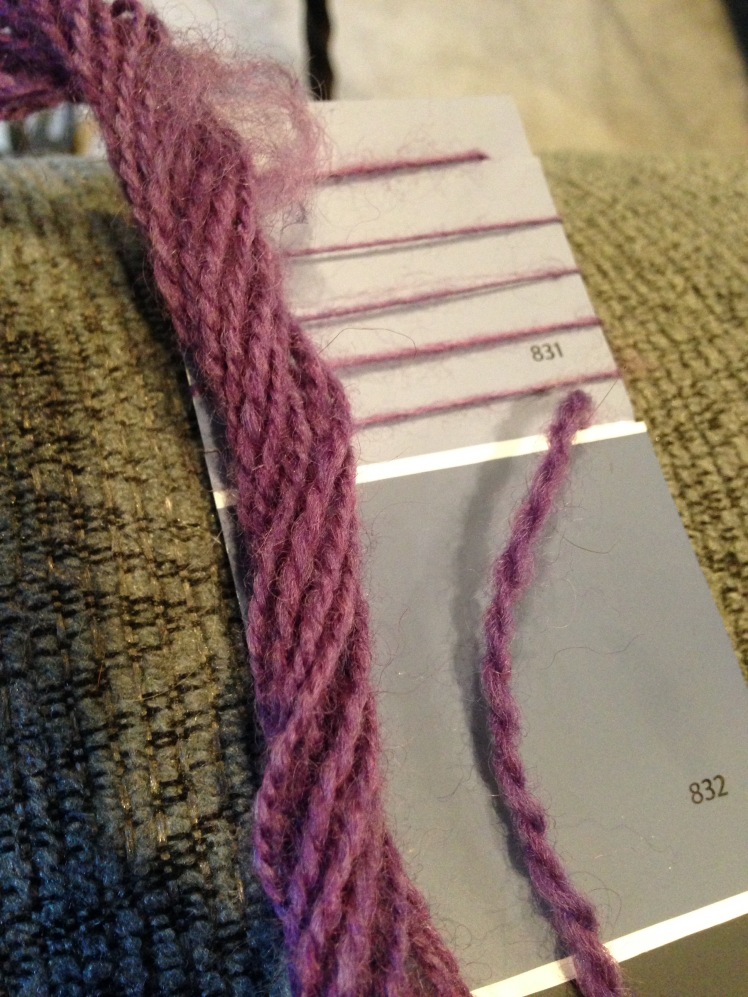 Now is the time to tell you My Plan.

I want to put these two batts together, so that the comparison of color and fiber can be carried all the way through to finished object. The idea that pegged itself in my mind is garter stitch stripes, particularly in the yoke of the Puffin sweater. I would have to cardiganize it, switch it to top-down, and adapt it to worsted weight, but I’m not going to bother my head about such details at this stage.

What that inspiration does give me is some direction about what kind of yarn to shoot for. I wanted two-ply because of how I would handle the colors, but I wanted no-thinner-than-DK so I could leave the door open to spinning a sweater quantity to coordinate with this stuff. Fingering weight would close that door! The sweater inspiration is also why I overplied it a bit. I’m spinning all these singles pretty low-twist, and plying them high twist, so they can be light but strong. This should make a yarn that is as round and sturdy as two-ply can be, but not so overtwisted that it’s unpleasant to work with. I like my sweaters hard-wearing.

With decisions settled about yarn structure, I turned to color. I wanted two gradients to put together with garter stitch stripes. The problem is, when you put the two batts together as-is,  the value contrast takes over the eye. The Gotland just looks dull, and the BFL looks overly bright.

I started matching different colors from the different batts, and came up with color pairings I was happy with. I best liked how the BFL yellow and the Gotland purple set each other off, and the Gotland green with BFL purple were also pleasing. (I apologize for these poorly-lit phone photos; they don’t give an accurate sense of the color pairings.) The BFL green and Gotland yellow I was less pleased with, but the light yellow dye went so subtly onto the Gotland that I don’t know if there’s anything I could do to keep it from just looking grey.

I stripped the batts down, rearranged them, then split them in half lengthwise to spin into a traditional 2-ply gradient. I didn’t want to the colors to line up perfectly – or, really, I knew they wouldn’t line up perfectly, and was happy to embrace that fact, since it would result in a wider variety of color combinations to study. So in each of these pairs of trays, I put an extra yellow strip in one, and an extra purple strip in the other. I’d be CPB-plying the leftover bits anyway, so precision was not important.

I started with the BFL. With all this prep out of the way, the spinning went by in the blink of an eye. I struggled to keep it as thick as my sample card, and was glad to have it handy. It wasn’t my most even spinning, but I wasn’t fussed.

It’s pretty striking to see one finished single next to the tray of yarn that is identical to the one it was spun from. This is why my 8 lbs of fiber stash takes up far more room than my 16 lbs of yarn stash! 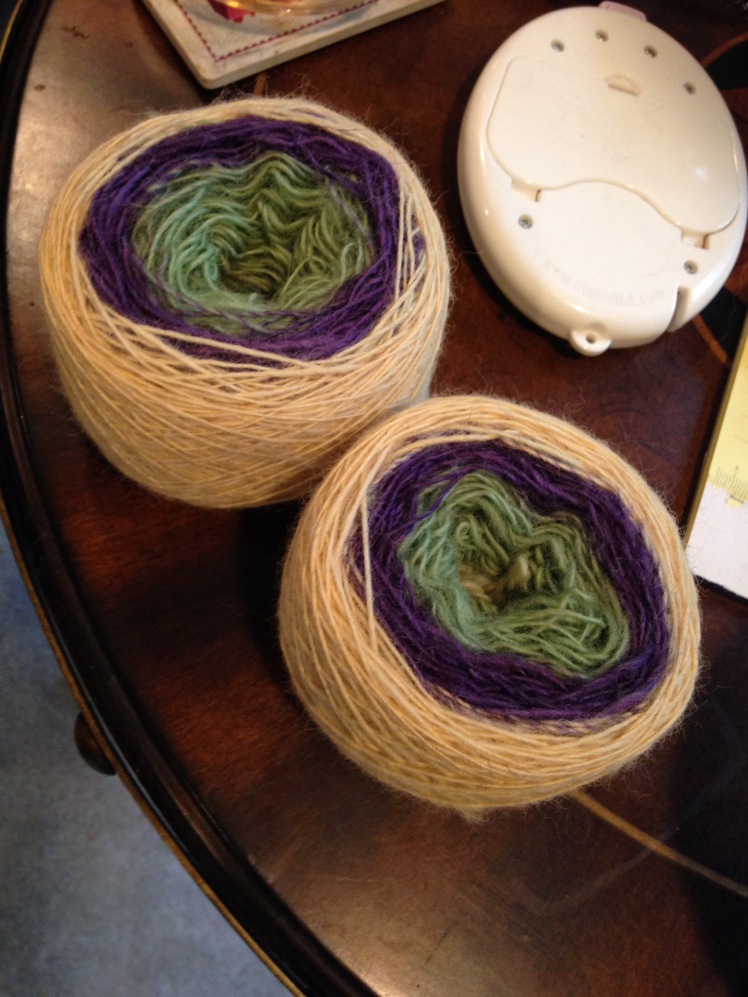 If you notice in the batt, the gradient includes sections of overlap between colors. I had rearranged this batt so the yellow and purple were next to each other, which were at the ends, so they were not carded together at any point. I preserved the sense of gradation with a little bit of combo drafting at the color change. It looks quite marled in the singles, but that was unavoidable with a value change like that. I put the green-to-yellow at the end of the yellow section; I don’t know if I’ll end up using it in the knitting.

Plied with plenty of twist, I got just the finished yarn I was hoping for. Quite twisted, with just a titch of energy still in it after a bath, very round for a two-ply. Not too ropey, since the singles were soft, and the carded prep helped with that as well. Healthy sections of barber poling overlap at each color change, but not so long that they overwhelm the solid-color sections.

So far, so good! Now on to the Gotland. I’ve started, and I can tell you already it’s a very different spinning experience!