I wouldn’t want to give you the idea, from two samples ago, that I dislike purple. In fact, one of my very favorite colors is maroon. By maroon I mean a dark, warm purple; I find this color inviting and dramatic.

Since we did N’s favorite colors last time, I wondered if I could get my favorite color this time? So I took the dark purple for a starting place, then added a healthy dash of the dark red to warm it up, and a splash of bright purple to brighten it.

As I mentioned before, it was time to drastically change things again with the drafting. I had gotten all I could out of the “airlock” draft; this was obviously just compacting the yarn. So I decided to go to the other end of the spectrum and spin over the fold. I have spun over the fold before, but only with fleece in the grease, so doing so from strips of roving was rather the opposite. The picture halfway down this Wool N’ Spinning post was my lightbulb moment, and just about my only guide. (Again with my theoretical research. I just get an idea and get too excited to start, then it only occurs to me when blogging about it that I could have actually put more forethought into it!) As she describes in that post, this woolen drafting style puts a literal core of air into the ply, which should lighten it up a good bit.

I had six strips of color which I ran together through my hands, then broke them into short lengths – about as short as the staple would allow. (Again, guessing this is BFL.) I made a sort of color sandwich out of each one: purple in the middle, red spread out underneath, and the one strip of purple fluffed out over top. I lined them up ready to grab, then for each one, I folded it over my finger (red on the bottom), and tried to draft slipping it over the end of my finger.

I did it all in one ply because I knew it would take some practice, and I wanted to keep at it without interruption. It sure did take practice. The colors didn’t blend easily this way, and trying to make them do so made me fight more with the draft than I should have bothered with. Even so, there wasn’t much combining, and the colors tended to dominate one at a time. 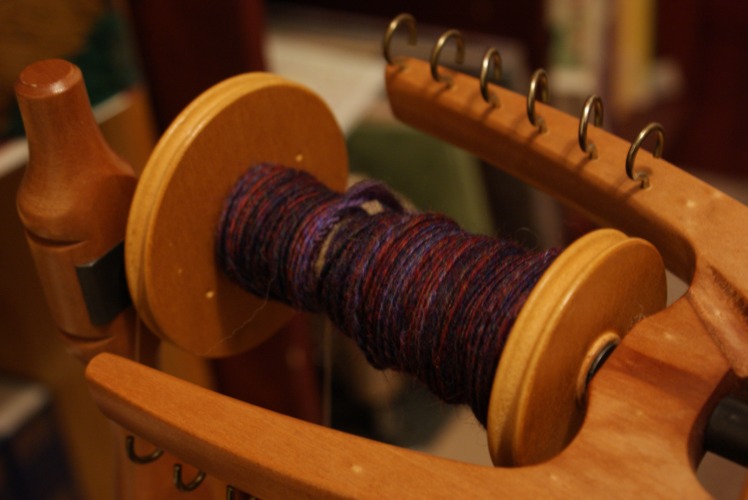 There were, however, some really sweet moments when I was just drafting with one hand, pulling back, the drafting zone slipping perfectly over my left fingertip. That was so cool! And as it turns out, I actually really like the effect of the colors taking turns being dominant in the final yarn. It’ll make the yarn look more variegated than heathered in the knitting-up, I expect, but that’s fine as a feature, and the colors still mix well to give that overall maroon impression.

As you see, this was some kind of a breakthrough. I finally hit the magical 9 WPI after blocking, and the grist is much lighter. Still not that close to what I’m used to from commercial yarn (I am used to seeing ~800 YPP from worsted commercial preparations and more from woolen), but 624 is a LOT closer than in the 400s! 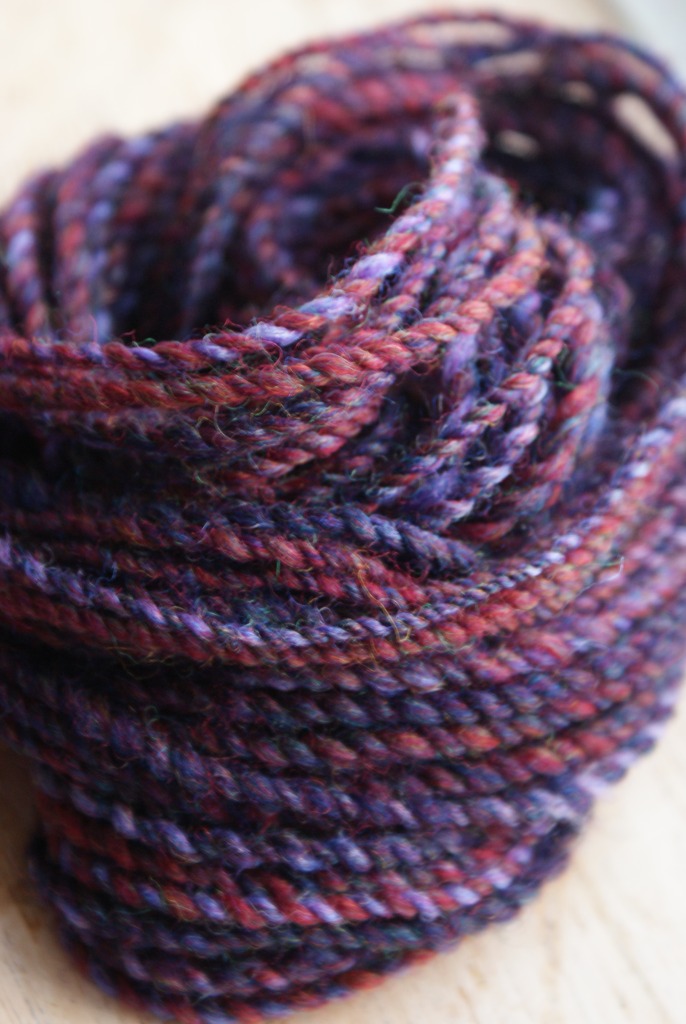 This was a dramatic improvement, but I was still confused by the relatively heavy grist. I couldn’t draft any more woolen than that with this combed top! How could I get it lighter? Finally it occurred to me that, maybe the problem isn’t with the draft, but the amount of twist…